Decadent Philistines... Kinda Phone it In....

I learned something today, and that is when one is raised in the Pacific Northwest, year-round access to all types of (real) crab is something that one takes for granted.  However, in the desert of Arizona, that is NOT the case, as trips to three different grocery stores proved.
I had PLANNED to have Old Ebbitt Grill crab cakes for our appetizer tonight.  That didn't happen.  Yes, I could have bought a few dungeness babies or a handful of king crab legs.  But I didn't want to go through all the effort of cracking/shelling them just for a bit of meat.  And by "bit" I mean an entire pound of jumbo lump.  So we didn't have them.
But we did have a lovely duck.  Together, hubby and I made canard a'la orange.  That called for AN ENTIRE CUP of orange liqueur.  Holy smokes, that was a LOT of booze.  I don't think it cooked off completely, but that might be because the smell of it still lingers in my nostrils.
There also wasn't enough time for dessert, so hopefully Sunday afternoon will bring company, which will also bring the excuse to make said dessert (Aunt Paula, I'm not gonna let you down!).
Of course, what is New Year's Eve without the bubbly.  Tonight, we had a bottle of prosecco, an Italian sparkling wine that has small, soft bubbles.  It was a nice, crisp, apply bubbly that would really go well with anything.  Of course, sparkling wine (champagne, prosecco, cava, etc.) goes with EVERYTHING... or by itself, really.  And thank goodness I had the foresight to get two bottles, so we have one in reserve.  In case of emergency.  Or weeknight. 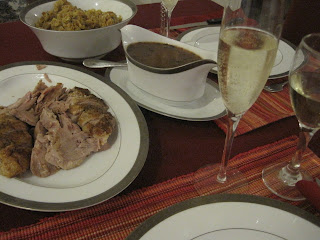 We also exchanged gifts this evening, as we didn't feel like taking items up to Michigan only to have to bring them back.  I got hubby a bottle of vintage port.  This particular vintage, rated extremely well by Wine Spectator, was "born" in 2000, the year we met, and it was bottled in 2002, the year we married, so it has somewhat of a special tie to us.  I also got him wine for our first Christmas together ten years ago, so as we also age, so does the wine.  I.... I received a Shake Weight (serves me right for threatening to get that for him for a year... actually he did get one from someone else, so we are even).  I also got an awesome running jacket, so I'm excited to bust that out, especially because 1) I ate way too much today and 2) it's freaking cold here in AZ lately! 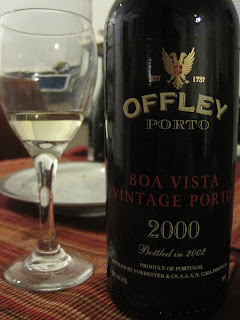 I kind of wish we had just snacked on the pan scrapings of the duck, as they were soooooooo good!  I feel like adding the orange gastrique took away from their ducky, salty goodness.
That being said, we have approximately 6 ounces of duck fat chilling in the fridge now, so the decadence can continue into the next decade of the millennium.
Posted by Allison No comments:

For anyone who has never taught high school, you should know that final exam time is hectic.  Thus, the entire month of December, having both finals, Christmas, and (for us) a trip to Michigan, there really wasn't a lot of great eating.  There were some pretty good things thrown in there, but I admit that more than one meal may have consisted of M&Ms while I was grading or prepping for next semester.  And, certainly, one doesn't plan to go on vacation and follow any food rules (yes, Jillian Michaels, I am talking to you!).
So, after three weeks of sugar and more red meat than I care to confess, it was a week of vegging - the good kind.
Our CSA didn't deliver over Christmas (hey - those guys work hard and deserve a little break, too!), so I had to slum it at the grocery store.  Thankfully, Sprouts has a good produce selection, and I was able to pick up ALMOST everything that I needed for the week.
We had some leftover sweet potatoes, radishes, and turnips, so I made the following menu for us this week:

That brings us to today.  I made a veggie pasty filling on Tuesday when I made the ravioli, and after HRH went to daycare, I made the dough.  Instead of potatoes and carrots, I stuck to the turnips and radishes.  I am looking forward to trying this, and my fingers are crossed that the crust isn't too dry, as some of the reviews said.  I am chilling the dough, so I'm hoping all turns out OK.  If not.... well, NYPD Pizza is not that far away.
But what about New Year's Eve?????  Well, let's just say, for now, that the plan is to be decadent philistines.
Posted by Allison No comments:

Clearly, December hasn't been an "eating well" month.  Between finals at work, setting up courses for spring semester, and then Christmas, there wasn't much "well" being consumed.  However, I did learn that Peeps are gluten free, so I'm going to put that in the "win" column.  Otherwise there won't be anything.
No fear, though - I have a few things up my sleeve for these next few days!
Posted by Allison No comments: