Friday I had my six-week follow-up with the ortho. While I'd been in to get my stitches out and see the PA, this was the first time since the day after surgery I've seen the surgeon.
It was all good news. He was very pleased with my progress and my range of motion.

But more importantly, he said it's time for me to move more.

This week I'll be asking my physical therapist for some strengthening exercises I can do in the pool. I don't think I'm up for doing laps, even with a kick board, but I can definitely add in resistance work in a low-impact environment.
Right now, I'm only allowed to use the stationary bike, but I can add resistance and time to that. But when I see the PA in four weeks, it is a "definite possibility" that I'll get the go-ahead to get back on RuPaul. I'll content myself to hopping on the stationary at the gym when I'm there to hit the pool now.
As far as a running timeline, my goal to start the Couch to 5K program in late September, so that I can complete a 5K in November, was met with a positive response as well, and my ortho said that as long as we have no set-backs between now and then, he sees no reason for me not to plan that out.
For now, just walking less than a mile is still challenging, but my goal is walk Zooey three times a week (every day is too much at the moment) and little by little build myself up to walking far and long enough to start adding the running component on September 20.
It's been a long year-plus, but I'm starting to see finish lines again.
Posted by Allison No comments:

Walking a Mile (Almost) in My Shoes

Though I've done almost zero running for over a year, I've been trying to keep a regular walking (and when it's cooler, hiking) regimen with Zooey. Just because girlfriend is 7 doesn't mean she is slowing down, and so we walk.
Until my surgery, that is.
Obviously, walking any dog while on narcotics and crutches would be a terrible idea; as such, since the morning of my surgery, Husband has taken over dog walking duty. Even after I was cleared to drive, I wasn't stable enough to walk a dog who might pull unexpectedly. And certainly a fall is NOT what I need right now.
Last week, though, my physical therapist said I could walk Zooey. As long as Husband went with us in order to make sure nothing tragic would ensue. With HRH headed out on a trip with her grandmas this weekend, it was perfect timing. We could take Zooey on her regularly scheduled morning walk without trying to bring a 6-year-old along as well.
Friday was my first foray, and we went on what is basically a normal weekday walk route (on weekends we tend to take Zooey through the park down the street). Even though we cut it a little short, I was exhausted. I was out of breath and needed to stop every once in a while. When we got home, I couldn't ice my hip quickly enough.
It's amazing how quickly we lose any endurance, really.
But that doesn't mean I wanted to keep Not Walking Zooey, so Saturday I got up (after sleeping in, another perk of HRH being on holiday without us) and took her for a shorter loop around our neighborhood.

Without Husband chaperoning.
It's not that I don't like spending time with him, but it was exhilarating to exercise a little more physical independence again.
Yes, I brought my phone and RoadID with me. I'm independent, not reckless.
Over the course of the walk, we encountered two kitties, one dog who JUMPED his fence to try to get at Zooey, a beagle  on its walk that Zooey really, really wanted to meet, and a woman walking two black fuzz balls that may have been long haired chihuahuas. But not once did Zooey pull or jerk me. She was, for the most, a model of a canine good citizen. 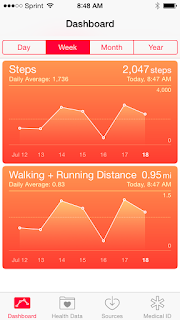 We walked .95 miles. I took 2,047 steps.
It wasn't even a mile.
It certainly wasn't a marathon.
It was just far enough for me to start getting tired, so that route will serve as my starting point as I work to build endurance. I need to be able to walk comfortably (and maybe a little more quickly at some point) in order to being the Couch to 5K program. Sure, when I started running I didn't follow a plan and just kind of went with what felt right, but this time I'll be starting from an even weaker fitness level, so I'm going to do it carefully, under the guidance of my ortho and my physical therapist. My goal is start the program on September 20, which will allow me to complete it for a 5K in November. We'll see what my ortho has to say when I see him next week.
Until then, I'll be out walking with Zooey.
Posted by Allison 2 comments: