I really am not a fan of basil.  It's always been such an overpowering flavor for me, so when I have something made with the ubiquitous herb, I often have trouble tasting anything else (I feel the same about anise/licorice and rosemary).
Of course, this means that one item is generally off limits in the house: pesto.  I like all the other ingredients - pine nuts, olive oil, and garlic - but that crafty member of my beloved mint family just overshadows all those other tasty flavors.
Enter arugula - that peppery leafy green of which Martha Stewart is so fond.
When we started receiving this aromatic (also popular in Italian cuisine) from our CSA share, we had to find different ways to serve it over the several weeks.  Otherwise, arugula salad was going to get reeeeeeeeeeeeeally old reeeeeeeeeeeeeally fast.
In one of our several internet searches, Scott came across a fantastic recipe for an arugula pesto that he described with these magic words: basil-free.
The arugula makes it the same vivid green color, but I have to say that the best part of the recipe (I know; you didn't think it could get any better, right?) is the kalamata olives.  They add a fantastic salty, briny flavor that interacts so well to the parmesan cheese that is also mixed in. 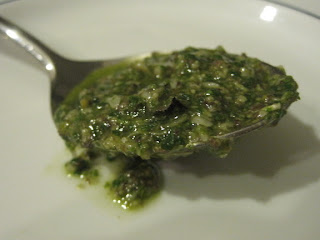 Tossed over warm pasta, this makes nearly a complete meal (I say nearly because I also had a side plate on which I placed a sliced Roma tomato and watermelon; I sprinkled oregano, dried basil - just a LITTLE - salt, pepper, and parmesan on the tomato, so we had a little lycopene-umami thing going on).  Of course, we made sure to use a noodle to which the sauce clings - tonight I used casarecce, which remind me of little paper curls.
It was a little hard to only eat one bowl, even as rich as this pesto is, but I have recently made a very conscious decision to only go back for seconds when (a very tasty) pizza is involved. 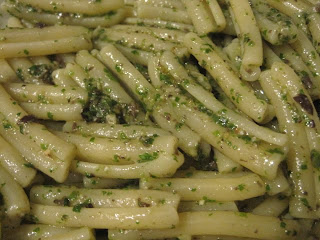 Alas, while the words pizza and pasta may be alliterative and similar in their syllabic make-up, pasta is most assuredly NOT pizza, so after dinner I packed up the rest of the pasta into a storage container (lunch tomorrow!), and I spooned the pesto into ice cube trays so we have several more servings whenever we want.
Posted by Allison No comments:

Would it be Tacky to Say There Was a Fiesta in my Mouth?

I guess that I should also note that I am working on eating less meat.  This is three-fold: 1) we are trying to reduce our carbon footprint, and cutting out meat can actually take more CO2 out of the air than switching to a more fuel efficient vehicle; 2) fewer meat products means better health - I'm trying to think of meat as a side dish rather than a main dish (Michael Pollan's argument of "mostly plants" is what we're looking at here); 3) when I DO eat meat, I want to know that the life of the animal was a normal as possible (i.e., a ruminant that was not fed grain or a chicken that was not stacked on top of its cage-mates) and the processing was as humane as possible.
Thus, meatless Monday has expanded to meatless many days.
Sunday was no exception - with the several Anaheim chiles we picked up on Saturday, Scott made a green chile sauce, which I slathered on top of this sweet potato enchilada recipe that I came across.  We had two sweet potatoes from the previous week that we needed to use, and the fact that we still had some cream cheese in the fridge sealed the deal.
We didn't have the green onions that the recipe called for, but after perusing the comments below the recipe, I noted that a few people decided to add caramelized onions, so that was the end of our last CSA onion  Except that my onion did NOT want to actually caramelize, so I added slightly crispy onions to the mixture instead.
I tried the remnants of the filling after I popped the finished enchiladas in the oven.  While I slightly overdid it on the cream cheese, it was still pretty tasty, and I had difficulty waiting patiently for the timer to go off.
The end result - mixed reviews.  Scott wasn't a fan of the chile sauce with the filling, not being keen on a spicy-sweet combination.  I, on the other hand, could likely have inhaled all four enchiladas that I made and ignored the salad (which used up the last of the heirloom grape tomatoes that I stumbled across at Sprouts). 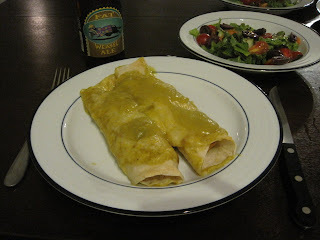 After taking Zooey for a walk, it was then time to start a little banana bread.  Let be very clear:  I do NOT like banana bread.  The ripeness of the bananas that is requisite for any good banana bread recipe is too ripe for me (I like them still a little green and firm).  But Scott loves it, and it's a good use of the several bananas that HRH starts and then decides she is "all done" with after one or two bites (one can only give the dog so many banana treats).  There are actually enough bananas in the freezer to make another loaf whenever this one has been eaten.
Banana bread, as you may know, is not your healthiest treat, often being high in refined sugar, and recipes usually call for vegetable oil, even though you'd think that the bananas would hold their own in the moistness department.
So I was thrilled to find this recipe, which called for only honey as a sweetener AND used whole wheat flour and rolled oats for the base.  The batter came out not quite as thick as I thought it might, and it filled up the loaf pan quite nicely. Of course, I can't say how it tastes, but it came out of the oven perfectly browned, and the smell was quite nice.  In hindsight, I would have thrown in some cinnamon, but I'll make sure I do that next time.  Scott likes it and has already eaten a fair amount for his breakfasts, so I'm calling that a win.  When I asked him if it was better than previous batches (one week I was able to make three different loaves with the amount of bananas in the freezer), he said that it tasted pretty much "the same," which was a positive sign - whole wheat can often lead to a denser, dryer product, but with the honey as the sweetener, there was more liquid at hand, and the oats helped keep the loaf from ending up like something that belongs in Fort Knox rather than the kitchen. 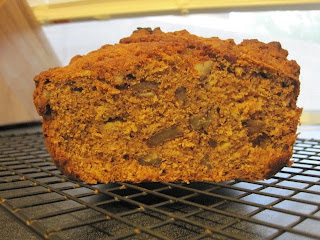 Next up in the baked goods department is an attempt at biscotti.  We pick up our veggie share from Bergie's in Gilbert, and they offer Bad Boy Biscotti.  I can't help but indulge each time (the lemon lavender that I had last week is thus far my favorite, but there are a few that I haven't tasted yet), and I don't want my pocketbook to run away from me, so it's time to see what I can whip up at home.
Posted by Allison 1 comment:

OK, I've been blogging for quite some time about life as a new momma (well, after almost two years, it's not that new anymore, but each day is a new experience still).

Yet, there is more to life than being a momma, so the time has come... I've started my second blog, another online, oh-so-public diary, this time about all various and sundry items that I stuff in my face and the reasons behind said stuffing (some noble, others... not so much).
I fully admit that I have willfully stolen the title for this blog from one of my husband's favorite things to say when we, on the rare occasion, go out for a truly fine dining experience. Whenever asked how the meal was, he always responds that, "we dined like decadent Philistines."
But then again, why can't we always dine so grandly? Since joining our CSA and receiving veggies I would perhaps never have given a second glance (had some of them even been allowed to take up space from the ever-present apples and broccoli) at the grocery store, our family has been pushed to find new and interesting recipes to make at home.
I think it's important that I make a point of stating that I am NOT that type of blogger who posts her own recipes. When I do try to make something up, I don't, um... pay that much attention to how much of something I toss in, preferring the "that seems about right" method (and I know too many people for whom this works perfectly to stop). I am more than happy to steal and then tweak those recipes that I find throughout the internet to suit my purposes. I will gladly share those links here as well as what I have done to make that recipe, in my humble opinion, better.
Additionally, it might be only proper to set forth my objectives for creating this blog:
Thus begins our little journey.
Posted by Allison No comments: