It was only recently that I began running, and the genesis was for my favorite cause (see below).  I'm not sure why I like running now but couldn't stand the thought of it a few years ago.  It's not like a lot has changed in the running world in terms of what you do (left foot, right foot, repeat).  But I truly do enjoy it now, whether it's amid 30,000 others in Tempe or all alone save for my canine running buddy along the canal.
I run for one main reason - to help others.  Yes, it's great that my pants are smaller now, but when I select a race (er, run - I don't sign up for competitive events), it is to help those who might not be able to walk half the distance I am fortunate enough have the ability to run, hike, or just plain walk.
This page keeps track of the events in which I've participated, with the most recent race date and my official time (if any) noted.  Of course, this list is fluid and forever changing. The Undy 5000
(November 19, 2011 - 27:21, 105th overall, 45th women's, 11th division)
This run, a 5K presented by the Colon Cancer Alliance, honors the memory of my dad, John Paul "JP" Jones III, who lost his fight with colon cancer in 1999.  One of my middle school teachers also fought - and beat - colon cancer.  This my "signature" event, and if I ever get to the point that I can't do some of my other events, this will be the last to ever be sacrificed.
Of course I love the tongue in cheek nature of the title.  Unlike most runs, which offer participants a t-shirt of some sort, the Undy 5000 gives away "boxer" shorts with the event logo.  It's even sponsored by Dulcolax®!
But (or is that butt?  Get it??  Colon cancer... butt...) in all seriousness, colon cancer is still a cancer that requires awareness.  People are embarrassed to talk about "that part" of their body.  I've met people who didn't know what a colon was (either kind, which, as an English teacher was mortifying to me on several levels).  Colorectal cancer is so amazingly preventable, and I have made preventing it for myself, my family, and total strangers a priority in order to focus the grief I still feel over the loss of my dad into something positive and beneficial.
(October 30, 2010 - 25:46, 111th overall, 34th women's) 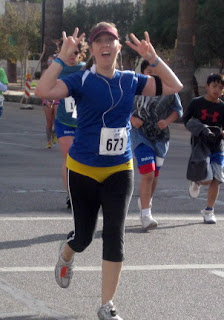 London's Run
(January 28, 2012 - 2:13:59, 257th overall - Half Marathon)
The first London's Run was scheduled to help London Solomon's family raise money for their daughter's medical bill's, but London passed away before she could see her supporters participate in that event.  Since then, it has benefitted children at Phoenix Children's Hospital who are fighting cancer.
The first year I ran in the 10K, I was fortunate to run with three co-workers, whom I consider friends.  We ran to support another co-worker/friend whose daughter, Lily, was fighting bone cancer and is now (thankfully) in remission.  To know that I work with such caring souls is a wonderful feeling.
The second (and last) year, I ran the half marathon by myself, and I had planned to run to give thanks for Lily's remission.  Then London's mom spoke, and I realized I can't be just thankful until all those kids with cancer are also in remission.
While I love the Undy 5000 because of my own association with colon cancer, the local nature of London's Run had such a great impact on me.  I loved this event and am sad that it has come to an end.
(January 29, 2011 - 58:49, 223rd overall - 10K)


Dakota's Run
(February 12, 2011 - no official time, approx 32 minutes, WITH jogging stroller)
I ran this with my friend Veronica, who is the one I blame give credit to for convincing me to start running in the first place.  Dakota and her family are members of Veronica's church; at four years old, she is fighting leukemia.  The race was created by the church's FCA chapter, and it was lovely to see such a large community of support for the family. 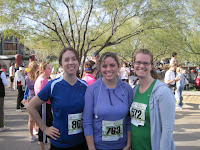 (March 5, 2011 - 58:08, 149th overall, 69th women's, 10th division)
Ryan House offers pediatric palliative care in the Valley.  This 10K will forever be known as the race with the Never Ending Hill of Death, but perhaps I'm just a wimp.  Compared to the children whom this run benefits, I really am a wimp.
Set in the outskirts of the Valley, the run had a really really really really realllllllllllllllllly long hill.  But the end was great - all downhill!  And again I ran with co-workers/friends.  I just love having such fantastic built in support, and I love that they run for the same reason I do - to help others who need it.  My friend Christie introduced me to this race; she and her family will be using Ryan House occasionally, and I am honored to help support Ryan House as well as Christie. 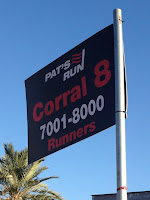 Pat's Run
(April 21, 2012 - 40:09, 6623rd overall, 1973rd women's, 679th division)
Pat Tillman played football at my alma mater, Arizona State University, before starting his career with the Arizona Cardinals (I had the good fortune of seeing him play before he graduated).  However, after the tragic events of September 11th, 2001, Pat gave up what could have been a lucrative career in professional football to join the US Army.  He was killed in Afghanistan in 2004.
Whether or not he was destined for the NFL's Hall of Fame, the sacrifice that he was willing to make - and ultimately did make - in lieu of earning millions of dollars makes him a true hero.  His run, sponsored by the Pat Tillman Foundation, helps raise money for the families of other military heroes.
(April 16, 2011 - 38:24, 5411st overall, 1476th women's) 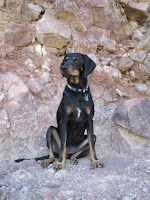 Now, for my mascot - Zooey Glass, a.k.a. Zooey the Devil Dog.  Named after the brother in the Salinger novel Franny and Zooey (it is, after all, really a girl's name) she is a black and tan coonhound mix.  She used to get two walks a day, but she easily and willingly became my running buddy.  At a UKC bench show, I was able to show her in the unregistered portion; the judge determined she could "run for miles."  Don't I know it. Sometimes, when my motivation wanes, I let her lead me, picking up the pace (sometimes tripping over her, but whatever - it happens).  So far, Zooey has not participated in any of my events, as she is a little, uh, excitable in those situations, but maybe sometime soon.
Dog ownership is a responsibility, and coonhounds are not the lazy "houn' dawg" on the porch (as I type this, she is, however, passed out on her doggie bed); they need a good deal of exercise.  The adage "a tired dog is a good dog" applies very well to them.  However, if you have an active lifestyle and a little bit of patience, consider a coonhound companion.