What Makes it Great

On Friday, I saw the PA at my ortho's office for a checkup. The last time I was in, the ortho said that this visit would be a deciding factor about when I'll be able to start cycling, running, and swimming again.
My range of motion continues to improve, and Jeff, my PA, was really pleased with how my muscle strength was coming along as well - I'm actually getting quad definition again, which means my muscle atrophy is receding, and my left leg is starting to become more equal in strength as my right. This is key for getting the go ahead for all activities.
That said, I'm not quite ready to put my improved joint to the test, and it may be a few more months before that happens.
The most important thing is having 100% range of motion back so that I can, basically, learn to run properly again. If I start before that, I'll likely have to compensate somehow, which will, of course, create a greater risk of re-injuring myself.  Additionally, I need to start back with one exercise at a time so that I don't overdo it. Since part of my surgery included repair of the hip capsule, Jeff wanted to make sure that was fully healed, which can take a little longer even if I "feel great and can't wait to start moving again."
So what does this all mean?
For now, I can continue walking and adding distance/time each week (I'm currently up to just under 1.5 miles). I need to continue with my PT twice a week, but as I need to move my hip as much as possible, I do need to do my exercises more often, so doing them in the pool and at the gym are highly recommended. If I keep this up, I should be able to start either cycling or swimming, in very small doses, next month, once I'm three months out from surgery.
Running, which is naturally the most jarring to the hip, will require the ortho's approval, so that's at least another six weeks, when I see him again. That means my goal of starting Couch to 5K near the end of September, in order to participate in a November race, isn't obtainable.
Of course I'm disappointed, but I also understand that I need to be healed and have that appropriate range of motion. My overall goal is to run this year, so even though I won't be finishing my first 5K in almost two years in November, I still have until December 31 to just run. So for now, I'm doing all that I can to get there.
Some people think that running is hard. Swimming and cycling can also be hard. But right now, waiting is probably the hardest thing I have to do. I see a runner out on the canal and wish that Zooey and I were out there, too. When I go to the gym and see someone doing lap after lap in the pool, I want to just be able to go fifty yards. I look longingly at RuPaul, who sits all but abandoned in the garage, and tell her that we'll get out of there someday, but not today.
Waiting is hard. But at least I'm waiting for something. And something is progress. 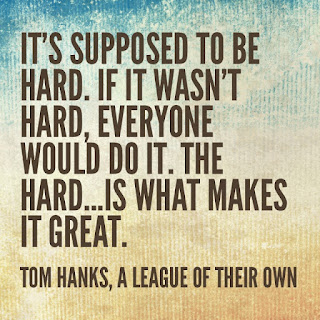 There are these two terriers in our neighborhood that Zooey has claimed as her mortal enemies. She FUH-REAKS OUT when they walk by our house. When we have encountered them on walks, chaos has ensued. I've decided that she sees them as some sort of prey she needs to tree, because every time she picks up their scent, she goes the same kind of crazy as when she's gone on raccoon hunts.
Even at 100% strength, when she goes into full coonhound huntress mode, it's a struggle to stay upright, and that was everyone's concern when I started walking her again.
For the most part, our walks have been great. I think both of us are happy to have that time again, me because Walking is better than Not Walking and her because obviously I'm the cool parent who lets her do things on walks.

This morning, though, she picked up a scent and whoa, buddy, were we off.
Yes, it was those two terriers again.
Maybe I should start calling them "those white raccoons on leashes."
Anyway…
Zooey was hell bent on catching up to them, but the most amazing thing happened.
I didn't fall when she pulled.
In fact, I was able to hold on to her leash (albeit with both hands) and make sure she didn't drag me anywhere.

The last little bit of our walk was much faster than I'd intended, and I'd like to offer the neighborhood a "you're welcome" for being able to serve as a backup alarm so no one was late to work (I guess Zooey needs to take that credit), but it was the first walk that included unplanned instability - as opposed to the stability exercises I do at PT - and I managed to stay upright.
Ideally, I'd already be thinking about 10K an beyond, but in reality, I'm looking forward to the day when I can do a full minute of running intervals while walking. That means I need to find the joy in making progress toward that goal. And while the last year and a half has been frustrating, I'm making progress back to the running and cycling that I love, this time hopefully stronger and better able to meet my goals.
Posted by Allison No comments: