I've now been in physical therapy for five months.
I celebrated by only going once last week.
Just kidding. I had a workshop that conflicted, and since the workshop was required and I don't get paid to go to PT, I obviously spent all day in the workshop.
But even if I had gone to PT, there wouldn't have been much to report. Until I get the MRI results back in a few weeks, we're basically keeping the status quo: Astym®, stretching, various exercises, and the Sproing (once a week only on that one).
The goal now is to continue to strengthen instead of getting me back to running. Of course, MY goal is to run again, but now that we know PT isn't going to do that alone, we need to make sure I'm in the best shape I can moving to the next stage.
On deck this week: my MRI. I'm not sure the medical staff will approve of pictures or humor me by taking any, but I'll try. I hear hospital gowns are in for this fall anyway.

With my two literature courses in full swing, it seems that getting one post per week about my physical lameness is all I can handle.
Last week wasn't much to write home about, in terms of PT. Since I had my ortho appointment Wednesday, we took it easy on Monday, adding nothing and reducing reps when possible (which was also good since I was extremely achy that day). That way, I could go in to the ortho with no flare-ups.
Friday wasn't any different, either. I was glad I was still able to run on the Sproing, even if we haven't changed anything about it over the last month.
Like I said. Not much to write home about.
The bigger news is the ortho appointment. Since I was obviously stronger but with the same pain, my ortho sent me over to get new x-rays so we could take a fresh look at what was going on.
Apparently there's a lot going on.
I have hip displasia.
I have deep sockets, which led to pincer impingement (FAI).
There is more bony coverage from those deep sockets.
Having my legs/hips in certain positions, then, can cause a tear in the labrum (the ring of cartilage that surrounds the socket).
Certain positions like cycling and running.
JOY.
The x-rays were able to indicate a labrum tear only, so in order to have a positive diagnosis, I'll be getting an MRI in a few weeks. That being said, based on my symptoms and the fact that PT hasn't led to any relief, my ortho is pretty certain that's what it is.
Since the odds are in that vein, I did ask about treatment.
There are two options:


Obviously, not being able to run or cycle ever again is not an option, so I am readying myself more and more for the latter. It is possible that cycling will be out as an option for longer than running (or perhaps forever), but if I can make a recovery and start running again, surgery will be worth it.
In the meantime, we're continuing the course of therapy so that I can be ahead of the healing game if I do have to choose Option 2.

Not much changed last week.
Since I have an appointment scheduled at the ortho this Wednesday, Stephanie didn't want to change or add anything in order to avoid possible flare ups beforehand.
So, we did Astym. We stretched. We foam rolled. We did ladders and ran on the Sproing.
I also had an adjustment on Friday, and I cracked so much that I sounded like bubble wrap.
So, the good news continues to be the same. I'm getting stronger, and I'm able to do much more than I was able to when I started.
Additionally, the pain from the run has subsided so I'm no longer constantly wanting to ice, heat, or guzzle anti-inflammatories.
But there's still the bad news: I do still hurt more than before the run, and I'm back to Not Running.
While I'm terrified of what the ortho will have to say Wednesday, I also know that I'm a little closer to having some resolution.
And as long as that resolution includes - some day - running and cycling again, I'll be OK with it.
Posted by Allison No comments:

Being able to run again was exhilarating.
I was on top of the world.

I was a little sore and achy after my first half-mile run, but it wasn't the pain that I'd felt before.
But last Tuesday, the day after my second run, my hip was screaming.
Honestly, it was like I'd never set foot in physical therapy. It wasn't a muscle soreness; this was pain in my bone.

My goal to run twice last week, then, was dashed.
With HRH's schedule including two days of soccer practice plus swim and ballet, there was no way I was able to get in before my scheduled Friday appointment, so I iced and rested and took it easy when I swam (hooray, at least I swam again).
Friday, I was still sore. And basically terrified that I'd undone four months of hard work.
Thankfully, if Stephanie was really concerned, she hid it well. After an intense Astym® session, she instructed me to take it easy and be careful, and I did. I didn't NOT do any of my exercises, but I dropped the reps on a few and went slowly on most, with multiple staff members watching me to make sure I didn't suddenly drop on the floor.
At least I was able to run on the Sproing again, even if it was an alternating walk-run for a mere five minutes.

Plan for this week: No Running, and we'll see how I feel come this Friday.
If I'm not in pain, we'll continue working, but maybe a little more slowly. If I'm still in pain, then it might be time to panic we've decided that I will call the ortho and express….concern about the progress I'm not making with the pain even though I've made considerable progress in my muscle strength.
Of course, I'm a LITTLE more than concerned. I'm feeling much stronger than I have in ages, even before my hip pain began in the first place. And gaining muscle strength in my glutes and surrounding muscles has helped my overall strength, so I'm certain that when I hit the starting line of my next race, I'll be stronger than I ever have been as a runner.
But at the same time, this pain hasn't abated, and knowing that the next steps are injections (which, why even bother; they don't fix anything) or surgery, I'm nervous that I'll have to go a more extreme route.

And since I've never had any surgery more major than the removal of my wisdom teeth, I'm staying awake playing Worst Case Scenario in my head.
So….paws crossed that a week of rest and a bit of a reboot at PT is all that I need.
Otherwise, I'll probably need a hug.

Last week was so promising, as physical therapy went.
But losing Holden threw a wrench into my whole week, so Friday I canceled my appointment so I could take the day to grieve.
I'm not sorry for that decision. I cried a good chunk of the day, so it was good that I was home or with Husband to just let all the feelings out as they came.
But before that - and the emotional eating of all the Cheetos in the land - I was set to have a good week.
How good, you ask?
Stephanie told me I could run.
OK, so technically she said "jog." And only for about a half mile.
But it was running, not on the Sproing, nonetheless, so I chalked it up to victory.
We ran at the middle school near our house; it has a dirt track, and Zooey happily loped alongside me as we logged the slowest half mile in memory (I didn't haul out the Garmin, but I'm pretty sure tortoises could have passed me). She didn't want to stop, but I'm glad we did, because later my hip was achy for some time before calming itself down.
I'd planned to do another run on Thursday but knew Wednesday night that wasn't happening. But Zooey and I've gotten out a few times for a walk, and I'm ready to start truly moving again.
Since the rehab center isn't open for Labor Day, I won't see Stephanie again until Friday, so in the meantime I'll do my home exercises and attempt to have two slow runs as well as my first swim since my lessons finished (with everything that happened with Holden, I haven't hit the pool, either).
Hopefully my nearly two weeks "off" won't reverse my progress, but if it does, I'll roll with it.
After all, each day that I'm moving, I'm still moving forward.
With a coonhound on my tail. 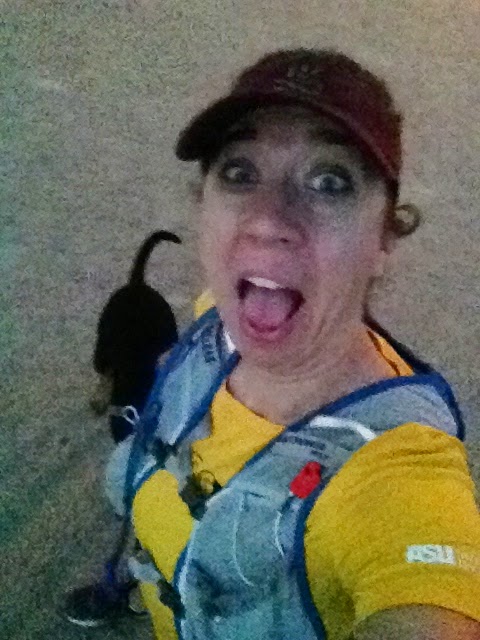