I'm writing this post fewer than 24 hours after receiving a text from my co-worker, Alicia.  Lily's cancer is in remission.  In remission.  IN REMISSION.  It was only 9 months ago that their family's world was turned upside down, and now, while there are still a few more tests that need to be run, I'm overjoyed that the family can now start returning to the "normal" that they once knew.

This morning marked the beginning of my fall race/run season.  While the summer months here in Arizona are far too hot to take even a leisurely two-mile jog, now that the temperatures are now moving back into the double digits (something that nearly requires a state holiday here), I was excited to start getting back into the swing of things.  What better way to do so than to honor my paternal grandmother, Lenora Elsie (Thayer) Jones, who passed away in 1977, before I was born, from ovarian cancer.
Today's event was put on by the National Ovarian Cancer Coalition - Valley of the Sun chapter.  Located at Tempe Kiwanis Park, the race wasn't that far, which is good, because apparently ADOT decided today would be the best day ever to close all of the freeways in the East Valley, forcing me to backtrack twice in order to get there.  By the time I finally parked, realized I was at the wrong end of the park, drove to the correct side, and parked again, I had about 45 minutes to pick up my bib, pee (always important before any race), and get myself in the right mindset before we stepped off.
I'm not sure I managed the last - my frustration at the multiple detours combined with the fact that HRH hasn't been feeling well (read: Mommy has to get up in the middle of the night) set me off a bit, although I was determined to support the survivors of ovarian cancer, who were brilliant in the teal version of the shirt that I received.
I'm not particularly pleased with my time - 33:28 (unofficial - there were no chips for this race), but I did need to walk a few times during the race, so I know I'm not in the shape I should be.
But that doesn't really matter - what was important was that I was able to be a part of an event that helps raise money to fight ovarian cancer.  This is a cancer that, like colon cancer, affected my family and took my dad's mother before I ever had the opportunity to meet her. 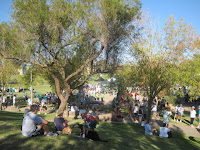 It's also a cancer that's difficult to detect, which made seeing the survivors all the more overwhelming.  I wanted so greatly to walk up to some of these women who were sitting, chatting, in the survivor tent after I finished, but I was so overcome just seeing them that I wasn't sure I'd even be able to get a single sentence out.  I burst into tears when I swung by the NOCC tent to get a magnet and bracelet and mentioned that I'd just received the news about Lily, so I figured I'd be completely unintelligible when trying to say hello and thank you to these women.  In hindsight, I'm sure they would not have minded - they surely have been sobbing puddles of emotion before as well, but how does one say thank you when you are blubbering too much to be understood?
Regardless of my finish time, I'm so happy to be back in the swing of running, and I'm looking forward to supporting amazing causes like the NOCC in the hopes that someday they can be irrelevant.
Posted by Allison