To Sleep, Perchance to Do It Uninterrupted (Part II)

Hi!  It's been a while!
Sorry about that.  Without going into too much detail, the end of the spring semester was wrought with havoc and chaos.  And a lot of stress.  I didn't run; I didn't eat well, and my eczema has been driving me crazy.
Thankfully, that's all pretty much behind me now, and I can turn my attention to the fun things.

So... my sleep study results came in.  I officially have obstructive sleep apnea syndrome.  Or, as my doctor said in our post-study consult, severe sleep apnea.  In fact, during the first half of the night, an average of 63 interruptions to my sleep were recorded each hour.  Each. Hour.  That's more than one a minute (try not to be jealous of those mad math skills).  During that time, most of my sleep was spent in Stage I, which is kind of the halfway point between being awake and being asleep.  It's very light.
Additionally, during the first half of the study, I never entered stage III or the REM stage of sleep.  Stage III is considered to be the most restorative sleep; it's when tissue and muscle repair is done and energy is actually restored to the body.  REM sleep, of course, is when we dream.  It's also vital for rebuilding the immune system.
Well.  If I spent most of my time in Stage I, no wonder I was always tired.  I wasn't actually getting into that deep, restorative stage.

Can I please blame my poor performance at Pat's Run on this?  Because I'm going to.  Right now.

In the second half of the night, I was given a CPAP mask, and when it was determined what the proper pressure was, my interruptions were reduced to 2 in an hour.  I also experienced REM sleep, so I was able to be somewhat restored.

While my doctor did order a CPAP machine for me, he also encouraged me to see an ENT.  As I noted in Part I of this saga, it was noted that my tonsils are huge.  While the shifting that my jaw did during my years of paying for my orthodontist's second home braces and headgear, the fact that my tonsils are indeed so large could be the main issue with my apnea, and because I am neither overweight (I have a BMI of 23.2) nor a smoker, a tonsillectomy is a possible treatment.  While I am loathe to actually have such a surgery, the fact that having it could "cure" my apnea is certainly a nice big carrot.  I'll be making the phone call this week and seeing what the ENT says.  In the meantime, I get to wear the mask at night, which should allow me breathe, although I'll likely have to figure out a new "favorite" sleep position, as stomach sleeping is not conducive to wearing a large plastic face cover.

Today, then, my very own CPAP machine was delivered, and the respiratory therapist walked me through setting it up. 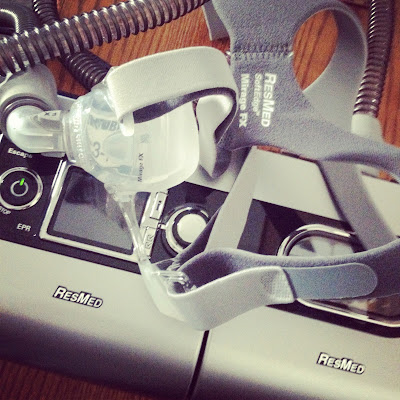 I've decided to name it The Emperor, as I've been joking that I'm going to sound like Darth Vader once I get it.
As you may recall (and if you haven't seen Episodes IV - VI that make up the original Star Wars trilogy, please don't tell me; I may not be able to get over it), it was the Emperor who "created" Darth Vader when Annakin Skywalker chose to go over to the Dark Side of the Force.
Technically speaking I should probably name the device ambition, since in the literary world of tragic heroes, we can define Annakin's ambition as his tragic flaw which truly did lead to his downfall into the Dark Side.
But ambition is a bit too intangible, so I'm going with The Emperor.

And hopefully tonight, I also will not sound like I am struggling to breathe.

I've got an early morning run with Zooey scheduled tomorrow morning (wearing my snazzy new compression calf sleeves for the second time!  Woot!), so we'll see how it goes.  Fingers are crossed that I feel the difference!
Posted by Allison