If you've been a regular reader to his little hobby I call a blog, you'll know that I don't run without Zooey, my intrepid coonhound.  She is my constant companion on the roads and trails, and I hate having to leave her at home when I take off for a race without her.
But her being by my side means that when it gets hot, she gets hot.  And it's gotten hot.  We've already had multiple 100°-plus days, and some of those days have topped out at 110°.
Ick.
Yes, it's a dry heat.  You wanna know what else is a dry heat?  The inside of an oven, and no one decides to vacation there.
Annnnnnnnyway, in order to make sure that I can keep up the miles over the summer but also ensure Zooey's continued good health, I decided to start streaking.
No, I'm not running nekked - Rosencrantz and Guildenstern (aka "the girls") would be all over the place, probably giving me two black eyes, if they didn't have support.  Plus we live down the street from the police station, so I'd probably have quite a bit of 'splainin' to do before I hit the first crosswalk (that would be quite the phone call home, hey?).  I'm just running every day - or nearly every day.  Think of it as a winning streak you can't lose.
Of course, I've decreased the miles on each run in order to make sure that I don't overdo it and end up with shin splints or tendinitis again.  I've been pretty careful, have added some new stretches, and just replaced my worn out shoes with my last two new pairs of my beloved Saucony ProGrid Guide 5s.  Aren't they purty????

Some mornings are great.  I feel like I could run farther, even with the heat already starting to bear down at 5:00; we leave the house between 4:30 and 4:45, depending on how fast I get moving after my 4:15 and 4:15:01 alarms (the second one is Zooey making sure I'm up).  Some mornings, like yesterday, SUCK.  Zooey was restless until Husband got home, and he was at an event somewhat late, so she woke me up and then kept me awake with her pacing, whining, and having to go out to do absolutely nothing - twice - until he pulled into the driveway.  Holden decided he was going to sleep on my pillow, and while I normally love his purring, his subsequent decision to give himself a leisurely bath was, um... irritating.  HRH then got into the game by coming in around 2:30 needing a snuggle.  Normally I would love that, but I was already feeling so tired that I was dreading that alarm.
But I didn't turn it off, as sorely tempted as I was.  I got up, sucked it up, tied my laces up, and got out there.  Three miles later, I was ready to go back to bed, but I was glad I went.  Just like I always am.
The benefit of running every day is that I can be up, get my run in, and then have some quiet time to myself before everyone is up.  Or I can go back to bed for a nap, also before everyone is up.  The latter is generally my favorite this week.  But it's also allowed me to make time for some quick weight and resistance workouts for my legs and arms as well as ensure that I am continuing with my quest to do 100 pushups.  I kept on saying that I'd do yoga or other cross training on my rest days, but I found myself sleeping in instead; it seems so much easier for me to get up when I have to run (I only set my alarm on run days because Zooey has identified the alarm with "we're going running," and I don't want to have her howling at me to get her leash when I'm trying to do a set of skull crushers).  Now, I'm already up, so I have no excuse not to get that strength training in.
Thus far this month, I've skipped two days when Husband was out of town.  I suppose I could have run  when HRH was at school, but Zooey would have had to stay back, and once she realizes I'm putting on running gear, she works herself into a stage of excitement that Cesar Millan would probably tell me isn't healthy for her.  And we could perhaps have taken a quick mile around the neighborhood in the evening, but it stays hot well into the evening, and I didn't want to risk Zooey's paw pads getting burned on the asphalt.  And to be honest, it was only a week into the streak, and my body was grateful for the rest.  But by the time Husband got home and the weekend rolled around, I was anxious to hit the road again.
Yet another bonus - if I did my math correctly (always questionable), I should actually up my mileage from last month.  So if I can keep it up and bump up the daily miles just a little, I can make some good inroads in my goal to hit more miles this year than last, even with the injury breaks I had in the first quarter.  But let's not hold our breath.
For now, I'm hoping to be able to continue my streak until the end of the month, when Husband and I will be headed up north for a few days to celebrate our anniversary (we plan to do some hiking while we're up there, so maybe I'll count that).  After that, we'll have to see. 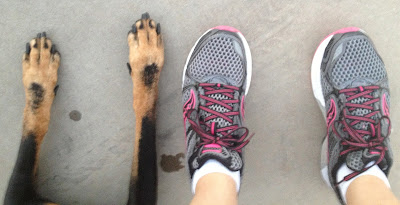