Since I've been unable to run, my physical activity has dropped off significantly.
I still walk Zooey fairly regularly, and I am working to do my PT exercises as much as possible. But all of this together still doesn't burn as many calories as my normal running routine.
It was only a matter of time, then, when Lack of Movement plus No Change in Caloric Intake took a toll on the waistline and the self esteem.
In an attempt to do what I can to alter the part of that equation of which I am in control, I've decided to focus efforts on lowering my refined sugar, grain, and dairy intake (the dairy reduction was more to combat headaches and migraines than anything else) as well as pay careful attention to the actual amount of food I put on my plate at each meal.
Of course, reducing one's sugar and dairy intake means reducing one's ice cream intake, and sometimes, a girl just wants her dessert. 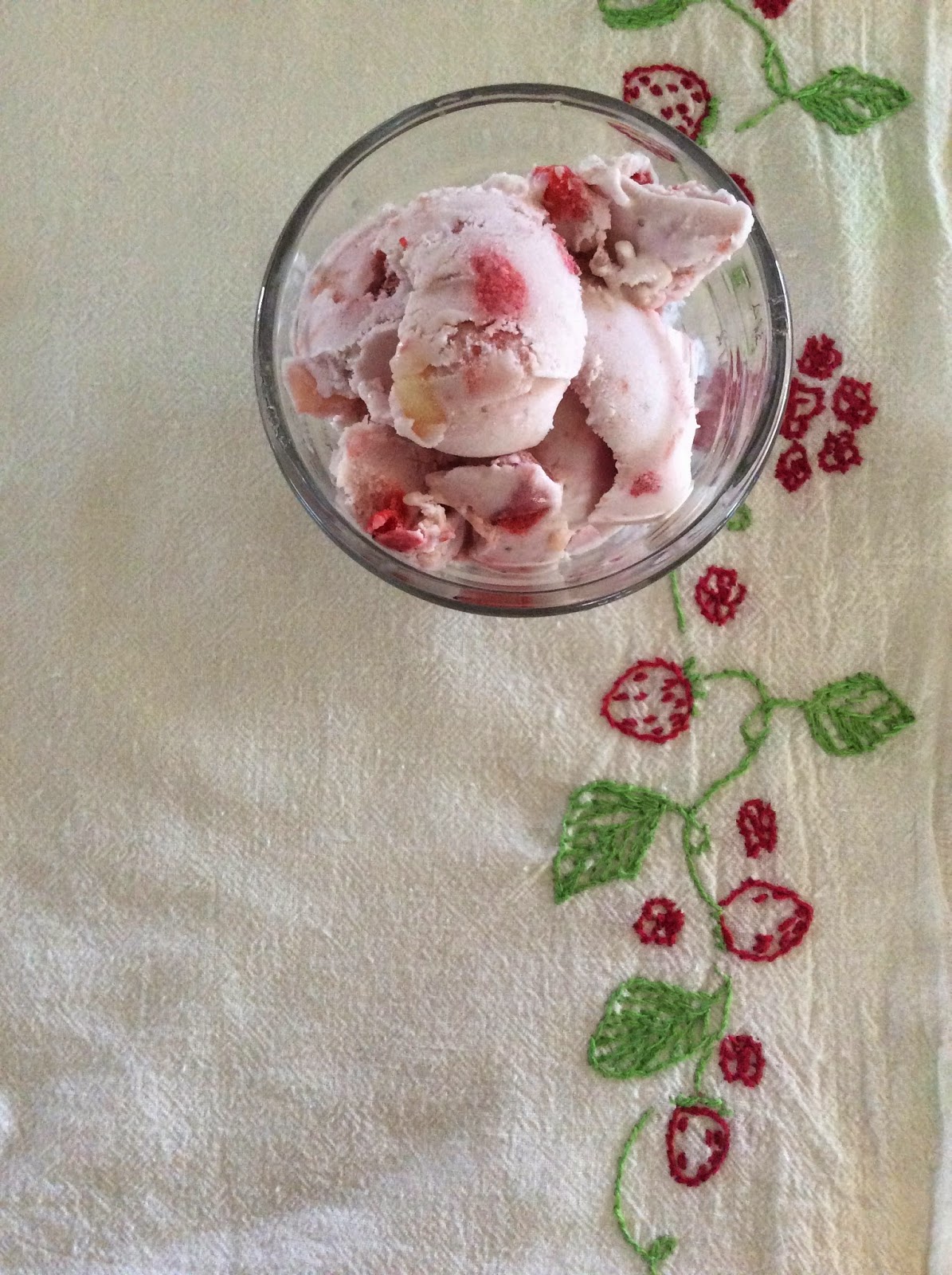 Now, the great thing about ice cream, other than the way it tastes, is that its the fat content that gives ice cream that smooth texture. Coconut milk, which has the creamy texture that I was looking for, is also high in good fats, too, so it's a perfectly good substitute, and because the fat doesn't need to be cooked in the same way that a custard-based (read: with eggs) ice cream does, making a dairy-free ice cream was quite a simple process that only required a few ingredients.
And then, of course, fruit, because I still wanted to feel virtuous even when indulging. 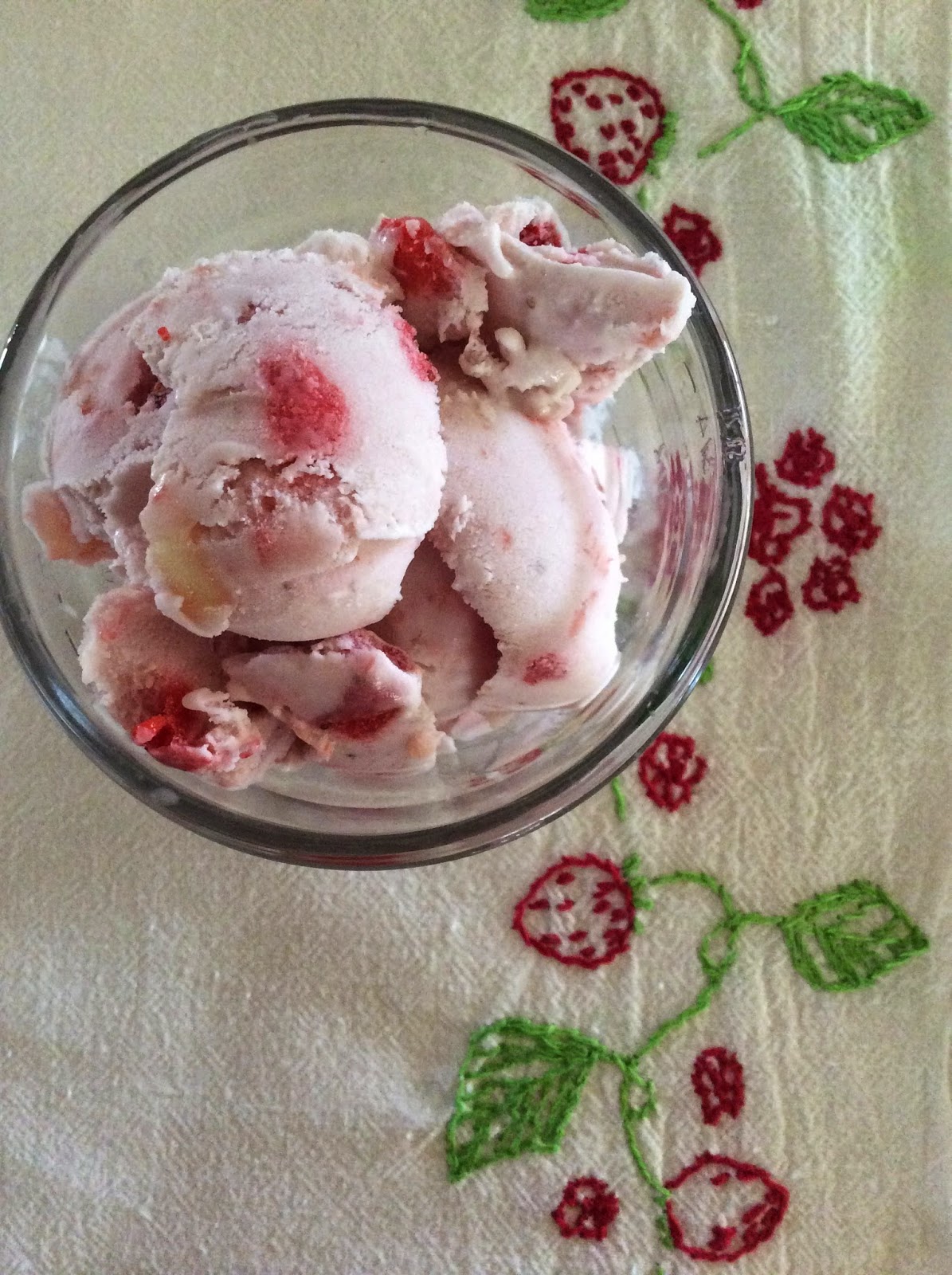 For the ice cream base:
For the mix-ins:
Combine coconut cream, coconut milk, agave, strawberries, and vanilla in blender, and puree until smooth. Pour through a fine mesh sieve (optional), and refrigerate overnight. I recommend using a quart jar in order to utilize vertical space.
Heat 1 tsp each coconut oil and agave a 6-inch sauté pan over medium heat; add strawberries and cook until caramelized. Cool to room temperature, and then refrigerate overnight. Repeat this for the pineapple (you could do them together, but I wanted to keep the color of the pineapple).
Churn the ice cream base according to your ice cream maker's directions. When the mixture is just about at soft serve consistency, add the strawberries and pineapple, and continue to churn until the fruit is well distributed.
Transfer mixture to a freezer-safe container; press plastic wrap down onto the surface of the ice cream, and cover with lid. Freeze for at least four hours before enjoying.

*NERD ALERT - A (not very) brief word about agave nectar: For a few years, agave nectar was seen as a "natural" alternative to sugar, being lower on the glycemic index, and as such, considered a better and even safer choice for diabetics and others who were concerned about sugar intake. However, for various scientific reasons that I won't go into here except to say that the large amount of fructose in it makes you want to eat more, even when full, agave nectar has been proven to not be a "healthier" option. I used it in this recipe because of its more neutral flavor (compared to honey or maple syrup). If the full amount suggested above (less than 7 Tbsp) is used, each serving of the finished ice cream will contain under 1 Tbsp of agave nectar, which in terms of sugar intake is slightly under the RDA for an adult (1 Tbsp has about 21 g of sugar; the RDA is 25 grams). 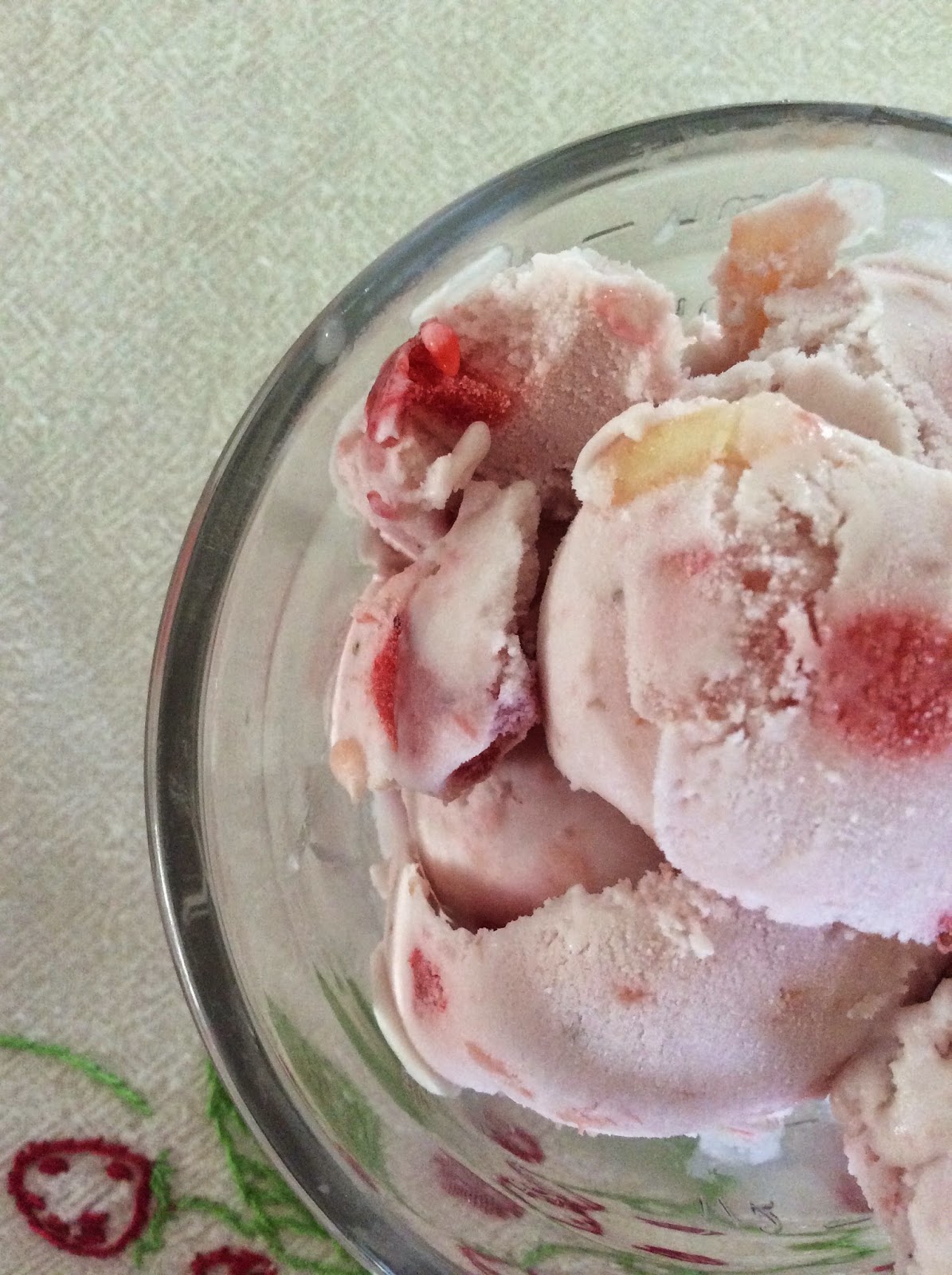 Today's post brings a close to a month of Ice Cream Tuesday posts for National Ice Cream Month. I hope you enjoyed reading the posts and recipes as much as I enjoyed eating them. In case you missed any, here they are:

And don't forget to check out some of the other wonderful bloggers who have participated in Ice Cream Tuesday this month; we've all had so much fun: