This is the third year that I've done the Run for Ryan House, up at DC Ranch in north (noooooooooorth) Scottsdale.  Like previous years, I ran with my friend Christie, whose daughter Sadie sometimes goes to Ryan House for respite care. It is also where my friend Alicia held her daughter for the last time, so while the race site is pretty far from home, it's always worth the drive to know that I'm helping support Ryan House, which is part of Hospice of the Valley (it offers both palliative and end of life care for children).
The race (a 5K, 10K, half marathon, and fun run) always the first weekend in March, this year the 1st of the month, usually prime running weather here in Arizona.
Not this year.
This year, March 1st was literally THE ONE rainy day we have had so far this year.
Coming from the Pacific Northwest, rain isn't quite the anomaly it is for native desert dwellers, but that doesn't mean I was pulling a Gene Kelly about running 6.2 miles in it.
I had thought about not going, really, when I saw just how rainy it was, since lots of rain means panic at the disco on the freeways here, but this was Christie's last race; she was recently diagnosed with arthritis in her knees, and her doctor put the kibosh on all running "forever." So I braved the panicked drivers and the slippery freeways (oil build up makes the freeways extra slick when it begins to rain here, but by the time I headed out, it was a downpour, so the oil was a non-issue) for a wet race.
I had to laugh at how the majority of the runners who actually turned out (it's the smallest turnout I've seen) were huddled under the awning where the check-in tables were, as if Elphaba's blood  were coursing through all of us; us, for I was also amongst the huddle, in a sad attempt to stay dry, like we were going to run the entire race under that awning.

Important Vanity Point 1: this was my first personalized bib. 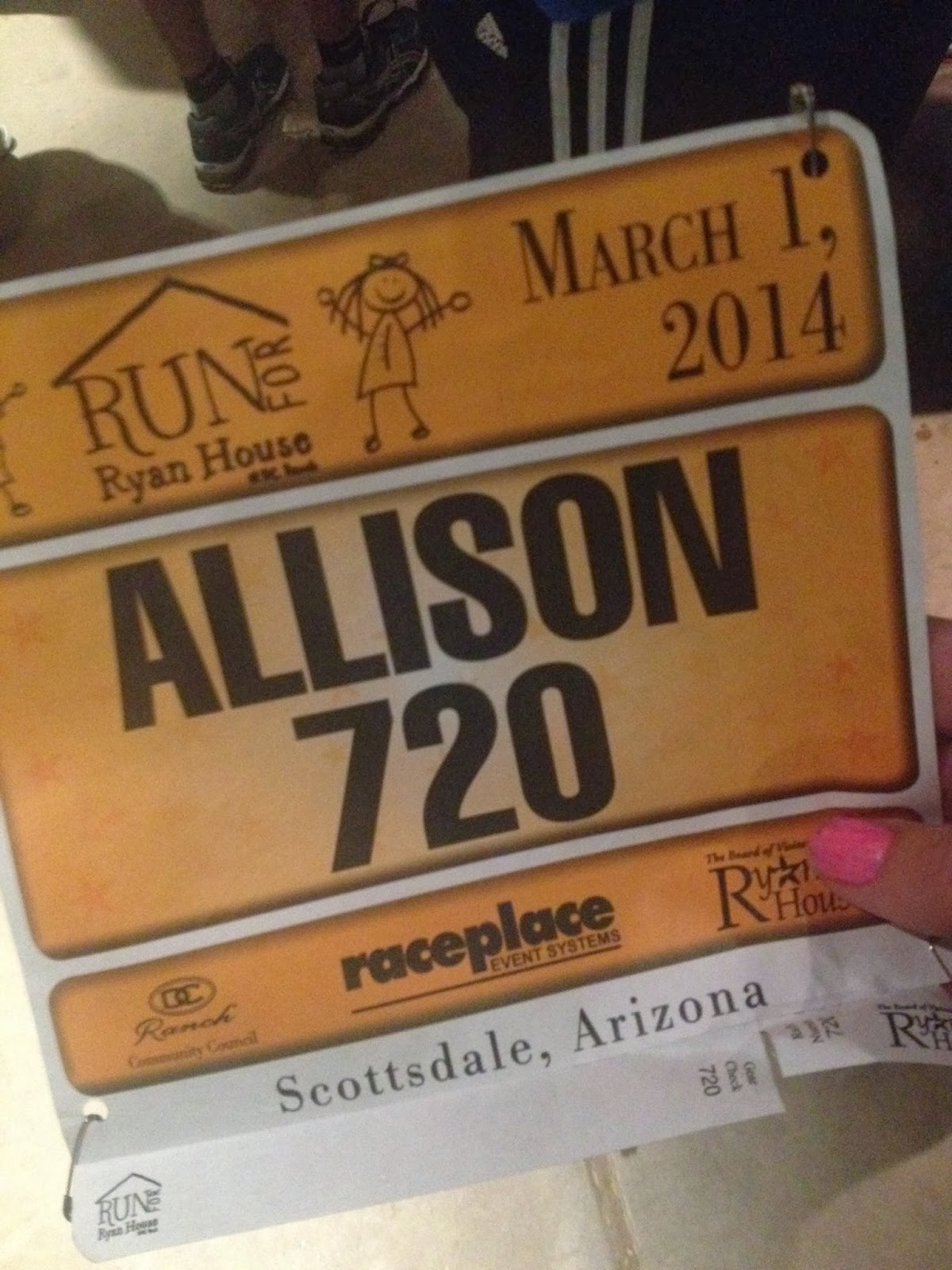 That my bib number was also divisible by three gave me an obscene amount of comfort. Don't ask; it's just a thing I have.

Thankfully, the rain let up a bit before the start of the 10K, so Christie's dad took the opportunity to snap a pic of us while we were still nice and dry. 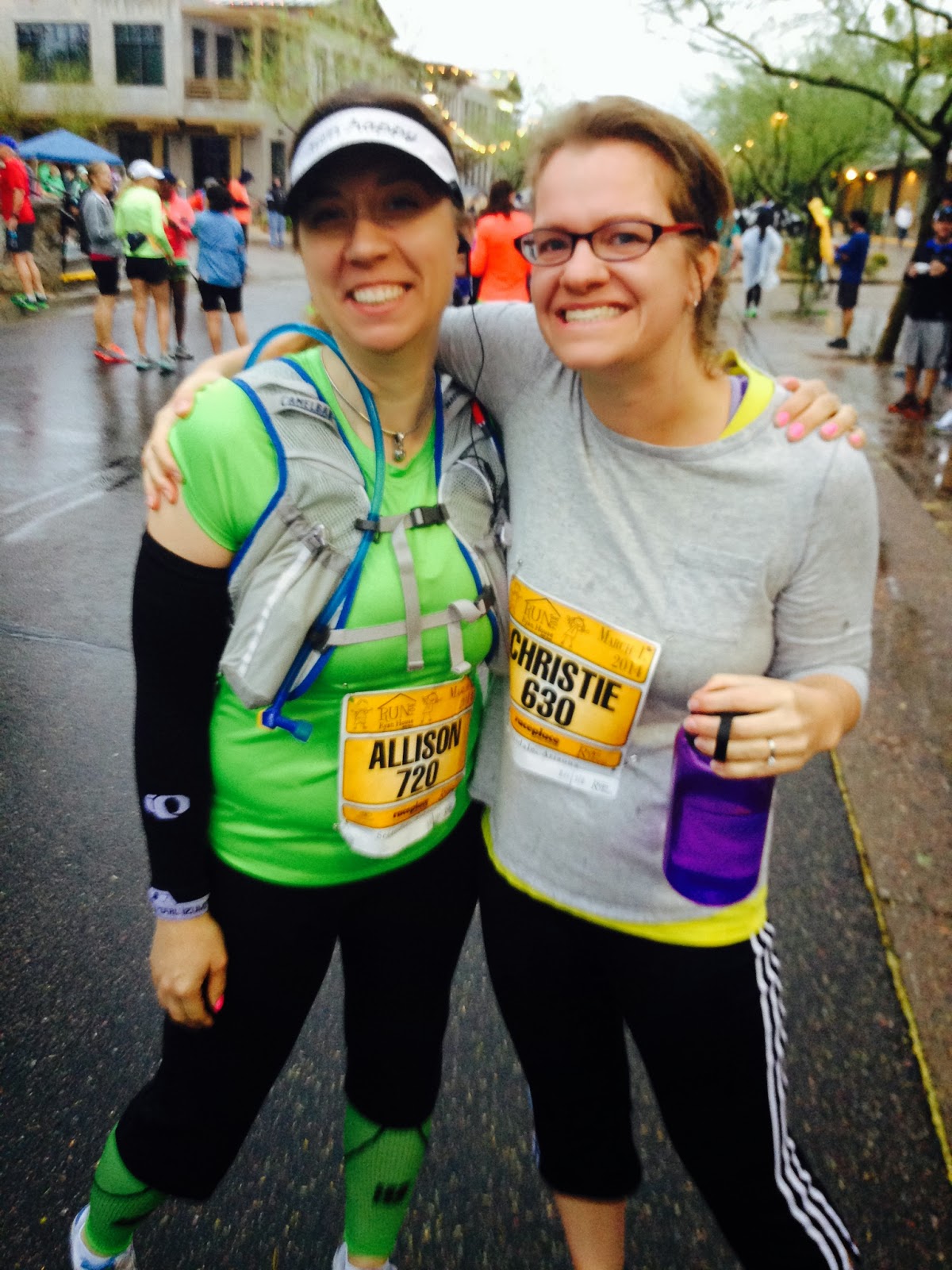 Yes, I matched. It just happened. And yes, that's Sheldon around my neck. I'll get to him in a minute.
Christie's bib number was also, divinely, divisible by three.

I was nervous about my shins, but they have been feeling all right, and I've been careful to avoid wearing flip flops in favor of more supportive shoes as much as possible, and I'm fanatical about foam rolling, stretching, and icing these days, so I knew I could survive the 2.33 mile-long hill (Christie clocked it).
But I'll be honest, despite my preparation and care with the shins, I was still nervous. And seeing as the word nervous is a synonym for fearful, I broke my long-standing "no jewelry when running except for your RoadID" and brought Sheldon along to keep me company.
I am the tortoise. Fear is the hare.

I don't know if it was really great chiropractic care along with the maintenance I did throughout January and February to get my shins back into shape or if it was the placebo of knowing my running spirit animal was with me every step of the way, but aside from a few (concerning) foot aches, I felt great.
I was slow conservative in my pace, but I felt great.
So great, in fact, that at the end, I turned to Christie and said, "I'm gonna sprint." And I did. Her knees didn't let her go with me, but she finished right after I did.

Important Vanity Point 2: my name - my full name, not just the name on my bib - was announced as I crossed the finish line.
Of course, this vanity point might have been more glorious had I been one of the faster runners, but it was still exhilarating to hear that as I ran through the chute.

The rain did its work in the first half of the race. By the time we hit mile four (not so important vanity point: this is the first race during which I had to pee so badly I used one of the race porta potties), we were drenched. I mean, it was nice that the rain let up, but the damage had been done, and I discovered after the race that wet arm warmers chafe in a perfect circle. The more you know, kids.

In our post-race snap, you can see the dramatic change in our shirt color from the one before we set out. 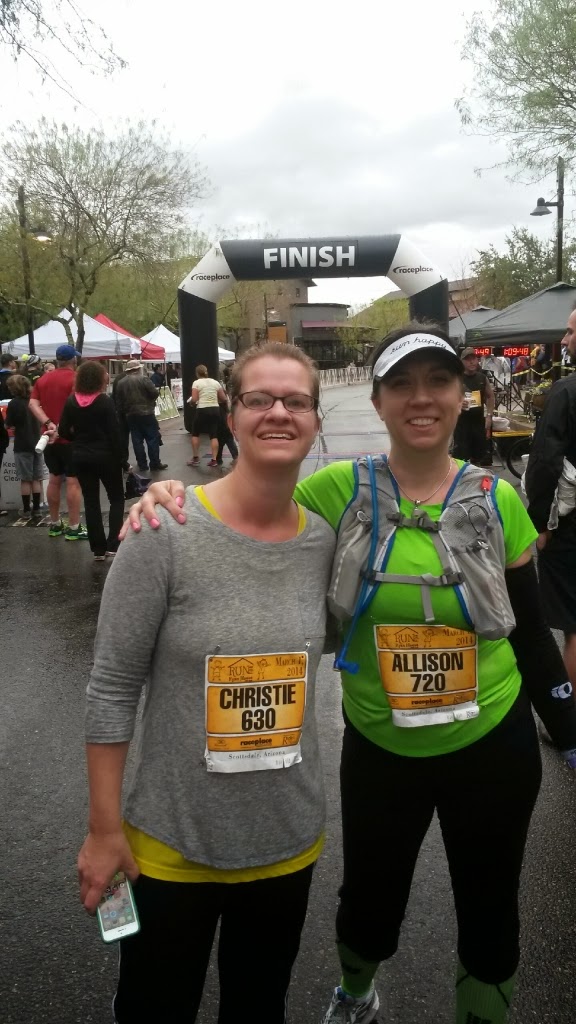 Our shirts were so wet that they were also clinging to us in the least flattering manner possible, so that's fun.
Even though it wasn't a cold day, once we stopped running, the chill of wet clothes got our teeth chattering, so we quickly snarfed down the bagels and peanut butter and bananas at the finish line and headed back to our cars. I stopped at the Starbucks that was between the finish line and the car to get one of those caramel flan latte things; I'm sure this was the hunger talking, but it was delicious, even if it tasted nothing like coffee.
A final first: I had brought an entire change of clothes, and once I was back in the car, I turned into a contortionist as I changed right there in the driver's seat, stripping all the way down to have a completely dry foundation. So if you were in the insurance office in whose parking lot I utilized, you're welcome for the free show.
Related: thank goodness for heated seats.

If I had known how few there were in our age group, I would have pushed myself a lot harder. Note to self - go balls to the wall during rainy races in Arizona!

I'm not sure what my relationship will be with the Run for Ryan House in the future. While I do love the race, not having Christie there with me will make it less desirable, and since this is also generally the date of the Phoenix marathon, I may want to set my sights on another half next spring instead (as long as my masters classes are chugging along well). We'll have to see when the time comes. In the meantime, I'm hell bent on getting through next January shin splint-free.
Posted by Allison