Even after the stir-fry this weekend, we still had not used all of the mizuna that was in our CSA.  We also got Easter egg radishes, and I have to confess that I cannot think of ANY way to use them that does not call for making them into little roses for people to look at as they eat the other veggies on the plate. 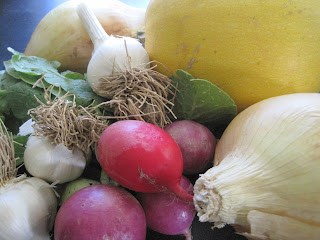 So I was pretty excited to come across a mizuna-soba salad recipe, as it called for not only the leafy mustard green but also some radish.
Now, if you have never eaten a radish, it's a difficult taste to describe.  Texture makes a huge difference here.  They are kind of spicy, but not like a chile spicy.  The texture, to me, is like biting into a very fresh  nashi - crispy yet airy flesh.  The heat is gone almost as quickly as you realize that there is a zing to the radish.  And I have to say, they are very enjoyable to slice when using a santoku (my favorite knife).
I had hoped to make it last night, but the chaos of getting everyone to bed and trying to get a three-mile run in made it a no-go.  I had, however, already made the dressing, so while the DH made a Costco run, I thought I could have that for dinner.
The first few bites were awesome - the earthiness of the mizuna mixed really well with the slightly spicy radish, the saltiness of the soy sauce, the sweetness of the carrot, the chewiness of the soba noodles, and that hint of sesame oil.
But that was it - just the first few bites.  After that, the flavors were almost too much together and at the same time not enough.  I found myself working really hard to eat another mouthful, even though I was really, really, REALLY hungry.
Of course, that may have been the problem.  I gave blood on Saturday, and since then I have wanted very hearty items and have had a yen for beef.  I've already had it twice this week (thank goodness I live in Arizona, with great machaca), but I guess that hasn't been enough for my depleted iron stores.
Yes, I know - being a dark, leafy green, the mizuna is chock-full of iron, as well as other amazing vitamins and minerals, all working together in ways I can't fathom.  But maybe it just wasn't hearty enough for me, as I dream of a gut bomb burger.
On a more positive note, the squash apple soup turned out well, if a little too sweet.  I enjoyed it with the last little bit of my pain complet, toasted and covered in cheese.  This month's Vegetarian Times has a squash-apple-leek recipe that calls for a little crème fraiche, which I think might balance out the sweetness a bit more.  I may have to try it, especially if we get more butternut squash. 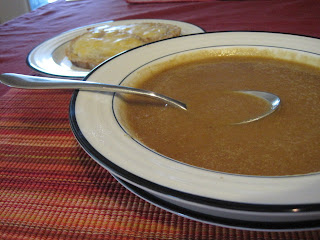