No Leftover Left Behind

I'm really trying not to have leftovers.  I am the only one in the house who likes them, but after a day or so, even I get sick of them.  I hate the notion of throwing something out.  ESPECIALLY when I have paid good money for it.
Thus, tonight we had "What the Heck Can I Put Together Fast and Still Make it Taste Kinda Good, and How Many Veggies Can I Possible Fit Into It?" Night.
First problem: the radishes.  What do I do with them?  They weren't very good in that salad last night, and I don't really want to go that whole "throw on top of something or next to something" route.
Hold on a sec - they are root vegetables.  I can roast them, can't I?
Yes, yes I can.
What else can I roast?
Potatoes!
Yum.  OK, what else?
There are onions and apple in the fridge (partly used and/or eaten on).
Done!
Toss with a little olive oil, kosher salt, and pepper - pop in the oven at 350 or so.  Great!  What's next. 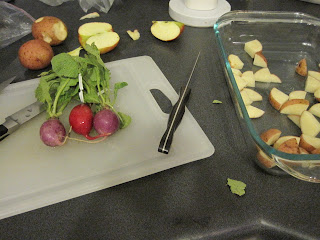 Ummmm....well, there are a few mushrooms left, and we really need to use up that bag of arugula.
Good idea!
(rustling around in the crisper)
Oh crud - these green black eyed peas are just about done.
OK, boil them, drain, and then saute in a little oil (OK, OK - I used bacon drippings this time, but I should have used olive oil again).
I'll start with a little more onion, some garlic.... those mushrooms... throw in the green black eyed peas.... turn off the heat... wilt the arugula... done!
The end result - not bad!  The hot salad needed a little kosher salt, but the onions actually fried up nice and crunchy, which was a very nice textural addition.
But what about the radishes?  They were very nice!  The spiciness that I mentioned in my last post was gone, replaced with an earthiness that exposed its root vegetable-ness once and for all. It was sweeter than a potato, but not as sweet as a carrot.  Mixed with the potatoes, apples, and onion, it was definitely a hash that I would do again.  Hopefully we'll get more radishes this weekend! 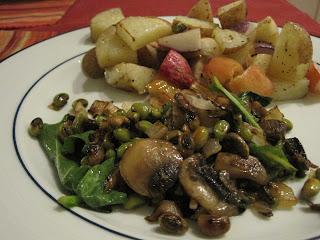