All righty - here we are in March, so it's time for me to look back on the year-long and monthly goals I set for myself.  To review, I wanted to achieve the following in the first two months of the year:
I am so-so with the vitamin.  I have placed the container on the counter, but I need to find a better spot, as it's not in a location where I look in the mornings (or really any time that I am eating).  Sometimes I wash it down with my morning coffee; other times I scrounge up an evening snack to get the deed done.  And then other days, like today, I totally space it and don't get that vitamin-y goodness. 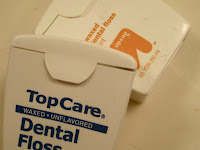 As far as flossing, I bombed that one.  Flat bombed it.  I admit that I DID floss shortly before beginning this post, as if to impress my readers with slightly bleeding gums.  But really, I've been lazy.  Not even forgetful, just lazy. Yes, I have forgotten from time to time, but there are also nights when I think to myself, you know, you really need to floss.  Then I respond, meh, whatev, and go to bed.
Thus, instead of creating two new goals for March and April, I am adjusting what I have been doing.  While there are things that I really want to do, like get more of that yoga I promised myself in (as well as other cross-training), I need to get these down before I branch out into other areas.
That means that my new goals are the same goals as my first posting, but clearly I need to make sure they are more attainable this time around.
For the vitamin, I need to place the container in a spot in the kitchen where I'll actually look.  And, even though it might seem rather silly, I think I'll set myself a daily reminder on my work calendar so that I can't ignore it (well, at least as easily as I'm doing now).  As far as flossing, I need to think about how to get this done.  Clearly telling myself to do it hasn't worked out all that well for me, but I also can't ask someone else to do it for me.  Not sure what will do the trick, but I'll work on it.
Hopefully my next recap will be more positive so that I can turn these goals into the habits I'd like them to be.  That way, my next goals might be a little more exciting.
Posted by Allison

Email ThisBlogThis!Share to TwitterShare to FacebookShare to Pinterest
Labels: Health, Various and Sundry