Sushi in the Sky With Diamonds

We have a kind of unspoken agreement in our house that even if we are dirt poor, we will go out at least two times a year - for our birthdays - and it shall be grand (the whole decadent philistines thing, doncha know?).

All I wanted this year was sushi.  I mean real, honest to goodness sushi, with raw fish that melts in your mouth.  As I had made this mandate a good while ago, Scott had been on a search for such a place, and he found it in Shimogamo in Chandler.
My birthday being on a Wednesday, we didn't bother to make reservations, and we were able to walk right in and sit at the bar.
Our chef Al introduced himself and explained the four specials of the night.  He was great - it was clear that he loves what he does, and he had a great rapport with the group of three sitting a bit farther down the bar, clearly some of the many regulars who were there that evening.  He was willing to not just give us the rundown of what was in the various rolls but also to educate us about the different fish that they had, where the fish was from, and more.  It was a meal, a show, and a lesson all in one! 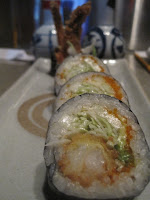