Getting My Panties in a Bunch

It was just over a year ago that I began running, at the urging of my friend Veronica.  She has been running for some time, so when she learned that I had signed up for a 5K that I fully intended to walk, she made it some sort of personal mission to beat that idea out of me. 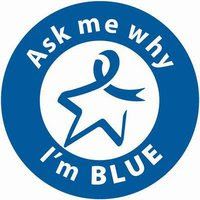 The 5K in question was the Colon Cancer Alliance's annual Undy 5000 5K Run, a fundraiser that helps raise money to find a cure for colorectal cancer, the cancer that took my dad from me in October 1999, when he was 15 days shy of his 52nd birthday (and I was a few months shy of graduating from ASU).
Twelve years later, I still have those "moments" when I get absolutely lost in the tears and grief.  Recently, my cousin sent me a gigantic box that she put together while cleaning out her mom's (my dad's sister) house after she passed as well.  There were photos from when my dad was a baby all the way up to his obituary.  There were even his military records of promotion and letters he had written to various relatives.  I spent a week crying over that box, thinking about all the baby pictures of my own daughter that my dad will never see.
But the important thing is that I do something to direct that grief or else I might still be curled in a ball, crying myself to sleep the same way that I did the day I got off the plane in Seattle to find out that I was too late to tell my dad goodbye.

Enter the Undy 5000.  This "brief" (hardy har har!) walk/run to fight colon cancer was just the thing that I needed, and last year I signed up for it, thinking that I'd bring HRH in the stroller and walk the 3.1 miles in support of those who are fighting this insidious disease.
That's where Veronica came in.  I told her about it, kind of hoping she'd make a donation, and she told me that I could easily run it (she made a donation, too, so I am doubly grateful to have a friend like her).  Doubtful, I joined her on an evening run, and somehow I managed to run 3.2 miles without keeling over or otherwise requiring her to rush me to Chandler Regional Hospital.  Inspired, I started running more and more, determined to actually run in the Undy 5000, my first "race" since track season ended my senior year of high school.
And I did.  I never looked back.

I can't save my dad's life; that hope escaped me twelve years ago.  But I can do my utmost to work to continue to raise awareness of (while everyone wants to be aware of breasts, it seems that there are still some who cringe at the talk of anything with the word "rectal" in it, including cancer) and fight against colon cancer today.
One of the best ways, outside of improving one's eating and exercise habits, to combat colon cancer is regular screenings.  For years, the Centers for Disease Control and Prevention has encouraged people to begin getting screened at the age of 50 except for certain situations, including for people with family history of the disease, in which case people are urged to begin screenings ten years before the age at which their relative was diagnosed (my first screening will be when I am 37, so you know that birthday party will be a blast... if you're lucky, I'll post pictures).
But recently, an Austrian study suggested that men especially may benefit from beginning their screenings at age 45 (the full study has been published in the Journal of the American Medical Association).  I loved this news; my dad was diagnosed at the age of 47; clearly, waiting until 50 did nothing for him.  I have to ask myself (even though I hate to do it) - could a screening at 45 have saved my dad (if we could have gotten him to go to the doctor for a screening in the first place...more on that in a minute)?
Several American experts disagree, arguing that the original study had fewer men under 50 than over it, most of whom were already at a higher risk for colon cancer.
When I read those responses, that was the point at which my head almost exploded.
Let me get this straight: a study that suggested that men may be better off by having screenings 5 years earlier than the currently recommended age (in the US - other countries may and do differ) causes some doctors concerns about changing that recommended screening age because those people who were in the study were at higher risk to get colon cancer and, for the most part, actually DID get colon cancer?
OK, yes, I only have degrees in English and German from Arizona State University, a renowned party school.  I certainly didn't get a medical degree from Harvard, Cambridge, Yale, or other university that graduates brilliant medical personnel.  I am just the daughter of someone who was diagnosed with colon cancer three years before the recommended screening age, and so maybe my reaction is a teeny, tiny bit biased towards being as aggressive toward prevention and early detection as possible.  I wonder if the parents of Dylan Rebeor, a 16-year-old high school football player from Tennessee who died last year from colon cancer,  would be biased.  I wonder if Billy Burkhart, who was 38 when he was diagnosed, and his family would be biased.
In 1995, when my dad was diagnosed, he was anything but the epitome of good health.  He had smoked since the late 1960s when he entered the US Army, considered a "big salad" at lunch to be the lettuce and tomato that accompanied his bacon cheeseburger, and never, EVER went to the doctor.  One of the reasons his cancer wasn't caught quickly was because of his phobia of doctors, so it took a great deal of pleading, cajoling and (probably) nagging from my mother to get him to go in the the first place.  So I'm not going to say, definitively, that an earlier screening would have saved my dad's life.  I can't know that.  But with greater awareness that has come about in the 16 years since that time, I would like to think that it could.  My dad did know he had a great risk of cancer - his mother had battled both breast and ovarian cancer, and his side of the family runs the gamut for various mid-section cancers.  I just wish he had also known more about screenings, since the "prevention" part didn't happen.
That's actually one of the reasons that I started this blog in the first place; I wanted to improve my diet and my family's diet so that I can combat colon cancer in that manner.  Along the way it's evolved from a "what's this family eating today?" blog to something greater, and I hope that part of that "greater" is a better awareness of one's need to get screened (in the words of one team that ran in the Phoenix Undy 5000 last year, "save your guts; scope your butts") and to take preventative measures.
In this past year, I have read about people under the age of 50 being diagnosed with colon cancer more and more.  And yes, I understand that it's more rare, but it's happening, and it's happening a lot more than it used to.  Is it because we are discovering it, or are rates up?  Who knows?  Who cares - why aren't we (I'm using "we" pretty loosely here) taking more direct preventative measures like, oh, lowering the recommended screening age?  That might be a good idea.  I mean, you'd think it might be a good idea.  But I'm not a doctor.  I'm just that girl who lost her dad to colon cancer when he was 51.

This year, then, I'm running in my second Undy 5000 with a greater purpose than last year.  All the money that I help raise will go toward funding better education about this disease, and maybe that will help those skeptics see that earlier screening isn't a waste of time, energy, and resources because as I see it, if someone's life is saved by a screening, all of that time, energy, and yes - money, too - is well spent.
Of course I would be remiss if I didn't post the link to my own Undy 5000 page.  I'd be ever so grateful if you'd visit it.  Colon cancer is the third most commonly diagnosed cancer, and it is estimated that this year, approximately 1/3 of the people  who are diagnosed with it will die.  Better and earlier screening means that fewer of those diagnosed will die from colon cancer.  I hope and pray that some day, people will be shocked and appalled that someone like my dad died from colon cancer, but for now, I hope and pray that my daughter never has to sit on her couch and write a story like mine.