I'm writing this post on what would have been my father's 64th birthday (October 16), but I'm pretty sure that I'm not going to make it through without sobbing uncontrollably, so it's likely that by the time I finally hit "Publish Post," the new work week will have dawned. 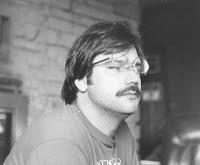 My dad is a complete stranger to all but a handful of those who follow or happen upon this blog, a picture of a past life who doesn't necessarily have any real significance.  And while I'm sure I could regale you with stories of his antics (like the time he put plastic dog poop on my pillow and then put the cat right next to it... and my subsequent reaction), he's still an anonymous someone who happened to have colon cancer.
A great many people have had colon cancer, many of them in relative anonymity to the greater public.
But many famous people, names you may know and even adore, have also battled colon cancer, although some fought their battle with less fanfare and publicity than even my dad.  Some of this was their desire for privacy, but some, sadly, because of the lack of awareness at the time of their diagnosis and the taboo nature of talking publicly about "that" part of one's body.
Perhaps you've heard of these individuals.  They each shaped the world in their own way, some larger than others.  But they each fought colon cancer.

Of course, there are many more, and sadly, I know that others will someday be added to this list.
The biggest name, though, in my mind, at least, was Peanuts cartoonist Charles Schulz, whose last cartoon ran the day after his death in February 2000 (only a few months after my own father passed away).  Like countless others, I grew up reading Peanuts in the local newspaper each week, and (perhaps not like countless others) always hoped that Snoopy would someday finish his great gothic novel (yep, English dork even at a young age).
I don't know anyone who didn't love Charlie Brown and Snoopy.  Even when the cards were stacked against him and that football pulled out from under him, he just kept going.  I'd love to think that Zooey is as smart as Snoopy, although the closest I think she'll get is her foiled attempt this morning to get two of HRH's hair ties off of a pencil, where I put them for safe keeping in order that Zooey didn't get to them and eat them (she has a problem; I'm planning an intervention).
The death of Charles Schulz hit me like that proverbial ton of bricks, which might strike you as odd, considering I might not be able to pick him out of a lineup.  But the death of a true celebrity on the heels of my own father's death was a small start on my road to working through the grief.  My dad wasn't the only person to get colon cancer, and he wasn't the only person to die from it.  People who have all the money in the world, like the late Steve Jobs, can't stop cancer if it really wants to raze a soul.
I started this blog to track what I hoped would become better food consumption (damn you, Dr. Pepper, and your siren song that keeps bringing me back), but in working to become a healthier eater, I cannot ignore the emotional health that must come along with eating better and taking better care of my body.  I try to be funny, witty, at some times even irreverent, but I can't make this post as "hilar" as I'd like (although please ask about that plastic dog poop story; I'll tell you about it sometime).  I have realized that I can do things to help reduce the suffering of others, whether that is donating $5 to a great cause (you can read about some of my favorites), running in a 5K, 10K, or half marathon to raise awareness/money for one of those causes, or taking over a class so that a colleague can attend to a sick child, or... or.... or...
Through November 19, I'll be posting about colon cancer, my participation in the Undy 5000, and my dad a little more than one might normally do on a "not totally personal" personal blog.  Hopefully by my doing so, someone else can just focus on that funny, "the one time my dad put plastic dog poop on my pillow" post.