Broc-N-Cheese (A.K.A. the Post that Goes Against Every Fiber of My Being) 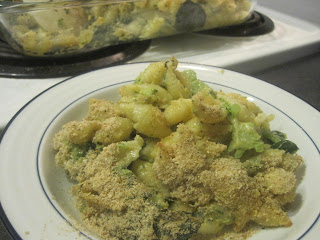 After another week of feeling completely crummy, hacking up what I am convinced it 5/8 of a lung, and starting yet another round of antibiotics for yet another upper respirator/sinus/ear infection (jealous yet?), I'm back on the blog.
Being sick makes me hungry.  Not that, you know, I generally shy away from food, but when I'm sick, I want just about everything that you can think of, including every food product presented to me during commercials (even if I am loathe to admit what those commercials were).  Of course, I go through my "I want matzo ball soup" phase (generally I whine to The Husband, and he goes to get me some - ahhhhhh), and I have of late gone through a few "Hmmmm, pho sounds really tasty, too" phases.  That's natural - soup is practically the perfect food for sick days, whether it's chicken noodle or miso.
But what might not be "normal" is my insane need for macaroni and cheese.  That's right - dairy (butter), dairy (milk), and more dairy (cheese) is soooooooooooo perfect for those with stuffy noses.
I try to stay away.
OK, I really don't.  The Husband tells me to stay away from it, but I have to have my half-and-half in my coffee, and when a girl wants herself some mac-and-cheese, there's not much that can be done except to get said girl her mac-and cheese.
Thankfully, my tenure as a Catholic school teacher left residual guilt on me, and I felt extremely really sort of bad about making myself my favorite casserole dish while The Husband was out watching the Patriots prove that Jesus really isn't a Broncos fan.
So I took a page out of my most recent issue of Vegetarian Times and made a big, fat dish of Broc-N-Cheese. 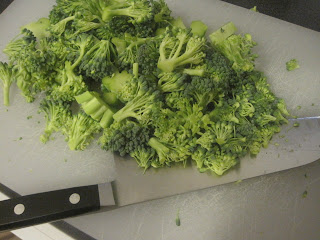 But still with noodles.  A sick girl needs her carbs and comfort.
The ratio was intended to be 50-50 between the noodles and greenery, but once I combined the two, I realized that I had WAY more shells than broccoli (we have some hand-eye coordination and spatial awareness issues, so I guess it's good that the whole architecture major thing didn't work out), so I chopped up the kale that accompanied the broccoli in our CSA share, and I mixed everything with the cheese sauce. 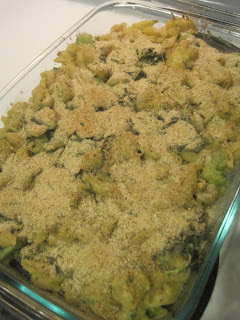 Since I was feeling obliged to be healthy, I did use breadcrumbs instead of my usual potato chips on top of the dish before popping the whole thing in the oven.
I have to say that I am very glad that I added parmesan to the cheese sauce instead of keeping with my usual cheddar.  It added a bit of that umami depth that helped balance the slight bitterness that was left in the kale.  Additionally, unlike my original recipe, I used mustard powder and garlic powder.  The garlic was a nice addition this time, although I have to say that I did remember why I like to use chips instead of bread crumbs in the first place - the breadcrumbs really don't have the crunch that I have come to associate with mac-and-cheese.  I'm sure that if I had been able to find the panko crumbs I am positive are somewhere in our pantry, I might have been happier about the end result, but I have no idea where they went, so I had to slum it with "regular" breadcrumbs.  Le sigh....
But the best thing about making mac-and-cheese, or this (sort of?) healthier version in Broc-N-Cheese, is that there are leftovers, and this is a dish that is ALWAYS better as leftovers.

Do you have a favorite "sick" food or comfort food?  Do you ever "justify" your splurge by pretending that the broccoli you added balances out any extra butter that may have "accidentally" been tossed in the pan?
Posted by Allison