Random Thoughts on Thursday - In Case of Emergency, Get Comfortable

Actually, I was thinking about this yesterday, but I elected to quietly "go dark" for the day to, in my own small way, challenge the proposed SOPA/PIPA bills in Congress.  I truly believe that piracy needs to be battled, but I also don't feel that the sweeping measures these bills take are the appropriate route.  Considering that I work online, I wasn't completely able to stay off the computer yesterday, but I only used our internal system and email.  Thankfully, I have Bejeweled on my iPhone, so last night I played a bit of that to unwind.  New. High. Score.
But let's get back to something far less imperative: sweatshirts.
Take a quick look at this (poorly lit because of poor timing, but whatever) picture: 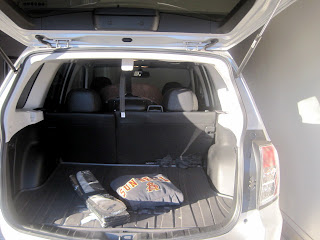 This is the back of Ursula, our new(ish) Subaru Forester.
Do you see that ASU sweatshirt?
That sweatshirt is part of my In Case of Emergency Kit that is always in my car.  Currently, that In Case of Emergency Kit contains my sweatshirt and two reusable shopping bags, but I've got A Plan to make it actually legit.
But let's discuss the sweatshirt for a moment.  This particular beauty was given to me by The Husband, and I was able to wear it through my entire pregnancy (I'm not the only one who has spatial awareness issues in this house, clearly), and I love it.  Until the ill-fated ASU-UofA game this year, the occasion of which netted me a new black sweatshirt, it was my favorite.
Now, this particular sweatshirt's location is the cause of a bit of controversy (please read that like I'm a reporter on the BBC) in our house.  Before Ursula joined the family, it resided in the trunk of Agnes, our Buick Lacrosse (that was totally not my decision; The Husband clearly thinks we are 75 and wear black socks with brown sandals).  Usually.
From time to time, I would feel the need to put on a sweatshirt while not at home, and I would head to the trunk.
Just to find that the sweatshirt had disappeared!
Where was it?  Well, The Husband saw fit to clean out the trunk (someone, totally not me at all, stored Dr. Pepper bottles back there), and each time he felt the need to do so, the sweatshirt came back into the house.
The first time it happened, I was pretty confused, but any subsequent times, I was aghast.
You see, growing up in the Pacific Northwest, a sweatshirt in the car was basically part of state law (I'm still trying to find the exact statute).  The weather can change on a dime in western Washington, and you can have a perfectly lovely day turn chilly in a heartbeat.  Hence then need to have a modest wardrobe change in the trunk.  Some of us have just the sweatshirt or a sweater.  Others have a change of shoes, socks, etc., to make sure that the possible sudden downpours don't leave us soaking.  It's really a matter of choice if you want to go that far.
The Husband, having grown up in Arizona, has no familiarity with Washington state vehicular laws and practices, so having a sweatshirt in the car was, to him, kind of silly.  After all, we live in a state where seeing a person wearing oven mitts to drive during the summer months is not weird but in fact one of the best ideas ever.  The sudden necessity of a sweatshirt rarely comes into play.
But you can't really unlearn 18 years' worth of indoctrination in Sweatshirt Philosophy, even after years of living in the Valley of the Sun, and the sweatshirt remains a Vital Component of any car ride.
I'll be honest - I love sweatshirt weather.  January is probably the coldest month we have here in Arizona (relatively speaking, of course; I don't want my friends in Michigan and Minnesota thinking I've come so far as to believe that a low of 34° a few nights a year constitutes true cold), and I love that I can spend a few weeks in jeans, oatmeal socks (the kind that you make sock monkeys out of), and an oversized sweatshirt (maybe not full term pregnancy oversized, but you have to do what works for you).
Hey - how about that?  That's exactly what I'm wearing this morning as I drink my coffee and watch The Today Show.  Ahhhhh.... 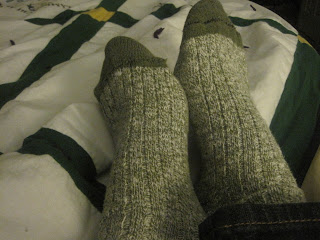 What is your favorite thing to wear on a "cozy" day?  What items do you "need" to keep in your car, In Case of Emergency?  Do you wear oatmeal socks, too?
Posted by Allison

Email ThisBlogThis!Share to TwitterShare to FacebookShare to Pinterest
Labels: Various and Sundry