Give Me a Break!

Eight years ago today, on April 22, 2004, Pat Tillman was killed by friendly fire in Afghanistan.  The loss of an American patriot, a man who gave up his NFL contract (and all the money that came with it) to serve his country, was felt keenly here in Arizona, especially in Tempe, where Pat had played football as a Sun Devil.
While the military coverup of the incident still stings many, it is remarkable to see, each April, thousands of people come together to honor Pat's legacy and love for his country.  Yesterday was the eighth annual Pat's Run, a 4.2-mile race that finishes on the 42-yard line at Sun Devil Stadium (Pat wore #42 while at ASU; he wore #40 when he became an Arizona Cardinal), and The Husband and I both were among the 28,000 participants at the event (there were also numerous shadow runs throughout the country - and globe - which brought the number of participants up to an even greater number).
All in all, it was, like my first experience with the race last year, an absolutely incredible tribute.  After a tear-inducing Star Spangled Banner, performed by Dr. Jessie McGuire, Kurt Warner, a former Cardinal himself, was introduced as the official starter; while he spoke only briefly, his words for a man he never actually met were touching.
And then - we were off.
But not really.
An event of this caliber requires organization, to say the least, and I am here to tell you that Pat's Run is extremely well organized.  In order to manage the thousands of runners and walkers, participants are placed into corrals of 1,000 people each.  We were placed in corral 8. 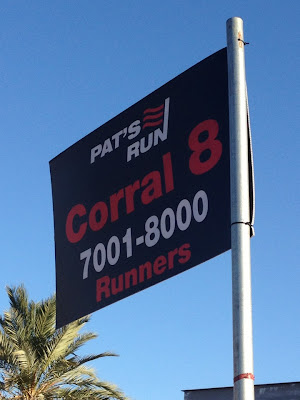 Once corral 1 was underway, there was a 30-second gap before corral 2 was let go, with its own starting horn (the clock didn't start over; the chip times were, of course, what marked official times).  The race volunteers, many of them ASU ROTC members, kept us non-corral-1 runners at bay until it was our turn.
And then, for real this time, we were off.

I have been training on hills for the last month or so to make sure that I was ready for both the progressive hill that was about 1.5 miles in as well as for the climb up into the stadium right at the end.  My training schedule has, naturally, tapered since preparing for my half marathon, but I've still been averaging between 10 and 15 miles each week - far more than the 4.2 miles of yesterday's race.
But I clearly took it too seriously, even though I tell most people that "this isn't one of those races that you want to try to PR - it's an event to enjoy being a part of."
Of course I can't take my own advice.
So last night, I got my clothes ready, pinned my bib to my race shirt, set my iPhone's playlist, filled my water bottles, and set out everything that I would need for the day before showering and going to bed.
Where I lay, awake, unable to turn off my mind for most of the night.
I'm not sure how much - or how little - sleep I got, but I can tell you that it would be a night during which Zooey woke me for a potty emergency, so that didn't help.
By the time the alarm went off, I had already been up - again - for at least 20 minutes.
I could barely choke down my breakfast, nauseous in a way that I hadn't been for my half marathon.  As the minutes ticked by, and we were still home after the point at which I wanted to leave, I could feel the stress more and more - I was NOT going to be late.
One of the great things about Pat's Run is the ability to take the Light Rail in - it's much easier to hit the park and ride and head on in (note to everyone who tried to park AT the stadium...).  But as we waited to get tickets, waited for the train to leave, waited to get there, I noticed that my resting - RESTING heart rate was creeping up and up (yes, because I wore my heart rate monitor, too; I didn't mention that yet?), and it was way higher than usual - 125 bpm.  And I was still feeling like I was going to have a reversal of fortune with my bagel.  But I was NOT going to be late.
We weren't late, and we set off with the rest of corral 8, just like we were supposed to.
Since I had been working on hills and making sure that I got three runs in each week, I started off feeling confident; the progressive hill at Curry was much less daunting than last year, and I passed the water stations in favor of my hydration belt, which I was using to wet my whistle as well as my head and neck - it reached 101° yesterday.
But as I progressed through mile 3, that nausea that was prevalent when I was attempting to choke down my bagel and peanut butter refused to go away.  It stayed with a vengeance, as if to say "You ignored me once; you won't ignore me again."  I swigged a bit of water, and then a bit more, and then a bit more.  No dice.  I was about ready to feed the fish in Tempe Town Lake.
I had to walk for about 50 meters in order for my stomach to settle enough for me to have a chance at finishing.  Why couldn't the last water station have ginger ale, too?
I managed to finish sprinting down the side of the lanes, high-fiving as many of the football team as I could, and almost mowing down the dude who didn't seem to understand what "COMING UP ON YOUR LEFT!!!!!" means.  Like many finishers, my hands were raised as I crossed the finish line, my fingers making the sign of the pitchfork.
Pat's Run is an emotional finish; we finish on the 42-yard line, facing the Tillman tunnel.  The scoreboard is set to 42:42 with a tied score of 42.

Most finishers stay in the stadium and are constantly cheering those who finish behind them.  As a Sun Devil myself, being able to run onto the field is exciting in itself.
After some honey, an orange, and some water, I started feeling like myself again, although the desire to hurl was still prevalent as I found The Husband (who had the nerve to finish BEFORE ME) and sat in the shade while looking/waiting for some of our friends who were also running and walking.  In the meantime, we had excellent seats to see Marie Tillman, Pat's widow, interviewed by the local NBC affiliate after receiving a huge cheer from the crowd.

As we left the stadium, we also saw this couple get engaged:

Again, the crowd erupted into cheers, and I confess that I started to cry a little at the beautiful moment that was both so intensely intimate and more public than most people might imagine a proposal.  I wish these two people, whom I will probably never meet, a lifetime of love and joy.
While sitting at the second of two Irish pubs we visited post-run day (because I needed to somehow feel more terrible than I already did), we discovered that our times were already published, and all 8 of us snatched up our smart phones and headed over to the site.

That I didn't lose my breakfast and my beer at that point is, I think, quite remarkable and worth noting.

To tell you that I was disappointed trivializes how upset I was.  If I hadn't been in a public locale among friends, I probably would have started ugly crying.  My goal had been to beat last year's time by about two minutes - I was hoping to finish in about 35 minutes, so the extra time that I managed to tack on, even though I ran more than I did last year, was a huge blow to me.  That The Husband, who barely trained, finished in 34:08, rubbed that much more salt in the wound that was just ripped open.
So yes, I clearly DID take the race far too seriously, and I over-thought it, stressing out and wasting valuable energy on worrying and not sleeping, resulting in dry heaves, nearly losing my breakfast, and finishing slower than my initial year.
Even typing that now makes me want to cry a little.  Or a lot.

So, this week, I'm taking a break from running.  I need to take a step back and rethink my running strategies and remember why I love running in the first place.  There are plenty of races to think about and plan for and set goals for, and I made the huge mistake of obsessing over an event that truly is greater than the sum of its participants and one that is an absolute honor to be a part of.  That made me enjoy it far less than I should have, and that's the sad thing about it.
My goals for this week, then, are simple:
Once I can do that, I can lace up my shoes again.

Have you ever had an "off day" or burned out at the worst time possible?  What did you do to regroup?  Have you ever participated in an event with thousands upon thousands of others?  Whom would you run to honor?

In spite of my lack of proper focus on the day, I do want to thank the Pat Tillman Foundation, Marie Tillman, and all the Pat's Run volunteers for staging, once again, a remarkable event - and one that was amazingly organized for the number of participants flooding the streets of Tempe.  It was truly an honor to participate, regardless of my time, in this event that does so much for the Tillman Military Scholars so that they may create a legacy as great as the one that Pat left.  The sacrifice Pat made is staggeringly humbling, and it is a touching reminder that there is always something greater than ourselves to which we can give.