I have finally accepted that the way the Hundred Pushups Challenge was designed is not for me.

My body doesn't jump from doing 72 to 80 pushups in two days.
And I'm OK with that.
I haven't thrown out the app or gotten rid of the pushups in my weekly routine.  In fact, I really like including them, I really really like how my arms are looking, and I really really REALLY like the fact that the program only expects users to use it three days a week.
So, I've been using the reset option to repeat days.
Like adding reps or weight to other cross training practices, it can take me a week or more to move from one Day to the next.  I try to maintain a balance of pushing myself along in the program with being careful not to overdo it.  I tend to spend 3-4 days per Day before moving to the next, using the final, max-out set as a guide.  Once I can max out at 2-4 pushups more than the minimum with only little exhaustion, I know it's time to move on.
Yet still I have no cheesy body-builder, flexing pose to offer you.

I can feel your disappointment from here.
To help you process your feelings, I have a snap of how many pushups I have done since I started the challenge.  I hope it's as soothing as it's intended to be. 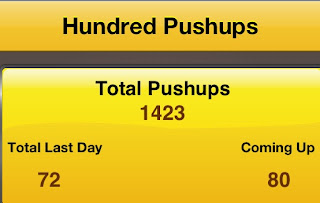 But while I continue to incorporate my thrice-weekly pushups,  have taken another element out.
I have been intrigued with the #plakaday movement on Twitter for a while and finally decided to add it.  The concept, if you're not familiar, is to complete a plank for as long as you can, with the objective of being able to hold it longer and longer each time.
It's not that I didn't enjoy doing the daily planks.  In fact, I was able to feel a difference in my abs relatively quickly.
But unfortunately, I made the decision to participate in the hashtagging on Twitter, and that's where things went awry.
You see, someone calling himself (or herself) The Plank Police has taken it upon himself (or herself) to call people out when they miss a few days of hashtagging their planking progress on Twitter.
Thus far, I've been asked if I'm "hard core or hard snore" and if I'm "shooting planks or shooting blanks."
So basically, instead of saying, "Hi, I notice you haven't been hashtagging your plank progress every single day.  I'm sure you're busy with other things that are far more important in your life than a one-minute plank and which I have no business asking about, but I just wanted to make sure you're OK" (in 140 characters or less, of course), this person has determined that it's his (or her) job to call people out for not doing something that they aren't required to do in the first place.
Um, really?
So, two weeks was enough for me.  I called it quits on the #plankaday and its skewed definition of "support," although I am still using planks in my ab workouts throughout the week.
Call me spoiled.  The online running community is so amazingly supportive, whether I run 1 mile or 20, that I probably assumed (yes, shame on me!) that other online communities would be similar.
I'm certainly not going to apologize to this faceless Plank Police for not posting about a day or two (or seven, if that's the way it is) of my planks, but I can make the choice to discontinue an activity that is less than uplifting and helpful, which is exactly what I have done.
Thanks, but no thanks, #plankaday.  You can have your snark and pretend support.  For me, I'll stick with my #runchat, #runnerd, #runhers, and #RunningPackintheSky hashtags.  I support them, and they actually support me.  With, you know, kind words and encouragement instead of nagging.

What hashtags on Twitter do you follow?
What is a great source of support for you in your healthy efforts?

Afternoon Update:
Thanks to the retweets of a few of my Twitter running buddies, @PlankPolice (who is apparently NOT a bot) responded:

Thanks to my girls @MomonEmpty and @agirlrunner for their support here.  Hopefully we'll see some positive changes with the encouragement offered.  For now, I'm keeping planks in my cross training plan, but I'm not sure how much I'll tweet about them.

Sept 1 Update:
While Mike, one of the founders of #plankaday noted in his comment below that I have been removed from the Plank Police's list, I've since been mentioned in two tweets that are similar to above.  I will be sending a message once again requesting to be taken of the list.  Hopefully this time it will work.
Posted by Allison