When we lived in Michigan, my brother-in-law's hockey bag was The Grossest Thing Ever.

It was big.
It was bulky.
It was Stank Butt Nasty.

Every athlete knows that smell.  That post-workout, "The Grim Reaper would probably hand over his scythe if he got a whiff of me" smell that probably even offends the dog.  The dog who eats from the trash with no qualms.
Of course, like, oh, probably most women, I didn't think that it applied to me.  That smell was Eau de Men's Locker Room.  While I'm not a huge proponent of the "we don't sweat; we glow" argument, I was convinced that, by virtue of estrogen and ovaries, I was immune and happily griped about my brother-in-law, his buddies, and their collective stench after their games.

Have you ever run when it's 90°, at 4:30 in the morning - before the sun comes up - right after a ginormous monsoon cranked up the humidity to Ludicrous Speed?  Because if you have, you know where this discussion is going.
You probably actually would know that regardless.  I have a pretty awful poker face. P-p-p-poker face
(yeah, I went there).

Anyway, back to where I tell you about how totally and utterly repugnant I smell when Zooey and I get back from our runs.
Like to the point that HRH, in her preschool innocence and lack of filter phase of life, will merrily scream at the top of her lungs, "Mommy!  You stink!" and then not want to give me a hug for fear that she'll start attracting flies.

The good news is that I can shower and smell pretty rather fast.  I'm not a shower lingerer, so once the business of Getting Clean and Unstanky is over, I'm out and done, fresh as a daisy.
The bad news is that getting that same funk out of my running clothes isn't as easy.
There are a few reasons for that:
That's right; we're back to me being all crunchy and trying to go off the grid.

But I'm holding fast to this; between The Husband and myself, we create exactly one laundry load (of six) each week that is dedicated to athletic gear.  Investing in a special detergent, which is probably just a different label and a little extra "fragrance," isn't worth my money or my health, or, quite honestly, the health of our beautiful planet.
So my challenge was to find a way that used a more natural approach but at the same time did manage to leave me with a pile of clean and neutral-smelling (no nasty perfumes here!) workout clothes when all was said and done. 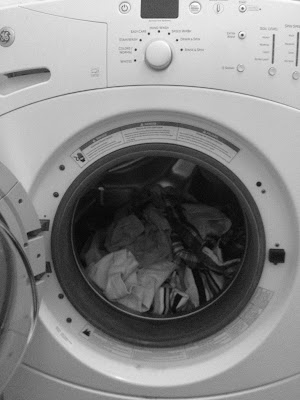 Well, it took me some time, but I think I've got it.  And the process was easy, inexpensive, and you probably have everything already.  Except the natural laundry detergent that is just a step away from me making it myself, which I want to try at some point in the near future.
If you don't have a more natural detergent or, for some weird reason, don't make your own, you can use your regular detergent.  But try to make sure that you use one that doesn't utilize fragrances to perfume and cover odors (I'm well aware that I sound like a freakin' Febreeze commercial - the irony, right?) instead of actually getting rid of them and the gunky stuff that is causing that Sasquatch stink.

And, for the sake of All Stuff that is Fun, can you please imagine me giving you these directions in some sort of Donna Reed or Harriet Nelson get-up, apron and all?
This strategy even worked on one of my Sparky the Sun Devil technical shirts, which would just not shake that smell for a good long time.
I'm hoping that whenever the Arizona temperatures decide to cool off in about three or four months from now, I can at least get back to the house before I nauseate myself.  But I'm definitely going to work on perfecting this.  Hey - it even worked on Zooey's collar, a haven to Hound Musk everywhere!
Go ahead - try this and let me know how it goes.  I can guarantee that you won't turn crunchy by trying.  Unless you decide you want to.

How do YOU get the stink out?
Posted by Allison