Have you ever given your home address out to a bunch of random strangers you met on the internet so that they could send you stuff?
Probably not.
So then, you probably haven't said to those same random strangers, with whom you now speak every single day, "Hey, if you're ever in my neck of the woods, come stay with me!"
Well, I have, and I'm all the better for it.

Sidebar -- I am a huge HUUUUUUUUGE fan of Alton Brown.  Husband and I have used many of his recipes and techniques over the years; in fact, Mr. Brown's corned beef recipe is the only one I will use.  We adored Good Eats and mourned its end.
As such, I read the announcement of the Edible Inevitable Tour with utter giddiness, and I was delighted that he made a pass through the East Valley.
Not being alone in my adoration, Beka immediately checked the tour schedule and, realizing that there would NOT be a stop in the Pacific Northwest, made plans to come down and go to the show with me.
Timing being what it was, her trip overlapped with her being assigned my name for our One Kitchen, Many Hearts gift swap.  So basically, this trip was Meant to Be.
Before I get back on track: y'all. If Alton Brown is coming to your town, GO TO THE SHOW.  It was hilarious and fun and oh my gosh pray that someone in the front row is late.

On to the goods, as it were.
Most importantly, I am the new proud momma of an actually rectangular 9 x 13" pan for marshmallowing.  Previously, I had been making my mallows in my Pyrex pan, which is awesome.  But if you have a Pyrex pan, you know that the edges are rounded.  No big deal for casserole dishes, etc., but when you want to make something that is a "perfect" cube, those rounded edges make for some waste.
OK, so I used those "butt" pieces to take selfies with marshmallow mustaches and to "quality control" the hell out of every batch.  BUT STILL.  This new pan, which can also double (I guess...sigh...if I have to....) as a roasting pan will add at least five or six more mallows to every batch.
So far, they've been used to make two new fabulous mallows flavors.  I don't have a picture of those mallows, though, because, um, well.... I ate them.

If that weren't enough (it seriously would have been - I am already planning like ten more flavors), Beka took me shopping.  I remember back in the day BC (Before Child) when I'd watch What Not to Wear and swear that I'd never become "that mom" - you know the one: the mom who puts herself last and then forgets how to shop and what looks good on her.
Guess what I turned into.
(Spoiler alert: "that mom" - I turned into "that mom")
When I attempt to shop for items for myself that are not running gear, I usually end up feeling guilty about buying something when I work from home and can basically wear yoga pants if I want to, getting frustrated when I don't find anything that works (I have a standing rule that I will not purchase anything unless I love it), giving up on fashion altogether, and using the money to buy something for Her Royal Highness, who, because she insists on growing constantly, is always in need of some item or other.  When shopping with Beka, I was not allowed to 1) have hangups about buying something for myself, 2) have limited time (yes, I still feel guilty about spending time in a store when I could be home with HRH), or 3) give up easily.
Shockingly, it's easier to follow the rules when someone holds you accountable for them.
Beka has a fantastic sense of style and an eye for what will work on a person.  We had planned to have a shopping day already, but the big surprise was that she bought this houndstooth dress while we were out.
And I ADORE IT: 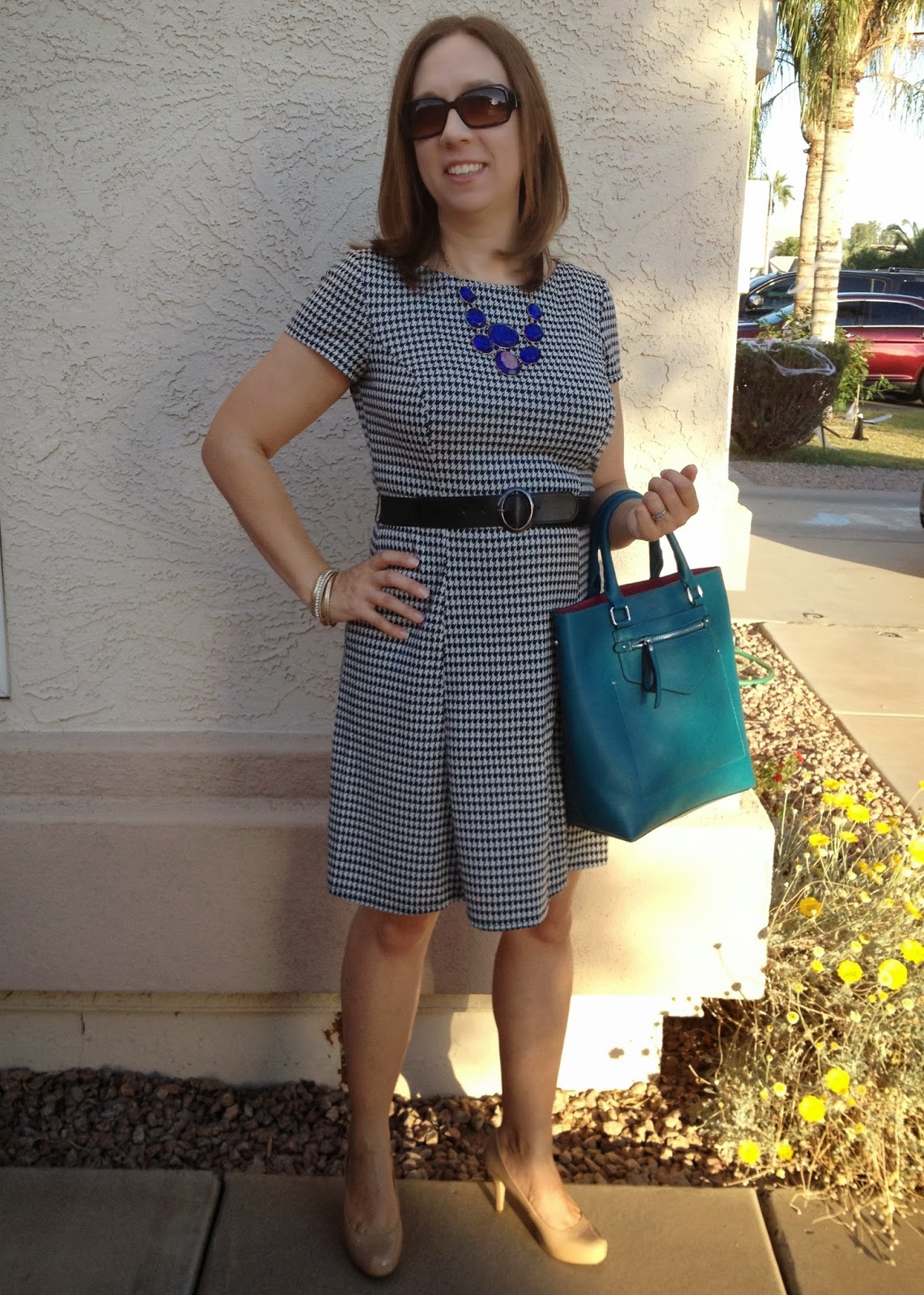 She also tutored me in such remedial courses as Why We Buy Nude Shoes 102 and How to Overcome Your Fear of Jewelry 130.  Thankfully, I didn't need to go back to Handbags Are Your Friend 080 and nabbed the above teal number without too much assistance, although goading may have been involved.
All in all, I bought two dresses, two shirts, two pairs of shoes, a jacket, a handbag, sunglasses, a necklace, and a bracelet.  I love them all.  I got nothing for HRH.  I felt no guilt.  It was glorious.

Honestly, though, the Most Wonderful Gift that Beka brought me, which can't be packaged up, was her company.  It's been a bit of a stressful fall at work, and the respite from Groundhog Day, the Sequel, and the hilarity that ensued over the long weekend, was exactly what I needed.

Of course, after Beka's plane landed, I immediately took her to one of my favorite local breweries, San Tan Brewing Company, where we snapped a terribly blurry but hilarious selfie.

We drank plenty of wine.

We also had plenty of beer. 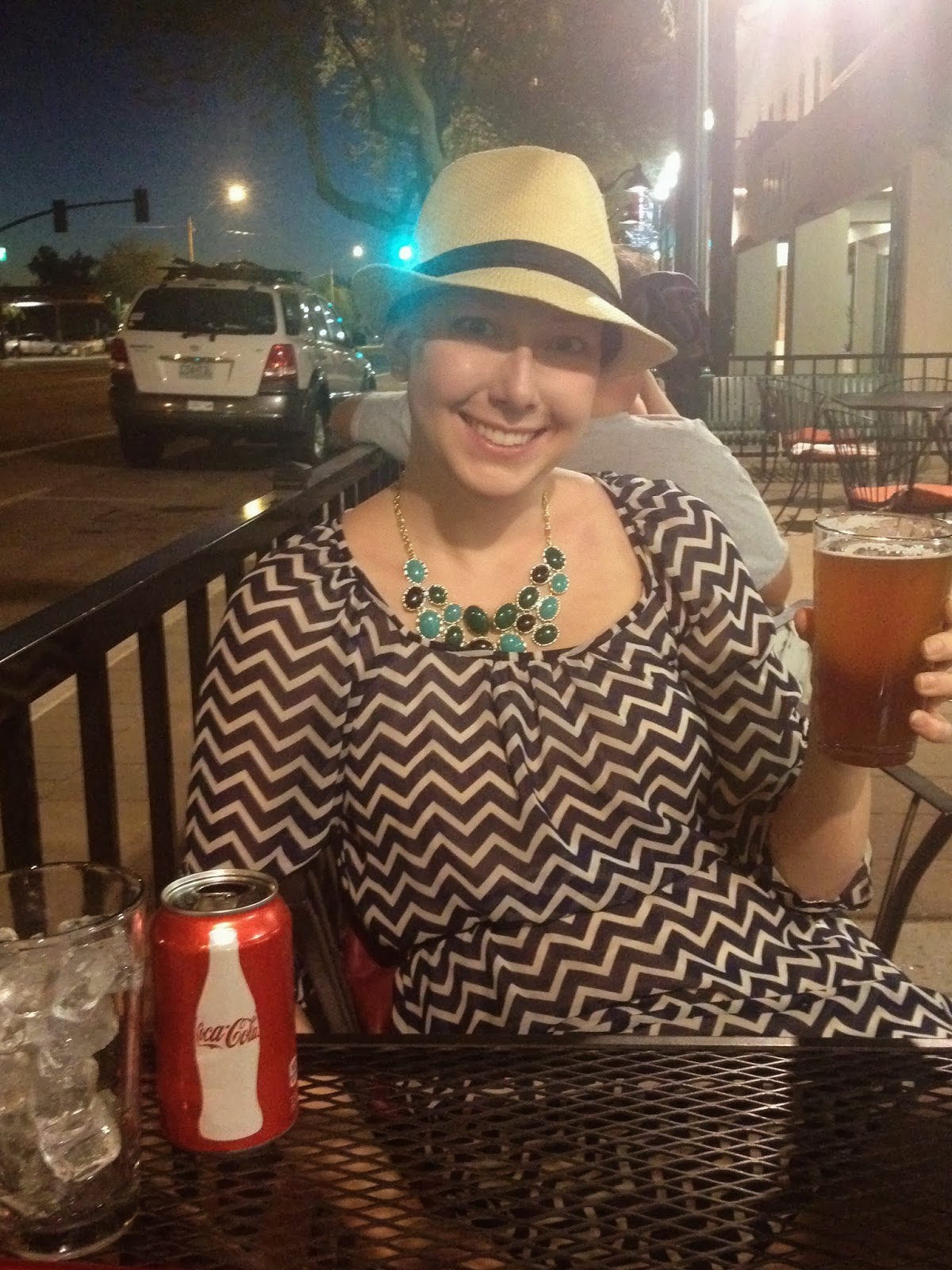 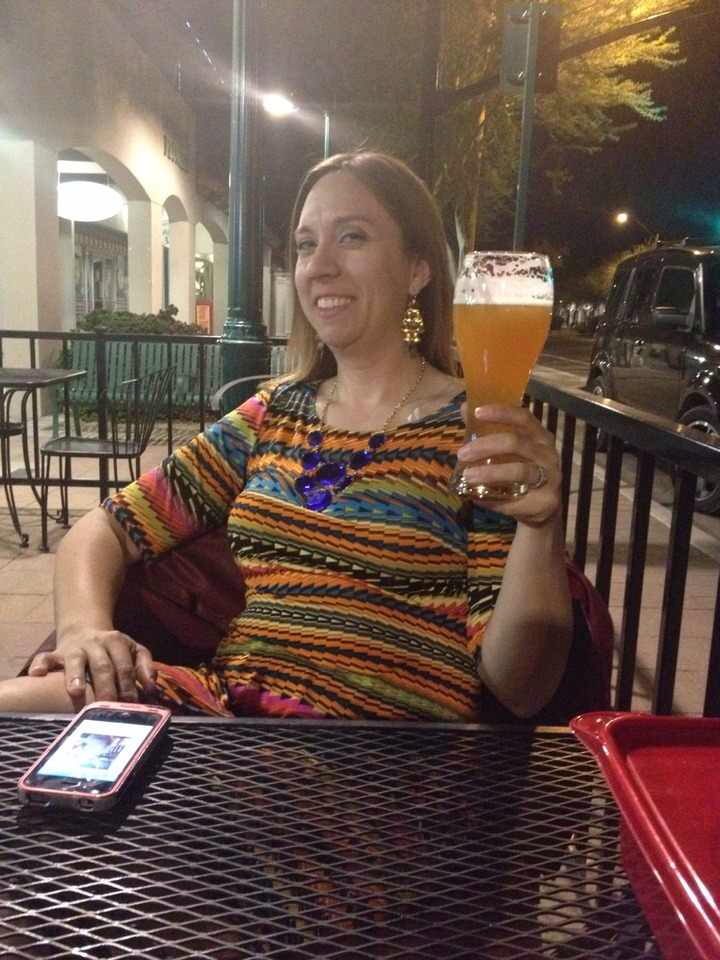 We bought the same shirt on purpose.

We made and/or ate OMGSOMUCHFOOD.

It was seriously The Best Weekend.

Now, not everyone got to hang for a full weekend for a gift exchange, but I can't wait for you to see what I sent to Kisrten (second spoiler alert - marshmallows from my new pan were involved).
Make sure to check out the goods in this Free For All Stuff Whatever You Can Into the Box theme.  After all, the holidays are coming, and you never know when or where inspiration will strike.
Beka/Kvetchin' Kitchen
Jeanne/Inside NanaBread's Head
Kat/Tenaciously Yours,
Kirsten/Comfortably Domestic
Mads/La Petite Pancake
Megan/Wanna Be a Country Cleaver
Then get out there and see if you can't ship off a Package of Surprise Fun to someone to see how your day can be made by making someone else's.
Posted by Allison