Pumpkin All the Mallows!

I have a confession.

But aside from Husband and myself, most people I know look forward to the first day of Starbucks pumpkin latte season fall like it's Christmas in order to get their mitts on some pumpkin goodies, which are then hoarded like Gollum's Precious.
Who am I to rain on the pumpkin parade?
As such, when my favorite group of food bloggers decided to get together for Pumpkin Week, I needed to get on the bandwagon. 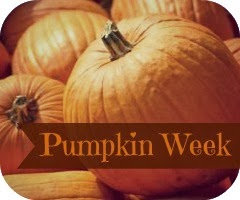 So naturally I decided to make pumpkin marshmallows. 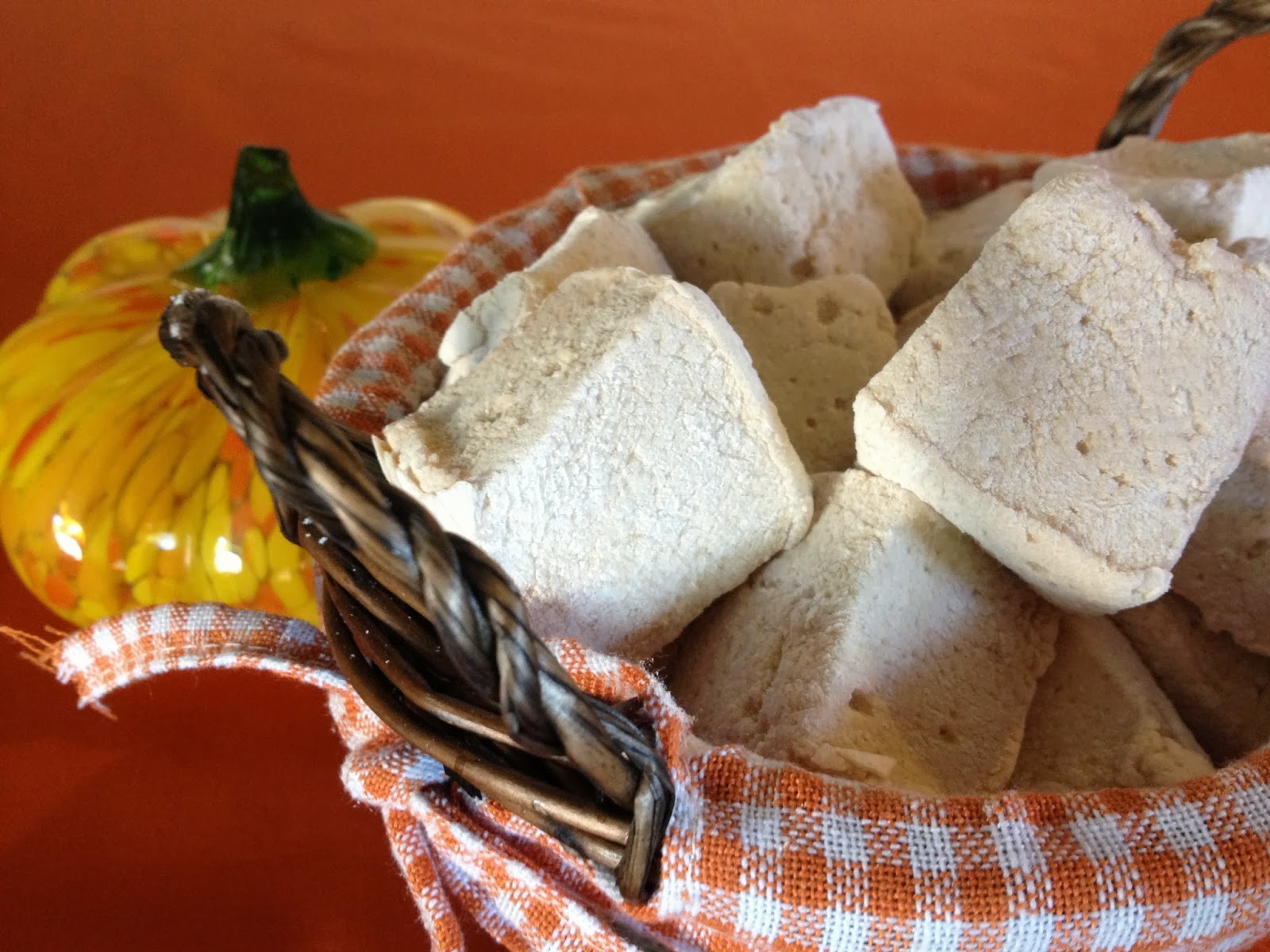 Now, if you'll allow me to get on my soapbox for a moment...
*clears throat*
The pumpkin marshmallows you can buy at any local grocery store do not have any actual pumpkin in them.  What they DO have is "natural and artificial flavors" as well as Yellow 5, Red 40, and more.
Mmm-mmm-mmm.  Yellow five.... My favorite.

Not that I am touting my marshmallows as a healthy food by any stretch of the imagination.  But I'd like to think that a candy made with real pumpkin and no artificial colors is at least a teensy bit better on the scale of Things That May or May Not Kill You Someday if You Eat Too Many of Them. 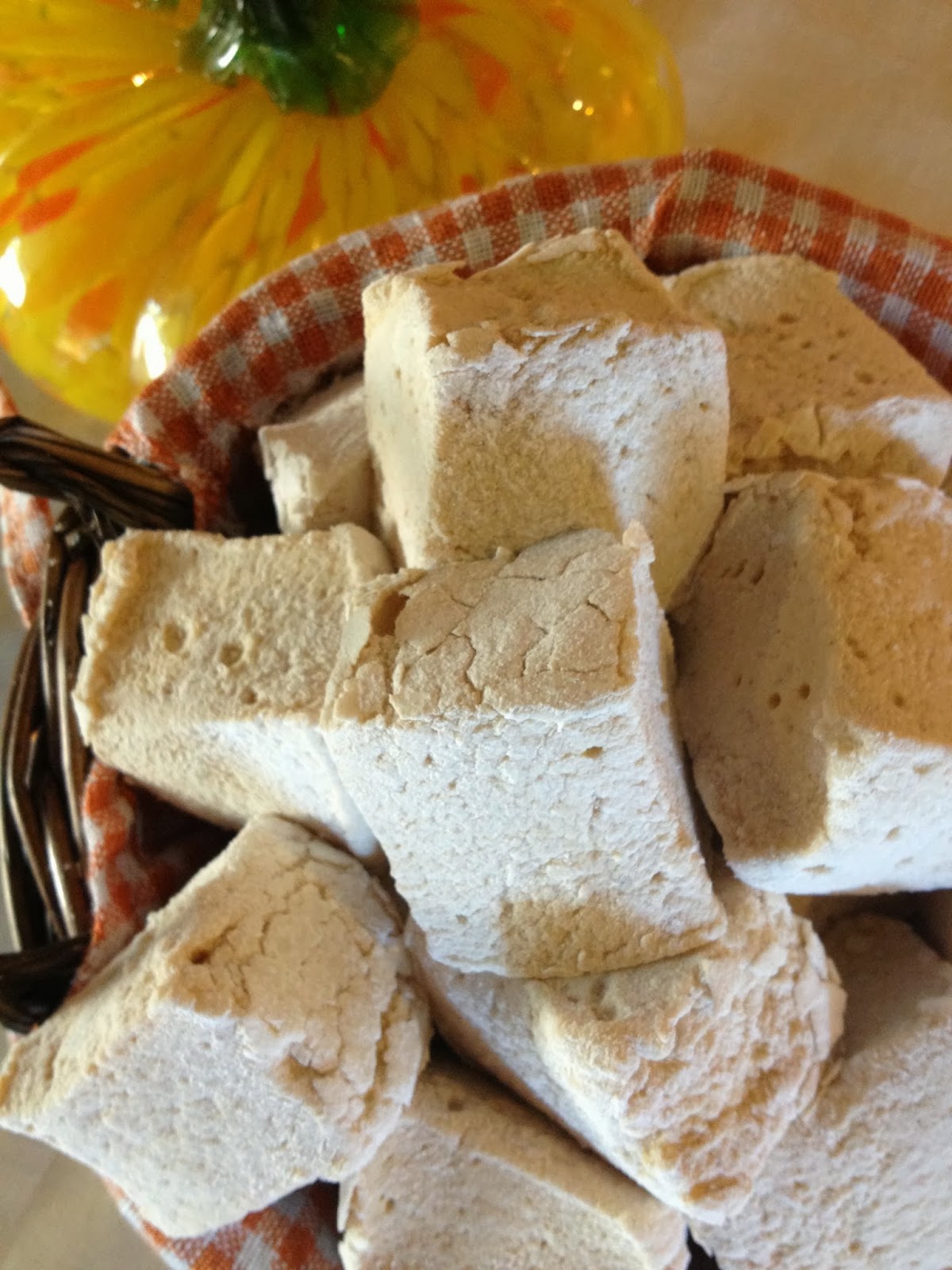 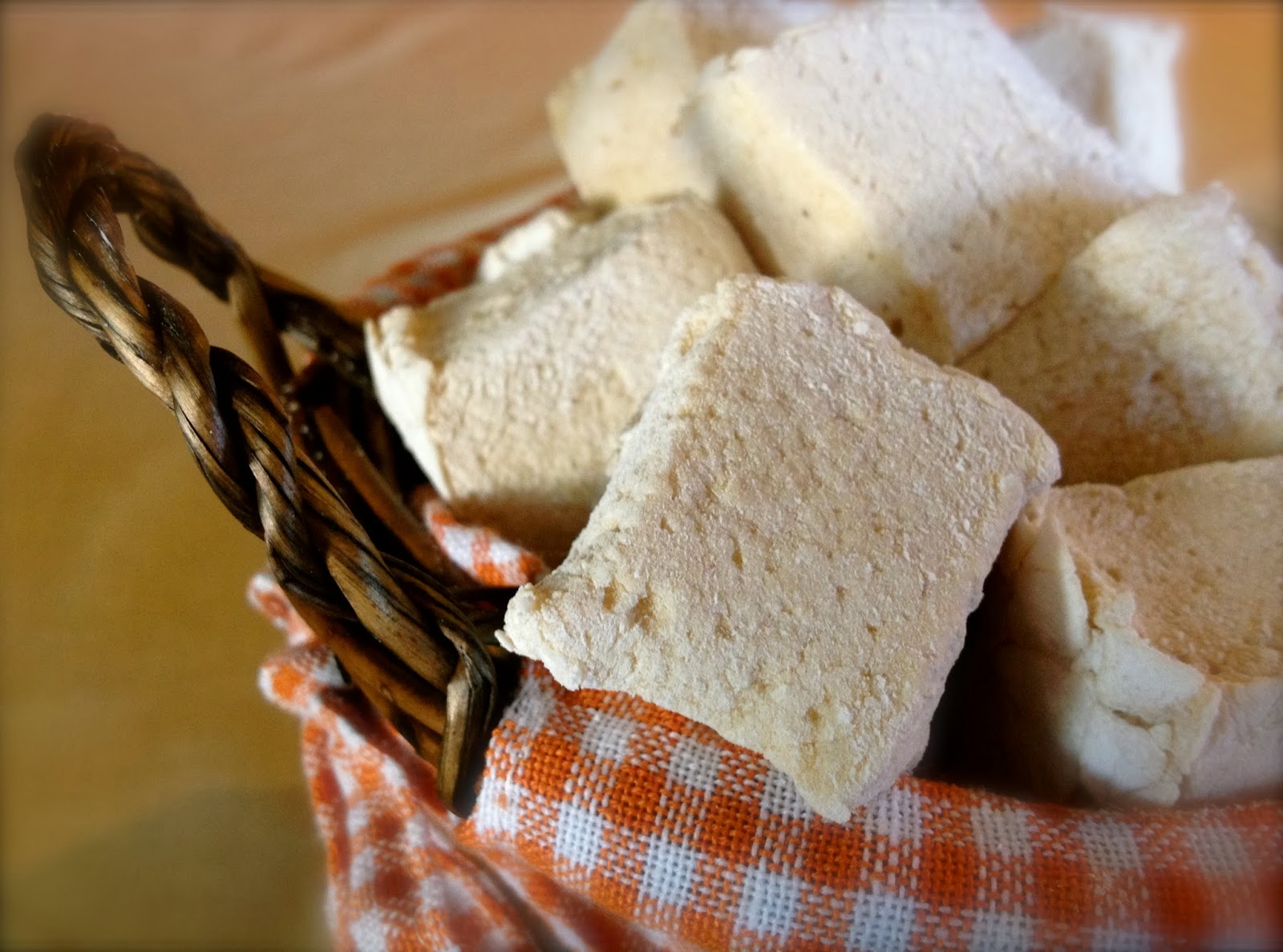 Most of the pumpkin marshmallow recipes I've found whip in a bit of pumpkin puree at the end of the mallow-making process, and while that will certainly bring the pumpkin flavor out, I felt like I needed to ensure that the flavor had some serious depth in order to appease the pumpkin lover's palate.  To get that, I used both a "pumpkin water" as well as a pumpkin spice syrup, which can also be swirled into your morning coffee.  This method might take a bit longer to make, especially when compared to those store bought Pillows of Horror, but in the end, my happy taste testers can verify that this is a mallow worth its spice. 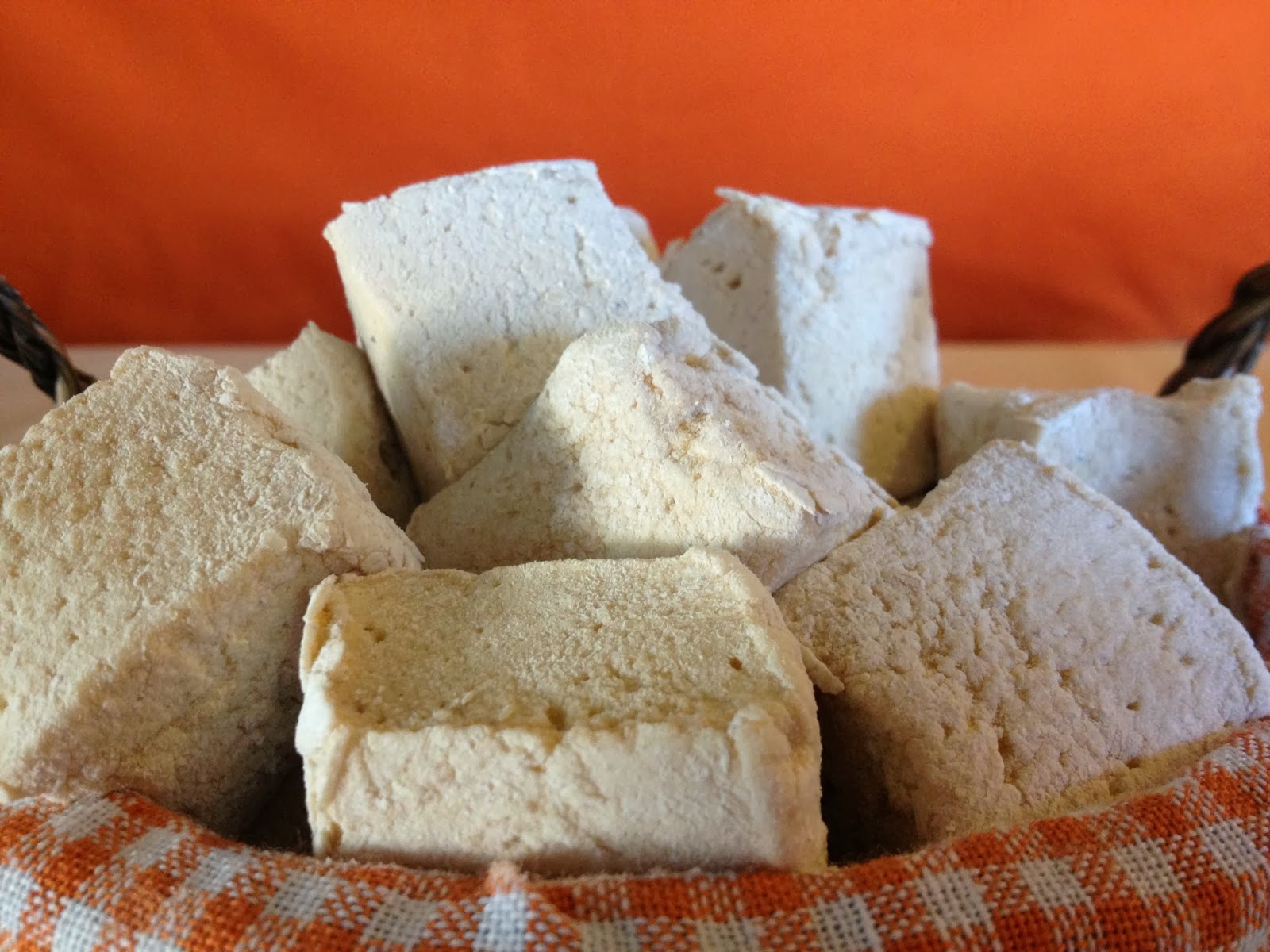 Pumpkin Marshmallows
adapted from Jenni Fields's Pastry Chef Online
Combine the "pumpkin water," salt, and vanilla extract in the bowl of a mixer.  Sprinkle gelatin over the mixture and stir to combine, being careful to get rid of any lumps.  Set aside.


Spray a 9X13 pan with either pan spray or coat with oil (I use my Misto and olive oil).  Line the pan with plastic wrap, and then coat the top of the plastic wrap with oil.  Coat completely with your powdered sugar and corn starch mixture.  I've played around with how much, and what I've found works well for me is to coat completely and then tap out the excess.  This makes, for me, a less clumpy end product.  Set the pan aside.
Bring sugar and syrups (and a splash of water) to a boil.  Continue to boil until the mixture reaches 244° (the soft ball stage).
When the syrup mixture reaches about 235°, turn on the mixer, using the whisk attachment, to low or medium low.
As soon as the syrup reaches the proper temperature, remove and pour into the mixing bowl, continuing to whisk on low/medium low.
Gradually raise the speed of the mixer.  Continue to whip until the mixture has about tripled inside (read: you're fearful it will overflow) and it starts to come off the sides of the bowl in small threads.
Using a large spatula liberally coated with pan spray or olive oil, pour the marshmallow cream into the prepared pan, carefully spreading it out evenly.  Take a pause to lick the spatula before throwing it in the sink.
Sift the corn starch-powdered sugar combination over the top of the marshmallows, making sure that you can't see any of the shiny mallows under the snowy powder.  Allow to sit, uncovered, for several hours or overnight.
Once the marshmallows are set, invert the pan over a large cutting board.  Use the plastic wrap to easily remove the marshmallows from the pan.  Cut into one inch cubes, tossing each in more corn starch and powdered sugar before storing in an airtight container for about a week (or however long the mallows last).

I did try out the marshmallows with a bit of cinnamon with the powdered sugar and corn starch mixture, but I felt that this made the flavor lean too heavily in favor of cinnamon, but if that's your jam, you get down with your bad self. 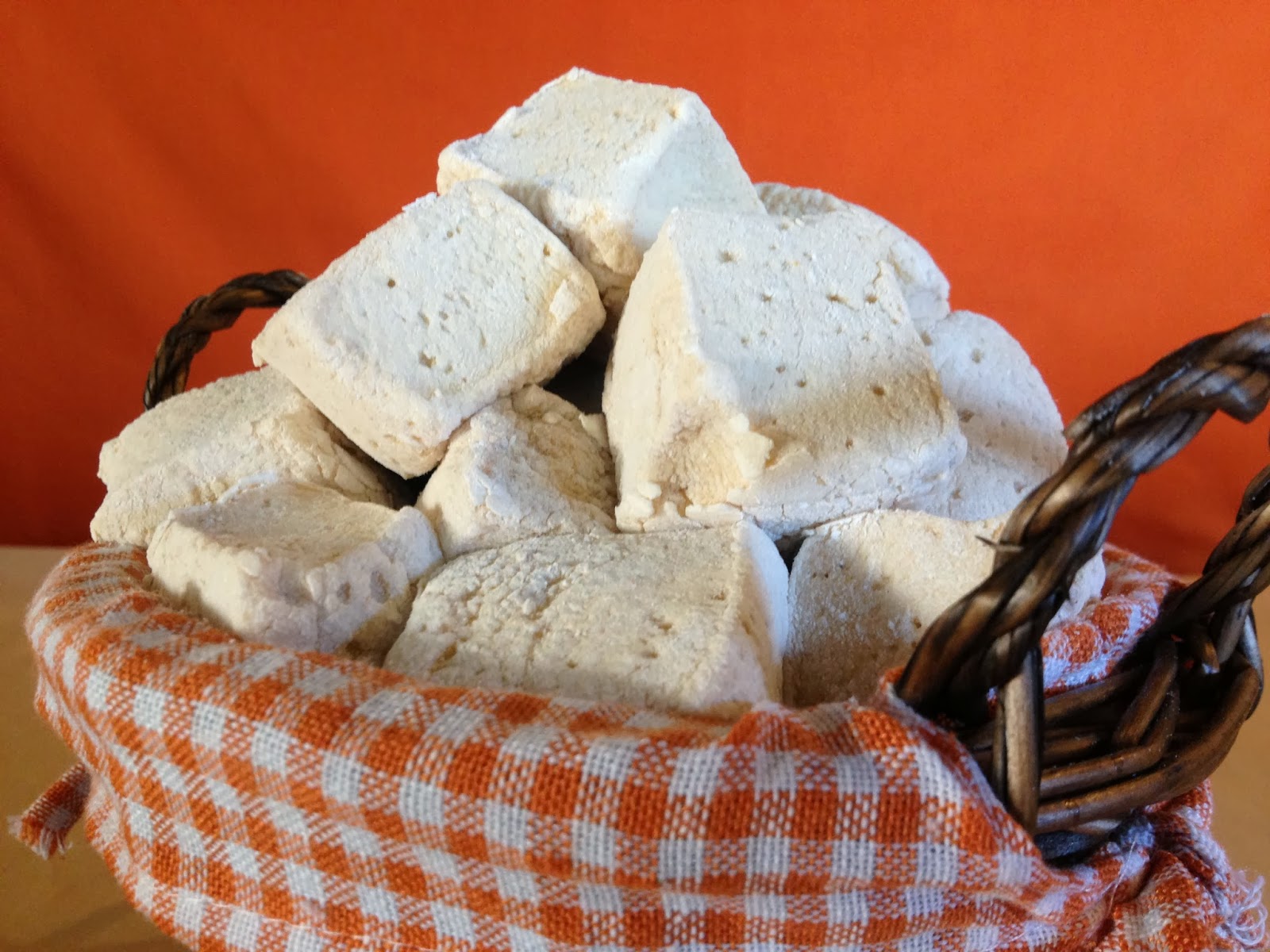 Pumpkin Spice Syrup
Combine all ingredients in a medium saucepan and heat over medium to medium-high heat while the sugar dissolves.  Continue to heat until the mixture reaches a boil.  Turn heat to low and simmer until the liquid has reduced slightly (to a syrupy consistency).  Cool to room temperature, and immediately strain through a very fine mesh sieve or even cheesecloth.  Set aside until ready to use.

Now, a major shout-out to my girl, Megan, an affirmed pumpkin aficionado. Last month, as I started to work on the recipe, I sent her my first batch of both the syrup and the marshmallows.  In addition to helping me determine the proper balance of flavors in the syrup (I had my suspicions, but it helps to talk to someone who actually partakes in pumpkin lattes....), she also told me that her husband Ben had been putting the marshmallows in his coffee, so there's THAT.  You're welcome.  Thanks, Megan, for helping me get a syrup that is neither too sweet nor too spiced, but one that puts all the flavor of fall into whatever medium you like best!

Can't get enough pumpkin?  Then you're in luck - the Theme Weavers are at it again, so just peruse through these recipes to get your fill, and then come back for more!

And later this week, we also have:
Posted by Allison