*taps mic*
Anybody out there?
HEEEEEEYYYYYYYYYYYYYY! Long time no blog!
This fall has been insane. Between work, my classes, and PT, along with all of HRH's activities, has left me little time to sit and blog. I'm a year away from graduation.
But that's not really why I dusted off the laptop.

Today marks six months since my hip surgery. Six months ago, my orthopedic surgeon poke two holes in my upper thigh and shaved down my ball joint so it didn't rub against my socket anymore. It was actually a fairly quick surgery, as surgeries, go, and I was home later that day and back at physical therapy the next day.

And I have worked my tail off at therapy in these last six months. My ortho said it could take between six and eighteen months to fully recover, but after almost two years of Not Running, I'd like that recovery to be closer to six.
Lately, we've stepped up the plyometrics and abdominal work. I haven't done plyos since I was in high school track, so that's been…challenging. I have the grace of a sprinting basset hound, so hopping over even the shortest hurdle surely causes laughter to those who may be watching (I know this because they don't wait until my back is turned). Even so, I'm keeping at it, since I am continuing to make progress, upping weights and leveling up.
And, if you've followed me on Instagram (which is about all I can muster blogwise of late), you'll know that the most exciting news is that I have actually been able to run.
Twice.


So that's what I've done.
Twice.
Holy cats, running is hard!
We can start with everything to which I'm trying to pay attention. Before I got hurt, I (made the mistake of) ran somewhat mindlessly. That isn't to say I didn't pay attention at all; I just let my mind wander, especially if one of my favorite jams came on my playlists. Running was a way for me not to have to focus on something - work, class, other people - so I admit that I probably ignored my form. So now to pay attention to my foot strike (which I did before…usually) along with knee position and how much I am leaning and where my arms are and how long my stride is and whether I'm kicking my heels up instead of lifting my knees appropriately…it's…it's a lot. HRH is currently working on perfecting her butterfly stroke, and she struggles timing her arm movement with her dolphin kick, and I know exactly how she feels.
Like I said, sprinting basset hound over here (If you can't get that visual, here you go).

We also need to talk about how I could NOT get my breathing under control. You'll be surprised to know that after almost two years Not Running, Not Cycling, and Just Learning To Swim Again, my endurance is at a record low. So even though I felt on my second run that I had the loading under control, I had to stop and walk a bit to catch my breath before starting again. Sucking wind is a look I'm going to need to get used to for a while.
Am I ready to start Couch to 5K yet?
No.
Even though I downloaded it.
But I'm getting stronger, and the fact that I have been cleared to do a bit of slow running as I basically learn how to run all over again is exciting. We are at the minimum marker for "full recovery," and while I know that I still have a ways to go before I announce to the world that I'm training for my first marathon, I'm starting to see the proverbial light at the end of the tunnel.
And hey, I may never be fast, but at least I'll be able to put one foot in front of the other and enjoy the forward motion. And for that, I am grateful. 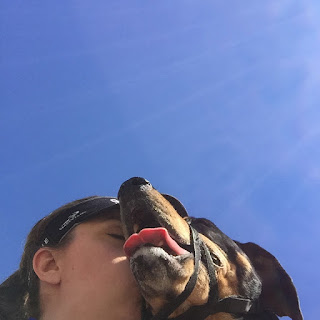