Mellow brown sugar marshmallows and creamy vanilla caramel sauce are the perfect accents to the smokiness of the pecans, almonds, and cashews in this homage to the pride of Nashville. This is definitely not your daddy's Goo Goo Cluster, but it's a smoky, sweet morsel that will surely cause Santa to add you to the permanent Nice List. 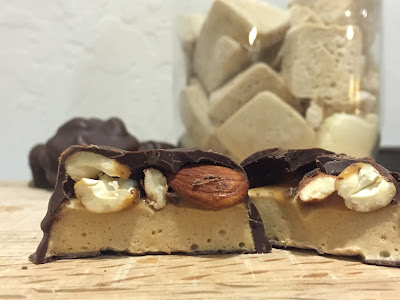 When I was a young pup, my dad brought home the most magical, delicious, and exotic treat from Tennessee after attending a conference in Nashville. It was a Goo Goo Cluster - a marshmallow nougat, topped with caramel and peanuts, and covered in chocolate. He also brought home a few Goo Supremes, which replaced the peanuts with pecans (it wasn't until the early 1990s that the peanut butter Goo Goo was released).
They. Were. Divine.
So divine, in fact, I decided to leave one for Santa in lieu of the regular cookies and milk that year.
Santa appreciated it so much that he left me a note telling me how much he enjoyed the Goo Goo Cluster and how it was a rare treat for him, since (at the time) they were rarely found outside of the South.
Basically, Santa told me I was a BAMF for leaving him such a treat.
I've never forgotten how that felt.
This year, when Husband made a large batch of smoked mixed nuts for office gifts, my wheels got to turning as to how to use the leftover. It only took seven seconds for me to decide to try my hand at this favorite childhood treat and memory.
And you can bet that I'll be leaving a few of these for Santa this year, too. 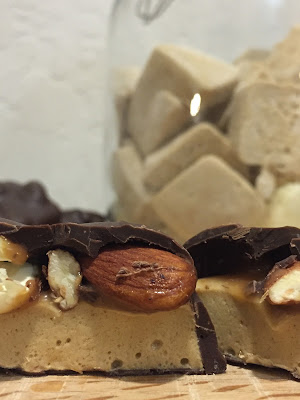 Smoky Mountain Clusters
(inspired by the Tennessee original and one of my favorite candies in the world, Goo Goo Clusters)
Yield: 4 dozen*
I recommend that you prepare the caramel sauce and the marshmallows the day before you plan to make these so they have time to set (and so you have time to clean; some people might think this is a messy project, but I prefer to think of it as creative), although you can do it all in the same day if you make the sauce and mallows early enough.

For the marshmallows:
Combine the water, salt, and vanilla extract in the bowl of a mixer.  Sprinkle gelatin over the mixture and whisk to combine, being careful to get rid of any lumps.  Set aside.
Spray a 9X13 pan with either pan spray or coat with oil.  Line the pan with plastic wrap, and then coat the top of the plastic wrap with oil.  Coat completely with your powdered sugar and corn starch mixture.  I've played around with how much, and what I've found works well for me is to coat completely and then tap out the excess.  This makes, for me, a less clumpy end product.  Set the pan aside.
Alternately (and this is what I've started doing since my last marshmallow post), you can use silicone moulds, making sure to spray them with either pan spray or coat them with oil. You'll need enough moulds to make 80 marshmallows (this is four Wilton baking moulds or 5 Chicago Metallic marshmallow moulds; you will have leftover mallows using either method, which are great in coffee and cocoa).

Bring sugar, syrup, and and a splash of water to a boil.  Continue to boil until the mixture reaches 244° (the soft ball stage).
When the syrup mixture reaches about 235°, turn on the mixer, using the whisk attachment, to low.
As soon as the syrup reaches the proper temperature, remove and pour into the mixing bowl, continuing to whisk on low.
Gradually raise the speed of the mixer.  Continue to whip until the mixture has about tripled inside (read: you're fearful it will overflow) and it starts to come off the sides of the bowl in small threads.
Using a large spatula liberally coated with pan spray or olive oil, pour the marshmallow cream into the prepared pan, carefully spreading it out evenly.  Take a pause to lick the spatula before throwing it in the sink.
If you're using moulds, pour the mixture into two 16" piping bags, each fitted with a plain tip (I used a 5, although I'd prefer a bit smaller). Pipe the marshmallow cream into each mould.
Sift the corn starch-powdered sugar combination over the top of the marshmallows, making sure that you can't see any of the shiny mallows under the snowy powder.  Allow to sit, uncovered, for several hours or overnight.
Marshmallows in moulds will be ready much sooner, although I still prefer to let them sit overnight.
Once the marshmallows are set, invert the pan over a large cutting board.  Use the plastic wrap to easily remove the marshmallows from the pan.  Using a serrated knife, cut into one inch cubes, tossing each in more corn starch and powdered sugar before storing in an airtight container for about a week (or however long the mallows last).
Marshmallows in moulds can be manually popped out; even though it might not look like it, they will retain their shape; toss in the corn starch and powdered sugar mixture before storing.
*I used moulds for this project, which is how I got 4 dozen of them; if you make the marshmallows in a large pan, your yield will likely be different. 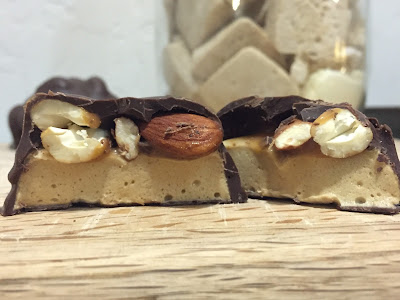 To assemble:
Apply a tsp caramel sauce to the top of each marshmallow, and cover with smoked nuts. Pop these in the freezer while you melt the chocolate.
Melt the chocolate wafers in a double boiler over low heat (don't boil the water) until smooth.
Once the chocolate is smooth and melted, work in batches of 8-12 marshmallows at a time (keep the rest in the freezer until you're ready to coat them). Using a fork and a spoon, dip the bottom of the marshmallow into the chocolate, and then spoon chocolate over the top, ensuring that the entire marshmallow is covered. Place on a wax paper covered cookie sheet, and chill in the refrigerator for at least thirty minutes.
Keep refrigerated; share generously.