On Sunday, our friend Danielle brought up our limoncello to begin "Phase 2" of the process.  I hadn't seen our little jar since January, and it was YELLOW.  The lemon zest really had gone to work, coloring the Everclear a bright canary yellow.
We then made a simple syrup; after it cooled, we poured it in.  The liquid and zest swirled around, and it immediately became cloudy - a good sign, according to my friends who have made it before.  I then set it aside, and we wait, once again, for at least 45 days.  After that time frame (if we can wait longer, we will), we'll be able to filter it and should have limoncello!  My friends plan to give theirs away as gifts... sorry, friends.  We are splitting it with Danielle and keeping it, but perhaps if you come visit us in the heat of the summer, we'll share a sip or two.
Unless it's terrible - then we'll give it away.

For dinner, I attempted my first polenta.  I love shrimp and grits (Scott... not so much, but they sounded so so tasty), and grits and polenta are degrees of the same thing.  Thus, I boiled my water, added my corn grits, and stirred and stirred and stirred as the mush thickened.  Then, in order to make those humble grits into fancy shmancy polenta, I poured the mixture into an oiled yogurt container (it was empty...), and I let it set.
In the meantime, I checked my roasted root veggies, which included kohlrabi, turnip, radishes, and an apple thrown in with our last green garlic, olive oil, and salt & pepper.  We received fennel, but I"m a little terrified to try it.  Neither Scott nor I care for licorice, so this will be the biggest "risk" we've taken with our CSA share.  I've been told that the flavor is muted when fennel is cooked, so it's something that I have to try.  I also wilted some greens (chard, collards, and the kohlrabi greens), and sauteed the shrimp. 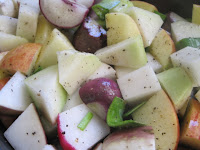 Then, it was go time - time to see if my polenta set.
I placed a plate on top of my yogurt container.
I inverted the whole thing.
I gave the container a little tap.
I lifted the container, giving it a little jiggle.
Sluuuuuuuuuuuurrrrrrrrrrrp - the polenta came out!
And then - it collapsed.  BOOOOOOOOOOOOOOO!
Oh, well.  I announced, rather too grandiosely, that we were having shrimp and grits for dinner.
Sigh.
Dinner was still tasty, although it wasn't as "pretty" as my grand polenta plan.  But you know, it all looks the same in my belly, and in the end, the decision was made to not make dessert because we were all full.