Pizza! Pizza! (and a tribute to Frau Ramm)

I just returned from my trip to the Pacific Northwest.  While I didn't get to as many places as I had hoped, I still managed to chow down at a few venues that you NEED to know about.
Most people have heard about the Pike Place Market in Seattle.  It's a fantastic market.  But one wonderful aspect of the PNW is that there are farmers' markets everywhere.  The rain that many people bemoan allow veggies and fruits of all kinds to grow easily all over the western half of the state.  Olympia, my home town, has a rockin' farmers' market that has been a staple for years, so it was fantastic to be able to hit it.  I was jealous of all of the stands that offered plants that could be taken home and popped in the ground.
Well, of course, HRH was bored, even after she got a balloon butterfly, and she promptly asked for ice cream.
Have you ever seen three-color cotton candy flavored ice cream?  Neither have I, and while just the name makes me cringe, she yummed it up as fast as she could. 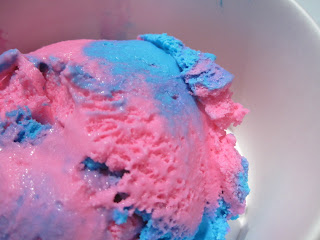 Thankfully, I could ignore the brightly colored treat, as I had a few treats of my own - a slice of Bienenstich and a "nibble" of sesame cashews.
Bienenstich is a German goodie that means (basically) bee sting cake.  As you may guess, honey is a component of this square of deliciousness.  When I was in high school, my German teacher, Frau Ramm, allowed the third year students to go to Wagner's European Bakery and Cafe once a trimester; the fourth-years were allowed to go once a month.  While Wagner's has all sorts of amazing goodies, I have always zeroed in on this one.  Wagner's makes its Bienenstich with two flaky layers of the cake that sandwich an equally thick layer of Bavarian cream. All of this is topped with a crunchy almond and honey concoction.  All of this together makes for a very happy mouth.  So I was more than just a little excited to see it offered at the bakery's farmers' market stall.  It was Frau Ramm that started me down my path of love of the German language, culture, and of course, the food, and I thank her for both the experience of memorizing grammar and heading downtown for lunch at Wagner's.
Now for those sesame cashews.  Ohhhhhhhhmyyyyyyyyyygooooooooosh!  If you've ever had those tasty, roasted nuts in the paper cone, you know how good they are, but these were out of sight delicious.  My mom had the lime coconut almonds; they were tasty.  But I love love love sesame, and the sesame cashews had just the right about of sweet with that lovely, deep sesame flavor.  I totally regret getting the smallest size cone.

But that was just a snack, and lunch was soon upon us.
Whenever I go to Washington, there is one place that I MUST go: Dirty Dave's Pizza Parlor in Lacey.  I have been going there all my life (literally).  It's totally a dive (although they got all uppity a few years ago and painted over all the graffiti that had accumulated over the years), but it has great food. I always get the same thing: the Gay 90's Special pizza and a Jake.
The Gay 90's is the restaurant's signature pizza, and is has pepperoni, sausage (not link sausage - the loose, crumbly stuff), white onions, and... wait for it... cashews.  Yes, cashews.  They are amazing on pizza.  Sadly, they haven't caught on like I think they should.  All of these ingredients are on a Neopolitan-like thin crust that has, sprinkled on the bottom, corn meal.

Now, there are many other pizzas on the menu at Dirty Dave's, but I can honestly say I have never had any of them (there is one that has shrimp and mushrooms that I've always been curious about).  Same goes for the Jake - there are other sandwiches, but I don't even know what they are. 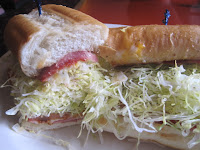 The Jake is a hoagie/sub/grinder/bomber/hero, and in all actuality, the only ingredient that stands out as "special" is the house salad dressing (a vinaigrette) that is poured over the top.  But oh, yum.  Hooray for processed meats, iceberg lettuce, and white, squishy bread (hey, I only get it once a year)!
Dirty Dave's is one of those places that all those travel food shows talk about - the one that stays consistent year after year.  When I eat my Gay 90's Special and my Jake, I could be ten again and there with my mom and dad.  It's one way I stay connected with my dad's memory, and I'm always happy when I'm there.
OK... if you are like me, there is always room for pizza, so when my friend Katie suggested we go to a local Neopolitan place in Columbia City (Seattle) for dinner after spending the afternoon at the Seattle Aquarium (the sea otters were sooooooooooooooo cute!), I was down.  This was after the snack waffles that we had on the way to the aquarium, which were a lot of fun, and next time I am up there, Katie and I need to make another trip to the espresso bar that offers them (as well as paninis).
HOLY SMOKES!  If you are in the PNW, you need to RUN to Tutta Bella Neopolitan Pizzeria!!!!  Hands down some of the best pizza I've had in a long time, and in a fun, family-friendly atmosphere.  Oh - and they are fast!  One of the best things about Neopolitan pizza is that the thin crust allows for a very quick cooking time, so we had to wait but a few minutes for everything to come out.
We started with the bietola marinata - an antipasti plate of roasted beets, pistachios, chevre, red onions, and red wine vinaigrette.

I am so making this at home the very next time I get beets.
Then we had the mista salad, which included mashed cannellini beans - what a tasty way to get some protein into a salad! 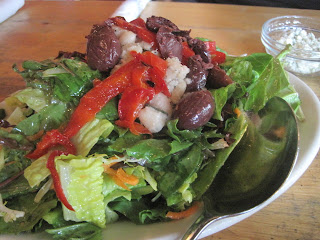 Only moments later, the pizzas came.  We got the Tutta Bella: 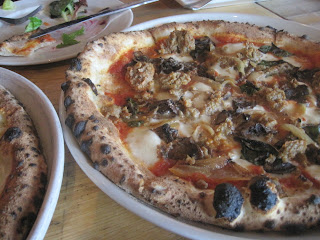 and the Prosciutto e Porcini: 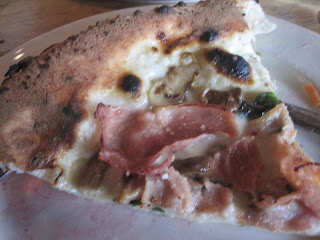 I'm not sure which one I liked better.  The mushrooms with the prosciutto were a wonderful contrast, but the little kick of the sausage was awesome, too!  My recommendation is to go with friends, get several pizzas to share, and then agonize over your favorite.
Dessert was simple - a scoop of gelato that was a perfect size to end the evening.
The Pacific Northwest has a great many places to eat, and these were only a few of them.  But if you haven't tried them, you are really missing out!
Posted by Allison