I once saw a documentary about dogs and how they differ from wolves.  Part of the show argued that because dogs have become dependent on humans, they give up on fairly simple tasks, while wolves would rather chew off a leg than ask for help.
Clearly, no one has informed Zooey of this canid helplessness. 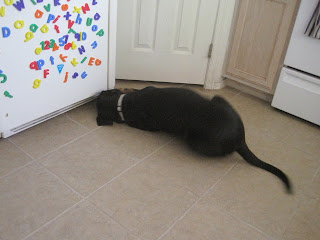 I took these pictures last week while I was making my pie for Pie Week.  I guess some small piece of mushroom or crumb of crust or flake of icing from HRH's birthday cupcakes managed to find its way under the fridge (Heaven only knows what compadres it found under there).
Zooey was hell bent on getting it. 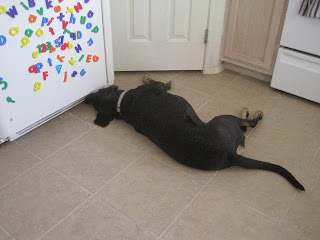 Of course, we can insert Einstein's definition of insanity here, although I'd like to think Zooey is just a bit special, not completely crazy (although you may want to check back with me on a morning after she trips me ten times during our run because she saw a bunny).
We could also insert a pun about how determined she was, but we don't need to go there.

We can also say that Zooey has some... (puts on sunglasses)... dogged determination. YEEEEEEAAAAAAHHHHHHHHHHHH! 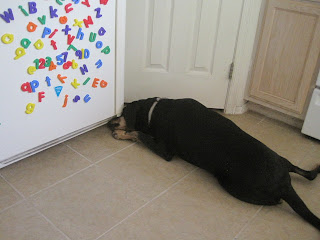 That same determination and attention that Zooey gave to the Mystery Snack Under the Fridge is actually, I think, pretty remarkable.  It required focus (or, as Scott likes to call it, "ignoring her people's commands") and, as far as her life goes, a fairly good time commitment that could have been spent napping or being loved on by the human occupants of the house.
I'd like to think that I'm getting better at approaching my own health with that same focus and determination.  Clearly I don't want to be as narrowly focused as Zooey here, but I have spent a good part of this year looking at what I can do to combat that mortal enemy, cancer.
Cancer runs in my family.  As you know by now, my dad had colon cancer.  His mom battled breast cancer before succumbing to ovarian cancer the year before I was born.  My dad's cousin is keeping up the fight against non-Hodgkin's lymphoma, while her son survived his own bout with colon cancer in his 30s.  My aunt (my dad's sister) just passed away after fighting both breast cancer and COPD; I am so thankful that I was able to reconnect with her before she passed.  I've had teachers, friends, and colleagues affected by cancer.  Some have been lucky.  Others have not.  It's a crapshoot, and I hate gambling. 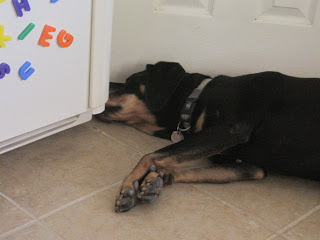 This week, I scheduled my first mammogram and my the consult appointment for my first colonoscopy.  I'm 33 years old.  For the record, that is 17 years earlier than the CDC's recommendation for initial colon cancer screening (for people with no family history), and 14 years before the age at which my dad was diagnosed with colon cancer.
I can't say I'm excited.  I don't know of many people whose faces light up at the prospect of drinking a liter of liquid laxative, being put under, and having their rear ends scoped out.  I mean, it makes for some pretty hilarious (if completely immature) jokes, but most people are still pretty squeamish about it.
My doctor insisted I get that process started - get baseline screenings - to make sure that I am not going to end up as a statistic - to be proactive instead of reactive.
I really do love my doctor for that.  It is really refreshing to hear a health care professional look at prevention instead of treatment.
Oh, also, my doctor knew Pat Tillman, so that just makes him even more awesome. 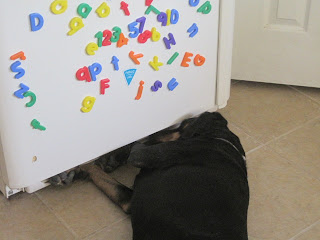 I hope that everyone who reads this post takes some time to consider their health history and what they can (and should) do to make sure they stay healthy and vital.
For my part, I've made some major adjustments to some habits:


In addition to those acts that I do, selfishly, for me (and my husband and daughter), I am channeling the grief I still feel at having lost my dad into what I feel are good acts.  My focus on donating blood and raising money for the Colon Cancer Alliance make me feel that my dad's death may mean that someone else can live.  Every pint of blood that I can give may help save that person who is hit in a car crash, and each dime I can send toward the CCA might mean we are one day closer to finding the cure for that damn disease.
Then I can stop writing these posts and start writing about unicorns and glitter and stuff.

There's that joke that some people start to look like their dogs.
In this case, I don't mind if, in some small way, I behave like mine.
Posted by Allison