A Man and His (Smoked) Nuts

WARNING - this post shows just how immature I am.  Continue at your own risk for extremely tacky jokes that are likely best appreciated by 12 year old boys.

Since getting his smoker (which I've named Bogey), Scott has been looking for new and interesting foodstuffs to to smoke.  We've had ribs, chicken, turkey legs, and more.  Basically, if it's dead and available at our local grocery store, Scott will try to smoke the bejeezuz out of it.  I think we are now officially in charge of making a pulled pork for Easter dinner with the family.
So it didn't surprise me in the slightest when he told me that he subscribed to some e-newsletter that was dedicated to all things related to smoking (at least it's more productive than Mafia Wars, right?).  I've already stated that I will not eat anything that originally came from the sea - smoked fish is a bit too much for me.  But I'm willing to entertain other ideas, especially meatless options, since I am trying to eat less of the stuff in the first place. 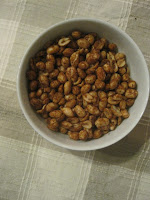 Well, apparently, you can smoke nuts.
(I totally tried to type that with a straight face, but I confess I didn't manage it)
This isn't earth shattering news to me, and I'm sure it's not to you, either.  During my tenure on the grand jury, I helped our group consume at least 3 Costco-sized containers of the Blue Diamond® Smokehouse almonds.  I had to request on many days for them to stay on the opposite side of the room for fear that I'd just start eating them straight from the jar.  So I was kind of excited when Scott decided to take on this challenge.
Of course, almonds would be my choice, but Scott also picked up some peanuts (both raw) to experiment with.

First, he made a brine (HRH thought he was making tea, so she wanted to help; it's not that my husband has outrageously tiny hands or something) out of water, salt, and the same rub that he uses on his pulled pork. 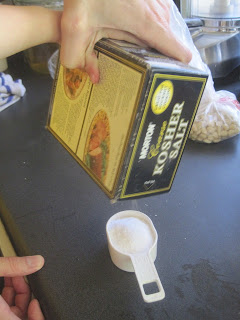 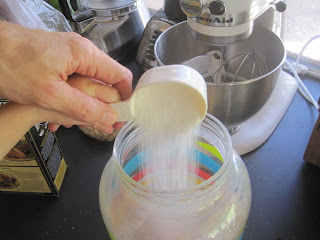 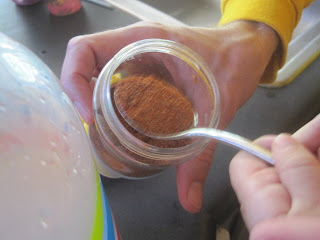 Then the nuts had to soak (snicker) for about 3 hours in said brine.
After their bath, Scott took the nuts and tossed them (bahahahaha!) in some olive oil and more of that rub, which he ran through the spice grinder to make it even more of a powder.  I apologize that I don't have a picture of the post-oiling - someone wasn't very good about notifying me when he was doing something, so I missed a lot of photo opportunities. 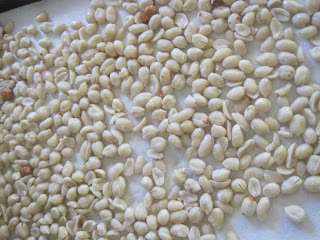 Into the smoker they went - two hours with full smoke, and then about three more with just heat.  This is known in our house as the "sit and watch some football and wait while checking periodically to make sure nothing is burning" period. 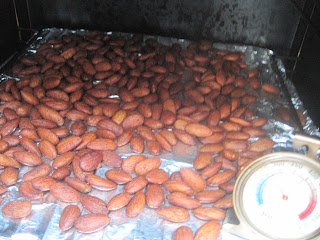 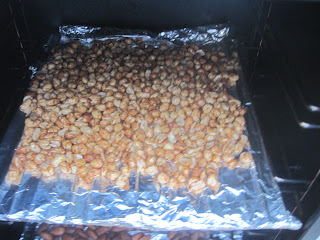 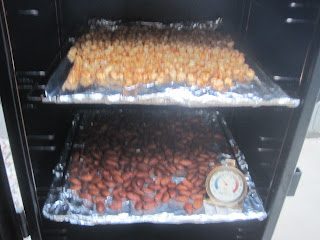 I admit that I had a little too much fun asking Scott, "Are you checking your nuts?" or "How are your nuts doing?" every time he got up to tend to the smoker.  Even HRH got in on the fun (even though she is way too young to get why I was laughing so hard), asking, "Daddy, where are your nuts?"
If my husband can start DVRing the new episodes of Beavis and Butthead, I think I can at least make a few tacky jokes.
The end result wasn't the same as the traditional smoked almonds that you can get at the store, although I'm hoping Scott will try that recipe, too, once he gets the procedure hammered down to his liking.  The peanuts definitely picked up more smoke flavor than the almonds, which we think were left in a wee bit too long.  Along with that smoke flavor was the flavor of the rub, which includes garlic, paprika, chile powder, and a few more ingredients that I don't know. 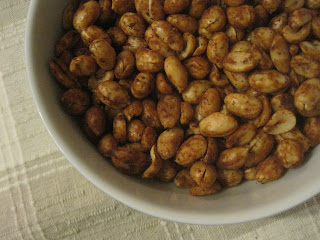 I think that these are going to be a great snack item for those fall weekends, especially paired with a tasty beer and some college football (I refuse to watch the NFL for various reasons).  I'm looking forward to larger batches so I don't feel bad for horking them all down before I even reach the living room.
Now, if you'll excuse me, I have to go tell my husband I just wrote a blog post dedicated to his nuts.
Posted by Allison