After a week of bombings in Boston, ricin in Senatorial and Presidential mail, an explosion in Texas, an earthquake in China, and an avalanche in Colorado, the country collectively needs Something Good to hold onto.  My heart has been especially leaden in these last seven days.
Three of these tragedies were either accidents or acts of nature, although this doesn't help make the loss of lives any easier.  Yes, I know people are already trying to argue carelessness in West, but it was still an accident, occurring without malice.  But the bombings in Boston, which took four lives, and the ricin sent to the White House, were done on purpose.  By people who wanted to cause suffering, pain, and even death.  I cannot fathom this.  I don't understand a degree of hatred and unhappiness so great that one would be willing to take another's life.  Yes, violence has been part of humanity since its emergence onto this planet.  But I don't think I'll ever get used to the intimacy that some people have with invoking Death for others.
That in Boston those who died were spectators makes the events of the marathon so much worse, in my mind.  Running is a sport that doesn't even seem to surround itself with "fans."  Even if you're not a basketball fan, you know who Michael Jordan and Lebron James are.  Few people don't know of Derek Jeter.  But ask your average "man on the street" who Meb Keflezighi or Kara Goucher, you'll probably get a blank stare.  While other sports' athletes that take place in smaller, closed in venues show their appreciation to those who pay top dollar to see them play, it seems that the appreciation runners have for those who come out to cheer is in a special class of honor.  And these were the people who were hurt, the people who lost their precious lives.  These people who came to cheer on their friends, their parents, their town.  The streets of Heaven are truly too crowded with angels this week.
Bad news seems to be all around us; it's almost the norm of late.  Even locally, we have the privilege of the media spotlight being on the trial of a woman who is accused of killing the man who jilted her (how this case has become the newest national trial is beyond me, but I have no desire to find out what intrigues so many) and a litany of drive by shootings.  It's easy to start to think that because the reporting of such sad news is the norm, it's also the norm of society to lean toward those violent, inhumane tendencies.
His Holiness the 14th Dalai Lama disagrees: "...love and compassion predominate in the world.  And this is why unpleasant events are news, compassionate activities are so much a part of daily life that they are taken for granted and, therefore, largely ignored."
It is my hope that we can stop taking the compassionate activities for granted but still make them that seamless, integral part of our everyday lives.  Maybe that's the key to see the bad news, even if it's not the norm, fade away from our nightly newscasts.
This evening then, I, like many other runners throughout the Valley and country, took a run to honor the people of Boston and to DO Something Good for others, for the running community, and for ourselves.  There were at least six runs in the Metro area, and while I had originally planned to head closer to downtown Phoenix, since The Husband was working late, HRH and I stayed close to home, heading out to Sole Sports in Tempe, where I get all my shoes and most of my gear.
It was truly lovely to see so many people at all different levels of running ability come out, most of them in varying shades of yellow and blue.  There were a handful of dogs (we opted to keep Zooey at home) and plenty of kids, although most of them were either stroller age or old enough to run at least two miles without frequent water breaks.  There was a general air of camaraderie  as people chatted with friends and strangers alike before we all headed out, and HRH found a little girl about her age to run around with. 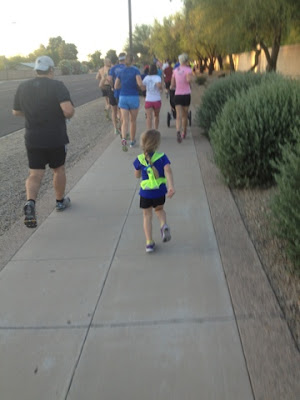 She loved it.
Until she face planted and scraped the heck out of her knee.

In my attempt to help her feel better, I told her that Kat had also gotten an "owie" last year during her training and was able to run again.  Let's not split hairs about the fact that a scrape on the knee and tendinitis are not in the same ballpark - an owie is an owie is an owie, when you are four.  Slightly inspired, she asked me to take this snap to send to "Miss Kat." 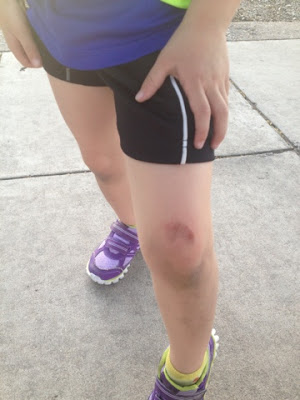 To subsequently learn that Kat ALSO has purple shoes ("we are basically twins") was enough to perk her up in time to get some homemade frozen yogurt (really frozen bananas and strawberries with a few chocolate chips) for "dinner."
She's pretty much a Kat protege.

So, HRH had her first DNF.
But in this fall, which brought nearly instant tears, I worked to help her learn a valuable lesson that we as a country and world had to be reminded of this week: it's important to get up and keep going, to not allow it to stop her from going forward.
Because without those who went forward this last week, the numbers, horrific even at one, could have been much higher.  I shudder to think of what may have transpired without those who didn't run toward the sights that we would instinctively run away from.  Most of those who died in West were those who had responded to the fire that subsequently caused the explosion.  There were runners in Boston who ripped out the IVs that were rehydrating them in order to make room for those who had lost limbs.  We'd all like to think we would do the same thing, but we never know until we are faced with running toward or running away.
Tonight, I hope that by honoring the people of Boston, my daughter will always be one of those who run toward.

If you are able, you can help by making donations to:
Together, we can stop taking those compassionate acts for granted and start keeping them front and center.
Posted by Decadent Philistines