This month I was able to hop back on the book club train that's hosted by Jamie at From Couch to Ironwoman.  I was riveted by the first read, so I was really looking forward to this month's selection, The Long Run, by FDNY firefighter Matt Long. 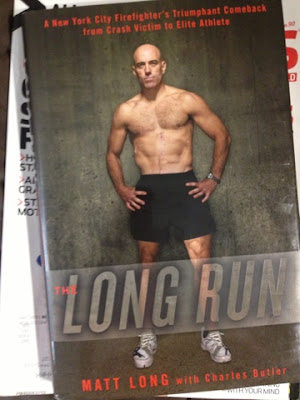 I was even more excited when I snagged a hard cover copy of the book for mere dollars at my Changing Hands.  I had taken HRH to get a new book (her selection was Llama Llama Red Pajama), and on a whim, I checked out the sports section and found my little treasure.

If you're interested in joining Jamie's book club, go here and sign up.  Even if you, like me, can't make every month, I know you'll find new inspiration with every read.
Posted by Decadent Philistines