Ever since I made that batch of lemon marshmallows back in February, I've been obsessed with them.  I mean, OBSESSED.  I can't stop thinking of fun, delicious flavors to try out.  So far, I've also managed to make:
The rest of my list will keep me playing with corn syrup and gelatin for the next two years at least.  So you should probably go out and buy stock in said corn syrup and gelatin now before the share price quadruples.
It shouldn't really come as a surprise, then, that this round of Theme Weavers shenanigans sees me adding raspberry marshmallows to the list.  Happy Berry Week, everyone! 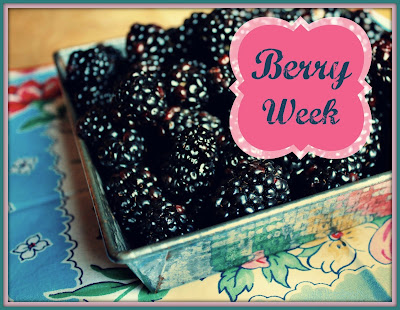 Truthfully, marshmallows are not difficult to make.  They require sugar, heat, a candy thermometer, and a little patience.  And a spouse who doesn't mind that your kitchen is a cloud of powdered sugar for about 24 hours.  Once you get the procedure down, then it's a matter of experimenting with those different flavors.  As you may guess, I'm not a fan of adding artificial flavors to my foods, so if I'm going to make a flavored marshmallow, that flavor needs to come from The Real Deal.
The two traditional ways to have mallows are, of course, the s'more and atop hot cocoa.  While the former is a fantastic summer - and year-round - treat, just the thought of hot cocoa at this time of year makes me want to melt.  The good news is that The Internet has a summery option that was the inspiration for the milkshake below.
I hope that you decide to try your own hand at marshmallows; you'll see not only how easy they are but also how much more tasty than their factory-made counterparts.

Raspberry Marshmallows
adapted from the wonderful Jenni at Pastry Chef Online
Pulverize the freeze dried raspberries using a spice grinder (our coffee grinder has been appropriated for this purpose).  Add the powder to a 1-1 mixture of the powdered sugar and corn starch; this will be your coating for the mallows.  I usually use about a cup of each, but I also tend to be coating-happy, hence the aforementioned 24-hour powdered sugar cloud. 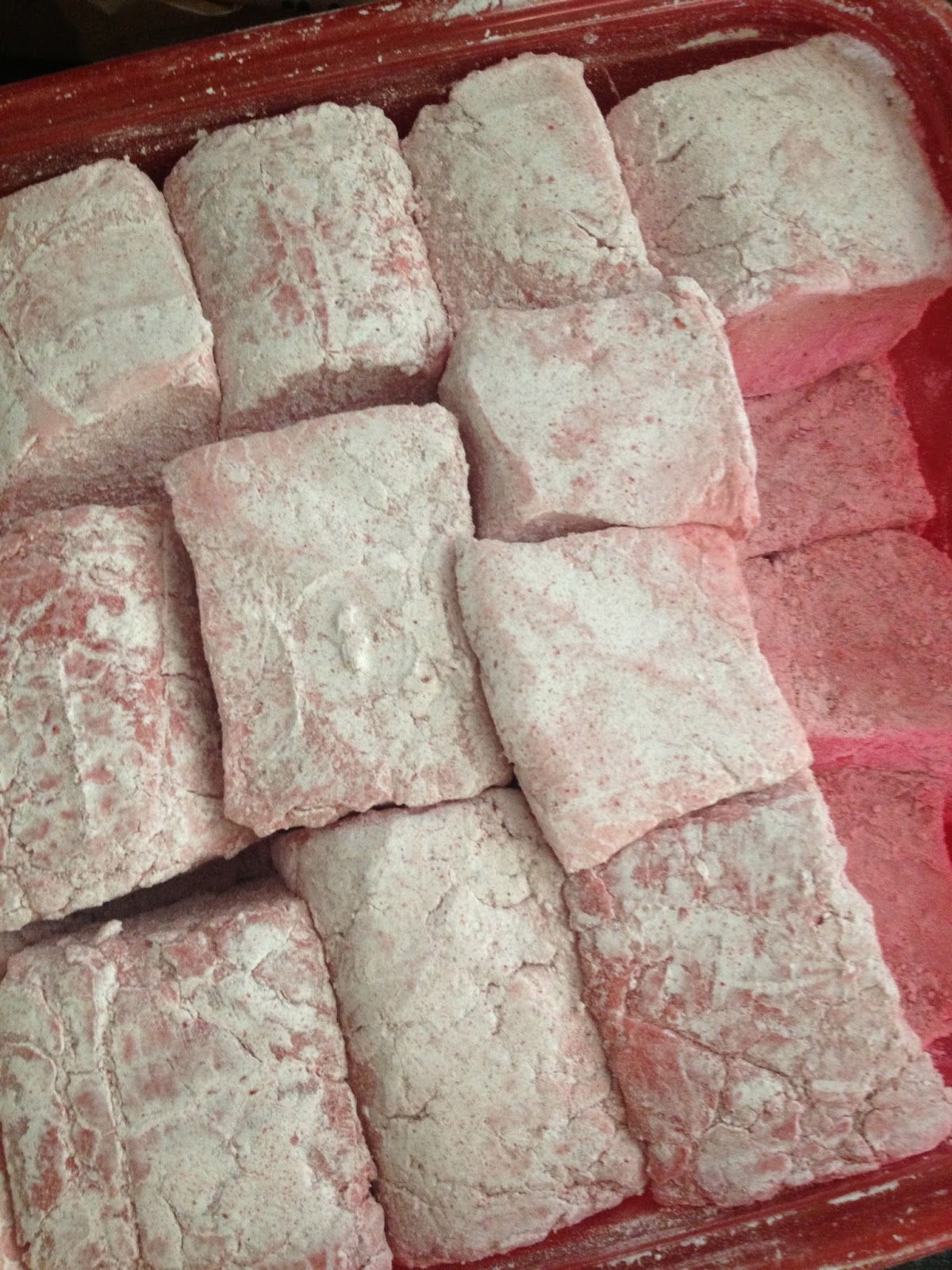 Add the puree to the bowl of your mixer.  Bloom the gelatin by combining with with the puree, salt, and vanilla.  Make sure there aren't any chunks or clumps.
Spray a 9x13 pan with pan spray or olive oil (I like to use my Misto for this).  Make sure every inch is lubed up.
Line pan with plastic wrap.  Make sure that it's firmly pressed down and that there are no bubbles.  Spray/oil the now plastic-wrapped pan again.  This might seem like a weird step.  Trust me; there's a reason.  You're not just spraying an aerosol can for a contact high giggles.  Dust the bottom and sides of the pan with the raspberry powder-cornstarch-powdered sugar coating mixture using a fine mesh strainer or sieve.  Make sure you can't see the plastic wrap through the coating.
Set the pan aside, and turn your attention to the stove top.  In a large-ish, heavy sauce pan, combine the sugar and the syrups as well as a splash of water.  Bring the mixture to a boil.  Cover the pan and allow to boil, undisturbed, for about 3 minutes.  Then, uncover it and monitor the temperature.  You need the sugar to heat to the soft/firm ball stage - above 235° F but not over 244°F.  Jenni suggests the higher temp, but don't let it get any hotter, or else you'll have to start over.  That would suck.
When the temperature reaches 240°, turn your mixer on to low or medium low; you'll need to use the whip attachment.  Because you're gonna whip it good.  Actually, you're going to whip it well, but I guess proper adverbs don't sell records.
Once the sugar-syrup mixture has reached 244°,  remove it from the heat and pour directly into the mixing bowl.  Be careful; this is hot (duh), so the speed should be low enough that nothing splashes out and burns you like that acid burned Harvey Dent in the second Christian Bale Batman movie.
Once you've added it all, turn up the speed to medium and allow to whip (good/well) for a few minutes before really cranking it up to top speed.  Now whip it into shape; shape it up - get straight.


I cannot discourage you from playing this while whipping the mallows into shape - in fact, I whole-heartedly encourage it, as I do singing along to it at the top of your lungs.  I'm pretty sure it helps the process.
But I digress.
You'll know you're done whipping when the mixture is about tripled in volume and it begins to pull away from the sides of the bowl in slender, delicious threads.
Turn off the mixer, and pour the mixture into your prepared pan.  A very large rubber spatula, liberally coated with olive oil is helpful to get the remnants from the bowl to the pan.  The marshmallow cream should completely fill the pan.  Spray the top of the cream to smooth it out.
Sift the coating over the entire top of the pan, making sure that none of the shiny marshmallow surface shows through.
Now here's the really hard part.  Set the uncovered pan aside for several hours so that the marshmallows can set.  I like to make them in the evening so that they can set up overnight, and then I can have marshmallows for breakfast finish the process in the morning.  I also like to keep them in the microwave, but that's really because it doubles as a coonhound-proof food storage device.  Zooey doesn't understand that the marshmallows aren't for her.
Once the marshmallows are set, you can cut them into squares.  Giant, fluffy squares of deliciousness.  I've tried a pizza cutter, kitchen shears, and a serrated bread knife.  What works best for me is the knife. Now here's why the plastic wrap layer in the pan is so key.  To remove them from the pan, turn the pan upside down on a large cutting board, and then flip it over.  Then remove the plastic wrap, and voilà!  Your marshmallows are naked and ready for cutting.
Toss the marshmallow squares (or, if you so wish, liberally oil a shaped cookie cutter and make fun-shaped mallows) into the coating mix before storing in an air-tight container for up to two weeks.  However, if you make one of the two goodies below, they might not last 2 days.

Notes:
1) While fresh raspberries would be awesome, I prefer to use frozen organic ones.  Thaw them out and puree them, with the juice.  You may need to add a bit of water as well; you don't want it to be too thick.  If you have leftover puree, it's really fantastic on top of ice cream or in a salad dressing.  Or just chugged from the blender cup.  I've heard.
2) For raspberry syrup, you could make a simple syrup infused with raspberries or make a reduction of some raspberry juice (or all natural cran-raspberry juice, if you can't find just raspberry juice).  It's up to you.  For these mallows, I went with the latter, simply for convenience purposes (we had cran-raspberry juice in the refrigerator).

Of course, homemade marshmallows are fine on their own as a complete meal snack.  But they are made even more heavenly when combined with other wonderful goodies, like these s'mores and milkshake.  The s'mores aren't really a "recipe" - most people know how to make s'mores (except for that one crazy woman on that Jeff Foxworthy baking show who didn't even KNOW what a s'more was - WHAT?), so I've basically explained the assembly steps (although that is probably obvious from the photos, huh?).  The milkshake is, in a word, brilliant.  If you use enough of the mallows, you'll really be amazed at how the toasted flavor comes out.  And since I can't wait until winter comes to enjoy a beverage with mallows floating on top of them, this is the perfect way to stay cool and get my cocoa fix. 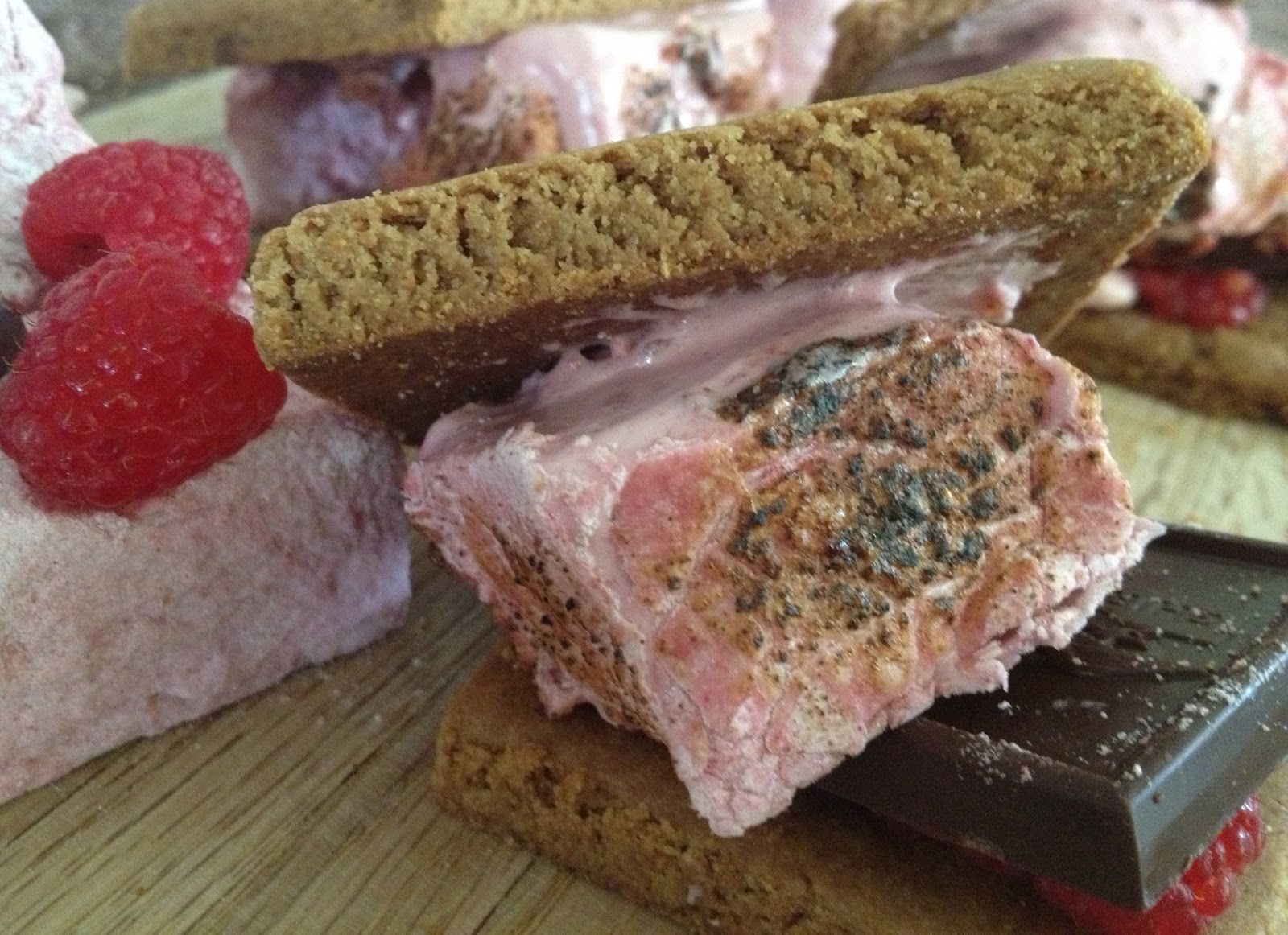 Place 2-3 fresh, organic raspberries on top of a graham cracker.  And by the way, since you made your own marshmallows here, you might as well make some homemade graham crackers.  Too hard, you say? Well, if you can make a pie crust or a chocolate chip cookie, you can make graham crackers.  Try Jenni's graham cracker recipe.  I did, and I regret nothing.
On top of the raspberries, place a Ghirardelli dark chocolate and raspberry square (if you really don't like dark chocolate, you can use the milk chocolate version, but since dark chocolate has nutritional benefits, and we're using fresh fruit and a whole wheat flour-based graham cracker, basically I'm telling you that this is a health food).  Have another graham cracker at the ready.
Toast your marshmallow.  You could do this in the broiler if you wanted to, but homemade mallows have a lower melting point, so we usually bust out the crème brûlée torch.  Plus, Husband likes to set things on fire with the torch, so this is a fun activity for the whole family.  If you DO use the broiler, do NOT walk away; watch the mallows carefully.  Place your toasted mallow on top of the chocolate immediately, and add your top graham cracker.  Smoosh down, being careful of gooey deliciousness that will attempt to escape the confines of the cracker.  Devour.  Repeat as needed.
You may notice that in these photos, the top graham cracker is falling off the s'more.  It's true.  These guys are so big that you're going to need to unhinge your jaw and inhale them like a python, but in truth, you're going to make a mess of yourself regardless of how daintily you may try to enjoy a s'more.  Embrace the mess, people.  Just make sure you have some wet wipes at the ready before you do any of this.  Also a glass of water.  Maybe just sit outside and have the hose ready for when you're done.  Whatever.  It's summer, right? 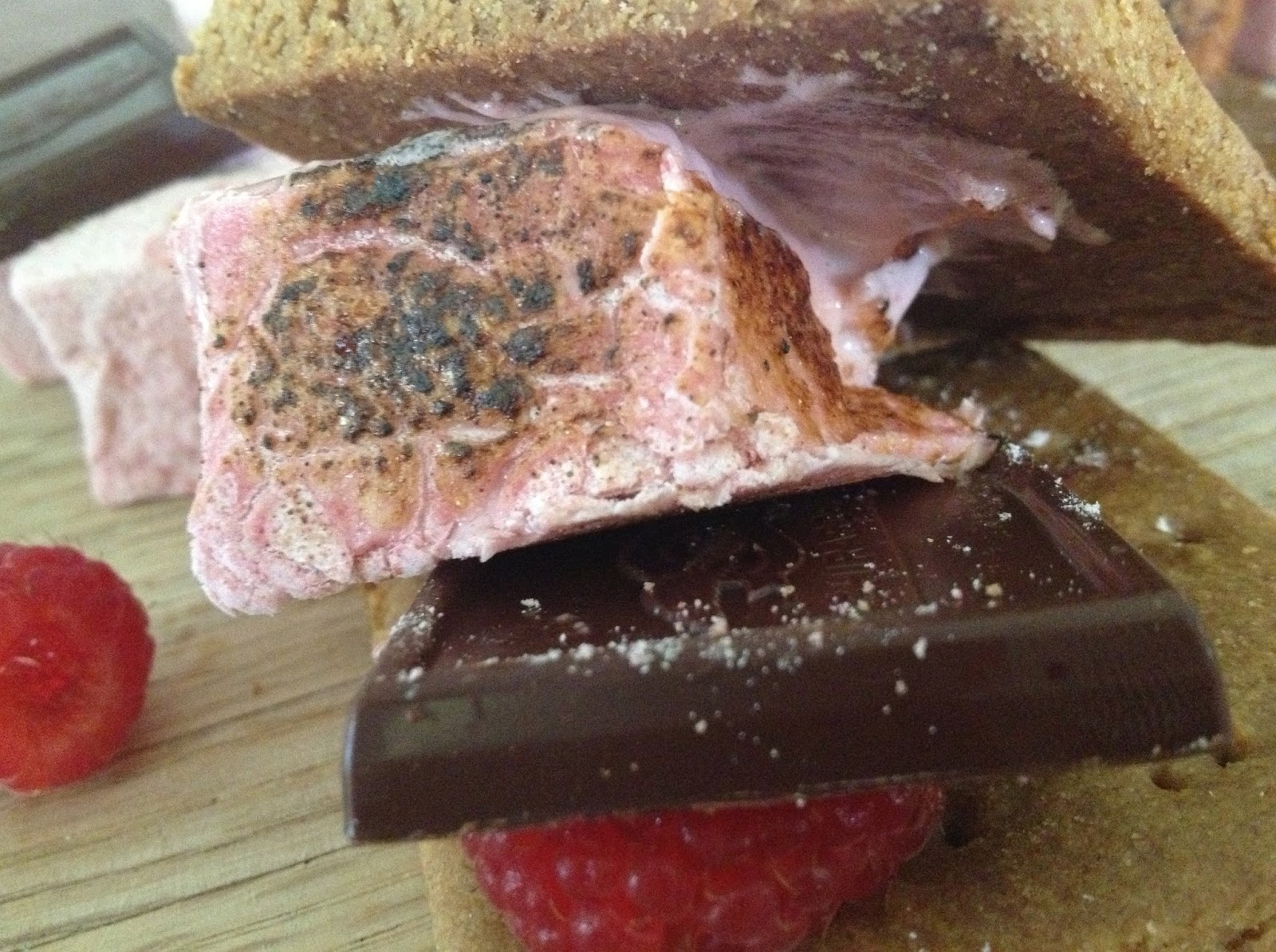 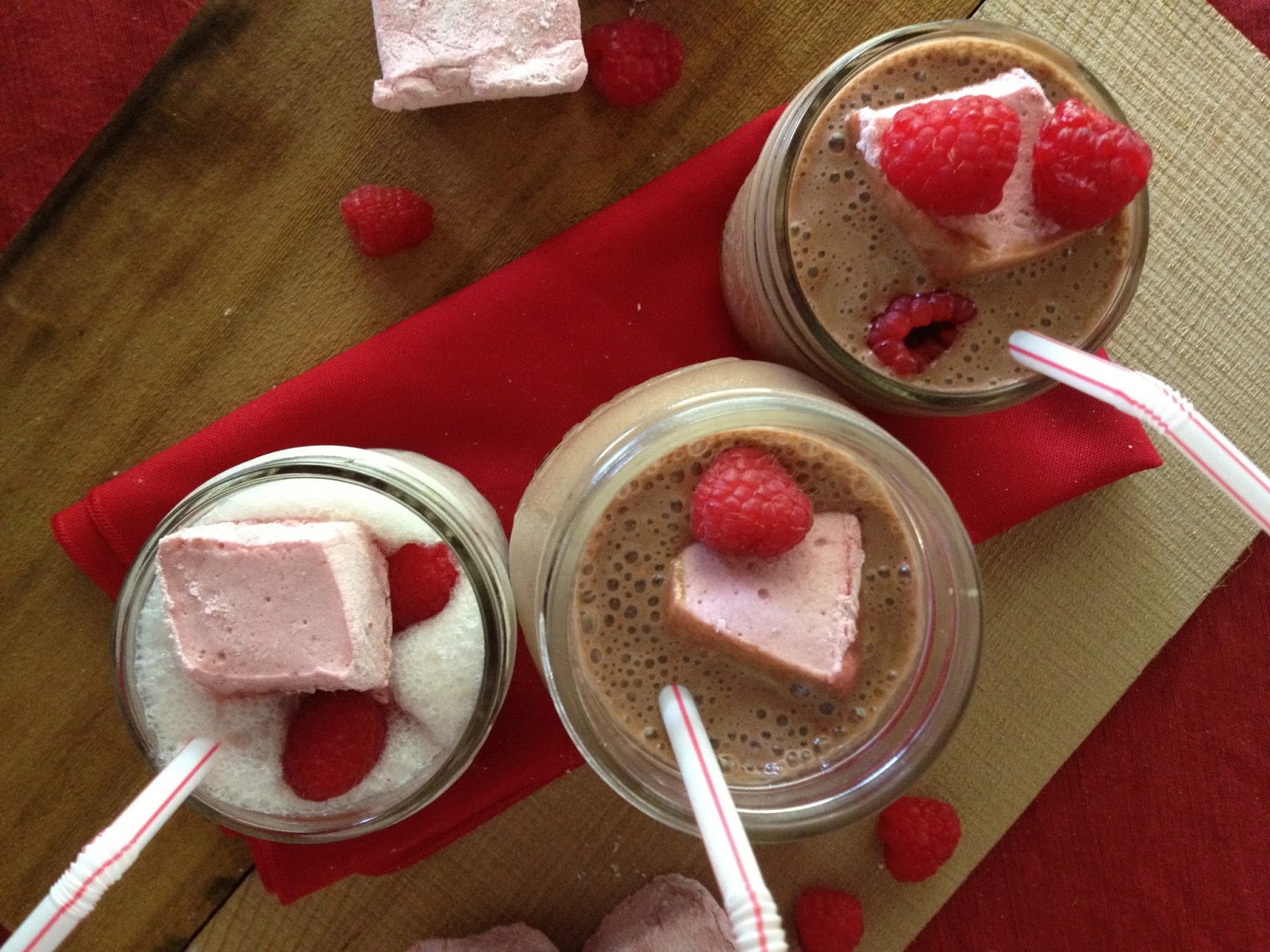 Toast the marshmallows (see the comment above about the lower melting point of homemade mallows).
Toss the toasted marshmallows, vanilla, ice cream, and milk into the blender and mix until the marshmallows are fully incorporated.  Pour into glasses and garnish with the raspberries and remaining marshmallows.  Drink immediately.
These would also not suck with a shot of Chambord or Godiva liqueur.  I'm guessing.  I don't know.  It's just a hunch, which you may or may not want to test for the purposes of science.  Just remember to drink responsibly if you choose to take this route.

*Another delightful ice cream flavor that you can use is a white chocolate raspberry, for (hopefully) obvious reasons.  Vanilla would also work well in a pinch; after all that's what the original recipe calls for. 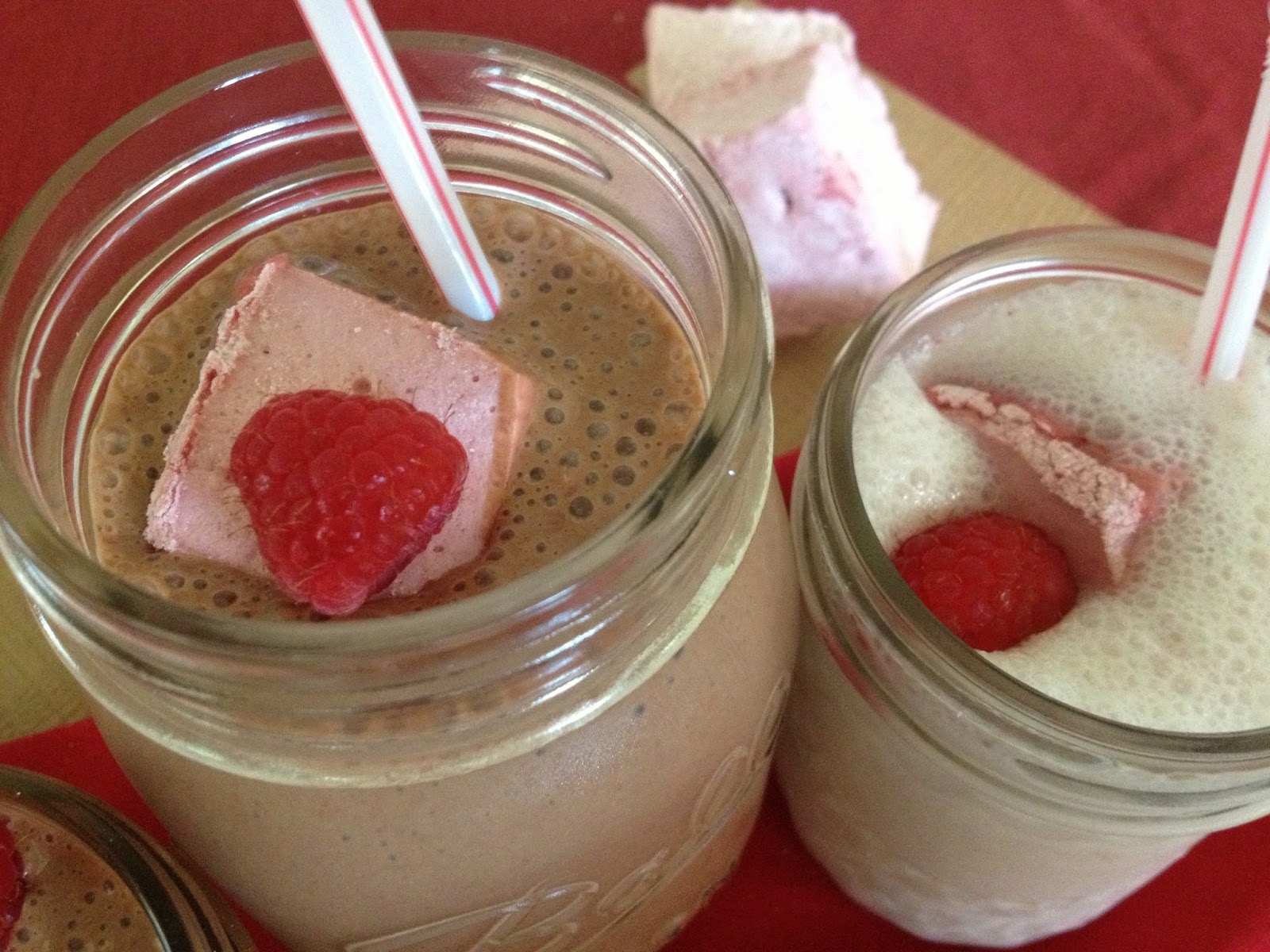 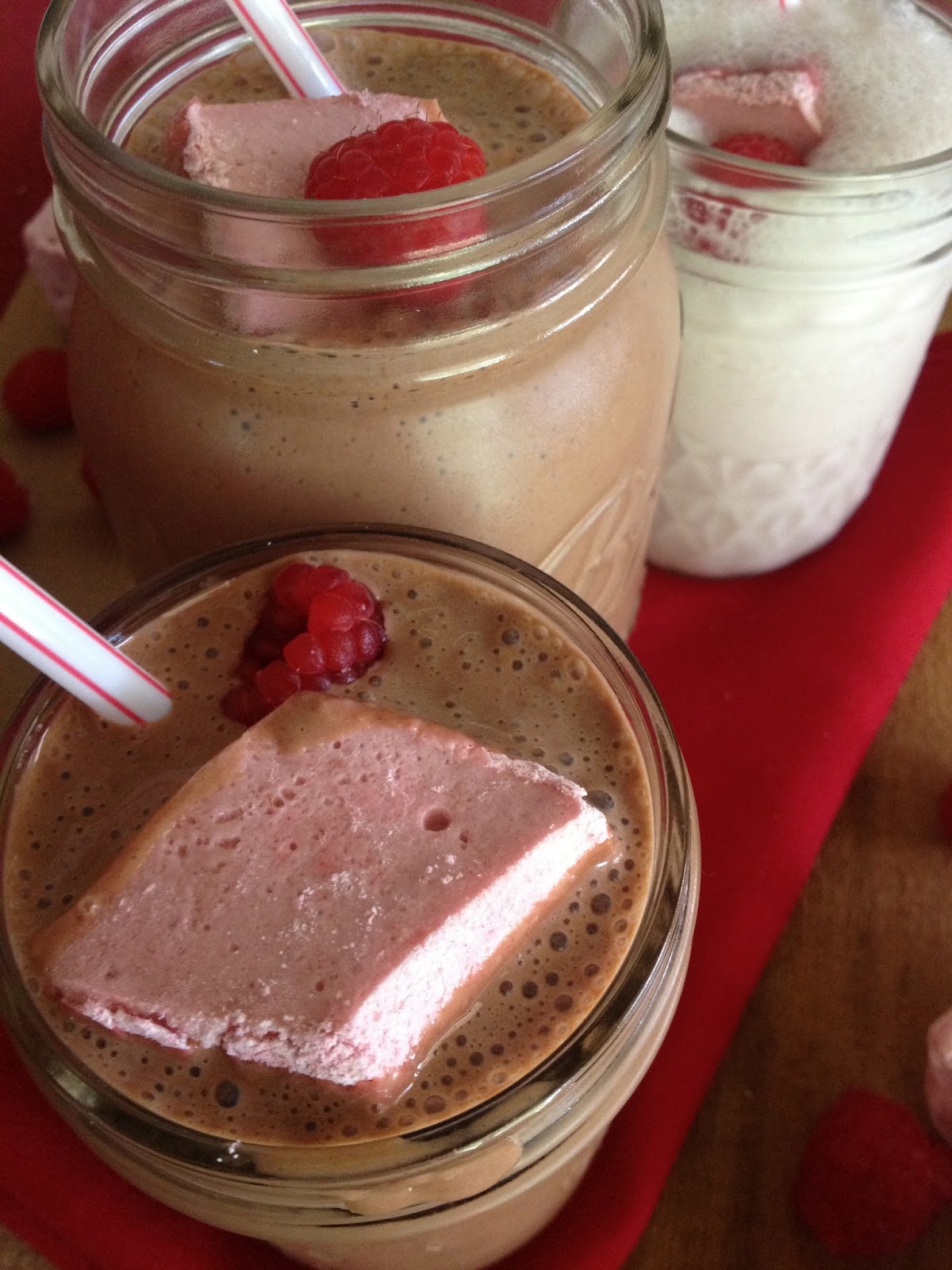 Thanks for sharing Berry Week with us.  If you haven't had the chance yet, please check out the other incredible berry recipes from the other Theme Weavers:
Now, before you go, tell me - what flavor of marshmallow would YOU like to snack on?
Posted by Allison