The first time I had horchata, I was teaching at one of the Catholic schools in downtown Phoenix. My students couldn't believe that I'd lived in Arizona for so many years without having had it, although my previous life in Washington gave me a pass for my first 18 years of life. So one morning, a student braved a uniform summons to bring me freshly made horchata.
It was one of those life-changing moments.
Since then, I had rarely found a place that had GOOD horchata.
It's amazing how one, life-changing experience can make an Anglo so picky about a Latin American drink, really.
So you can imagine my delight when, upon arrival to our OKMH weekend in Houston, Jeanne's Husband, The Complete Package (TCP), had made horchata to go along with the Mexican feast that we devoured.
Even though there were seven of us, we tried to drink it sparingly to make it last.
Then, Sunday morning, I couldn't stand it anymore.
"I'm putting horchata in my coffee."
And that was that.
Horchata has been constantly on my mind ever since I got back from Houston. There are certainly places here that make good horchata, but whenever we go out, I usually stay in my "safe" zone (read: iced tea and/or beer) for choice beverages.
And since it's getting hot, a milk-based drink doesn't always sound the most refreshing.
But you know what does?
Ice cream.
The OKMH girls and I have enjoyed doing our theme weeks, and an Ice Cream Week was on deck for….some day.  I'm not sure how the discussion began, but we latched on to the idea of having marshmallows in our ice cream and bringing Jenni from Pastry Chef Online, who is not only a magician when it comes to sweet treats but has also recently begun a weekly ice cream posting on her blog.
Kirsten promptly took the idea to Jenni, who thought it was a whiz bang idea. She brought in many more friends who love ice cream and marshmallows, and voilà - here we are. 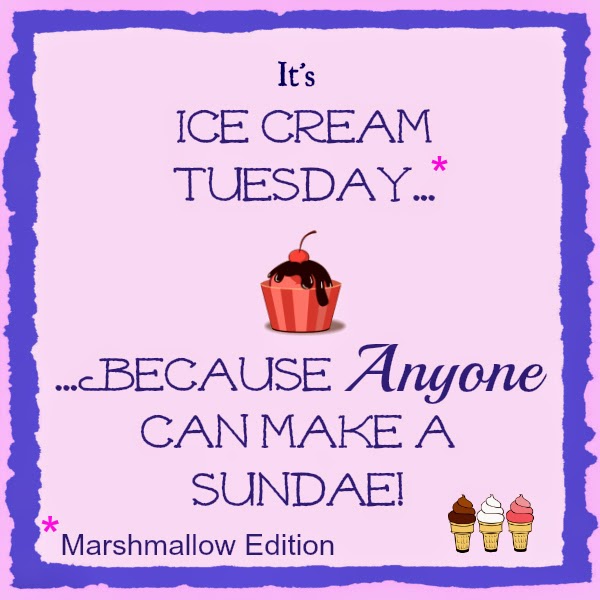 Now, since horchata goes so well with coffee, it was clear that a coffee marshmallow creme was the perfect pairing for this Ice Cream Tuesday.
I'll be honest with you, though. This recipe nearly didn't happen. The date snuck up on me, as I'm wrapping up my school year with my own students and only recently submitted my own final exams.  Then there were the Mallow Disasters. DisasterS - as in more than one. Disaster One was a marshmallow creme that fell. Disaster Two was a batch of marshmallows that…I don't even know how to describe the utter failure of it, really. But for the record, marshmallows can separate, and it's neither pretty nor tasty.
Thankfully, Kirsten saved the day (again). She reminded me that she has a marshmallow creme recipe and that I need to actually refrigerate homemade mallow creme so it doesn't fall apart, so Attempt Number Three went According to Plan. 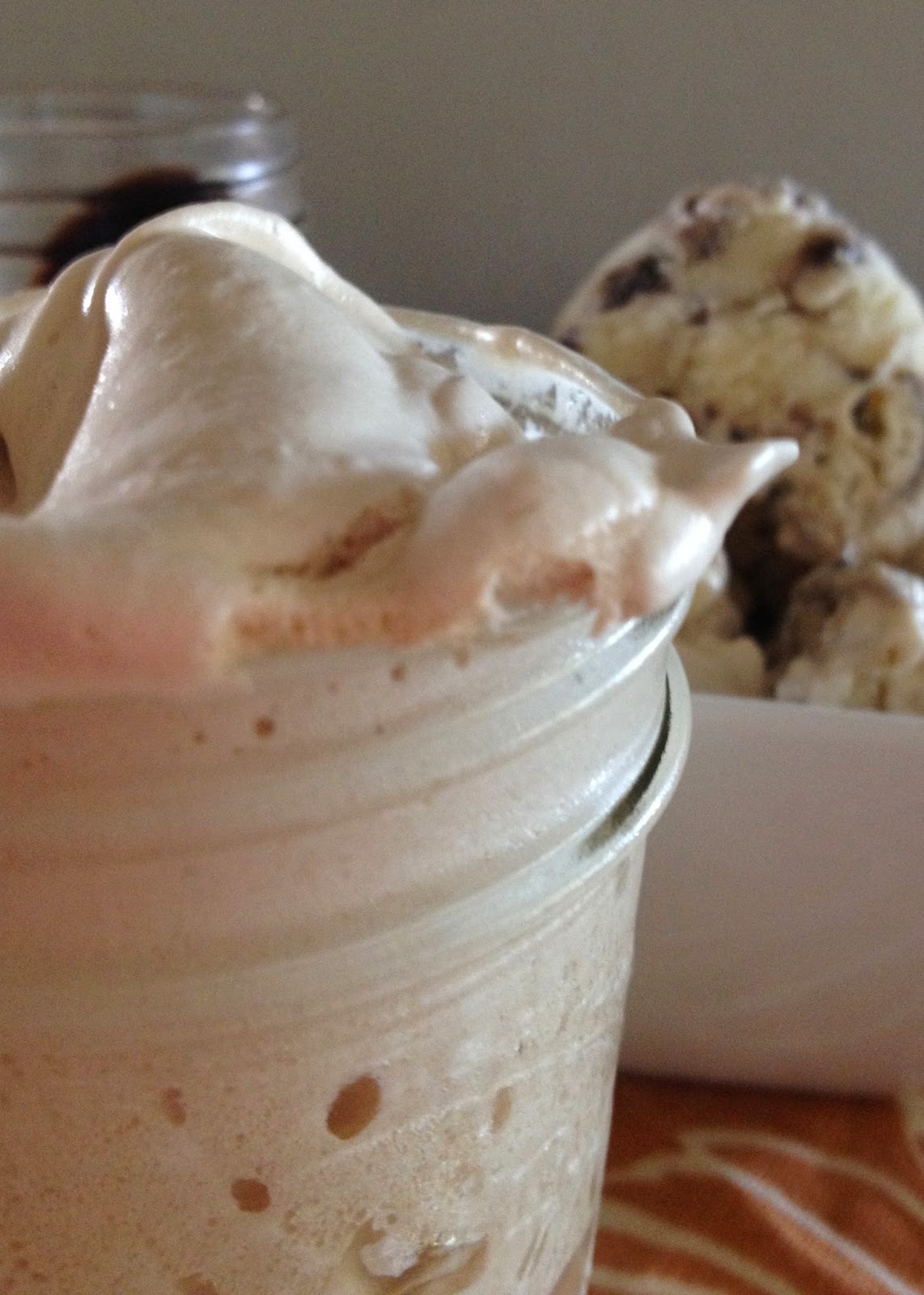 Between Disaster Two and Attempt Three, I decided that the color was going to be a bit lacking, as the ice cream and mallows/mallow creme were basically the same tan color, so I found a homemade chocolate syrup recipe to which I added coffee. 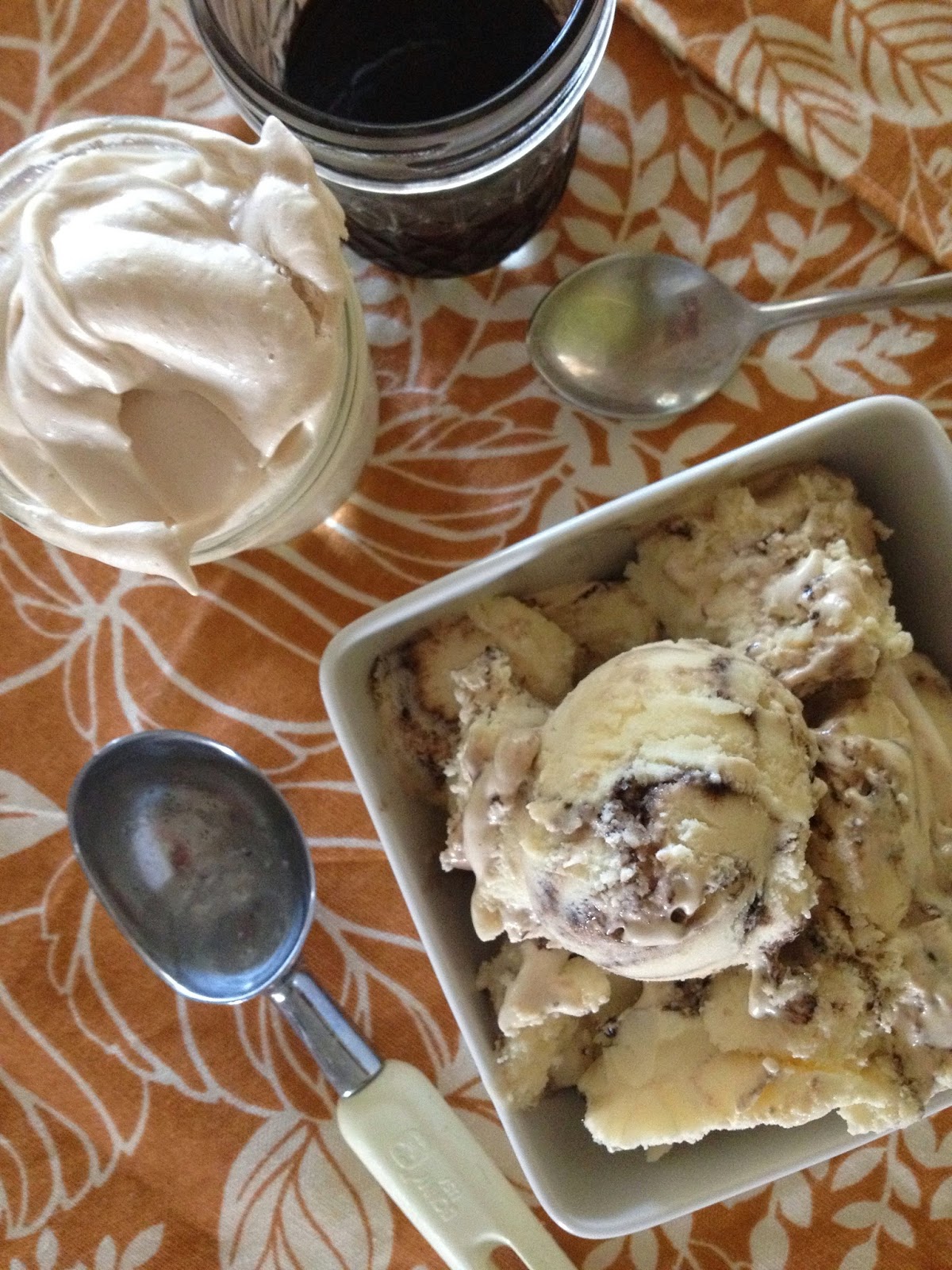 The end result was perfect. While the horchata is sweet, it's not overly sweet, so the addition of the mallow creme and mocha syrup adds just enough sweetness to make it toothsome without making it also tooth-decaying. 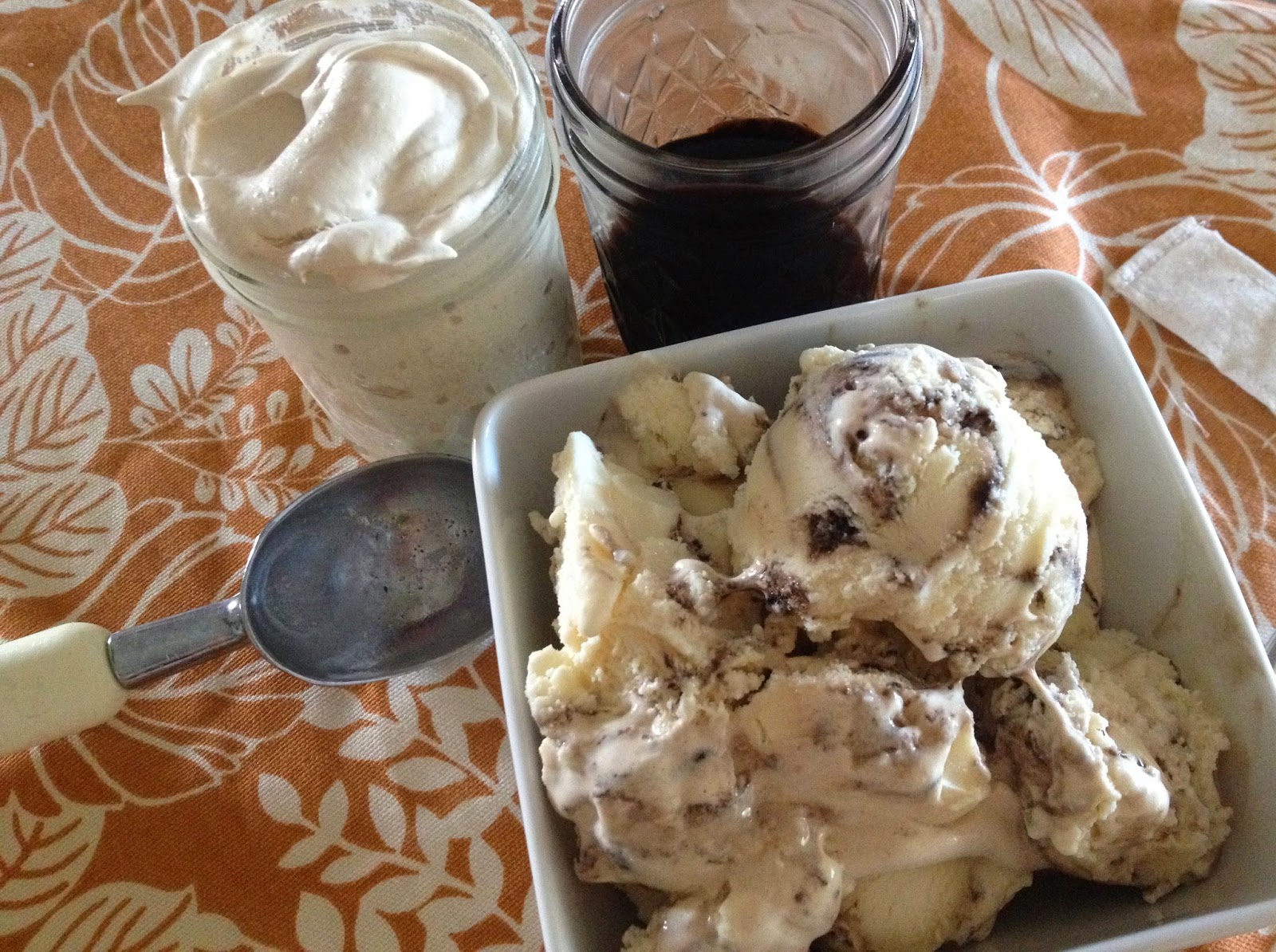 For the Ice Cream:


For the Mocha Syrup:
I used this recipe from Kitchen Treaty for chocolate syrup but used dark cocoa powder (Hershey's makes a Special Dark that I like) and two packets of Starbucks Via instant coffee powder (French roast) in my measurement for the cocoa powder. You can make this in advance and stir it into just about everything you can imagine, but make sure you leave some for the ice cream.

For the Ice Cream:
Note - horchata takes some time to prepare, so if you want to have this ice cream ready for Saturday evening, start the horchata process Wednesday or Thursday, and make the ice cream base Friday. It's a long wait but not very time consuming (lots of "chill overnight" steps), but it's so worth it.
In large pot, combine 1 quart horchata, salt, egg yolks, and cornstarch. Bring to a boil, whisking constantly.
*If you would prefer a sweeter end result, you could add 1/4-1/3 cup brown sugar, but really, I don't think it's necessary once everything is put together
Boil for ten seconds, and then immediately strain through a fine mesh sieve into a large bowl.
Add the remaining 2 cups horchata, which you can just bring right out of the fridge when you need it. Whisk to combine completely.
Cool over an ice bath (I use a larger bowl filled with ice water), and then cover and transfer to the refrigerator to cool overnight. If you don't have a ton of horizontal room in your fridge for the bowl, use two quart jars.
Once completely cooled, add to your ice cream maker and churn according to directions.
**Horchata is made with different kinds of milk, so this ice cream won't be as thick and creamy as other ice creams that are made with half and half or heavy cream (although that's not to say that it's not at all creamy). If you plan to make it only for ice cream purposes, you may want to use half and half instead of the whole milk in TCP's recipe, but I'm not sure I want to drink it that way; it's thick enough as a beverage. You could also use half-horchata, half cream for the custard mixture, although that would make the horchata flavor a bit more subtle (which I guess would be OK). Since it will have a lower fat content than most ice creams, it will freeze a little harder. That's not a big deal here in Arizona, but you may want to take some measures to ensure a more scoopable texture in your area.

For the Marshmallow Creme:
I used Kirsten's marshmallow creme recipe, adding one packet of the Starbucks Via instant coffee powder to the egg whites.
I highly recommend making this while the ice cream is churning, as you'll have plenty of time, and you can begin to assemble immediately after the creme is finished.

To Assemble:
Once the ice cream is at a soft serve consistency, drizzle a few tablespoons of the mocha syrup onto the bottom of a freezer-safe container. Add a few dollops of the mallow creme (I suppose you could use a piping bag, but I'd already made enough of a mess). Cover with ice cream. Repeat the process until you've used up all the ice cream. Press down plastic wrap onto the ice cream, cover with the lid, and freeze for at least 6 hours.

To Serve:
Now, you could sneak a few spoonfuls of this ice cream straight from the freezer (What? Like that's NEVER occurred to you….), and that would be delicious. 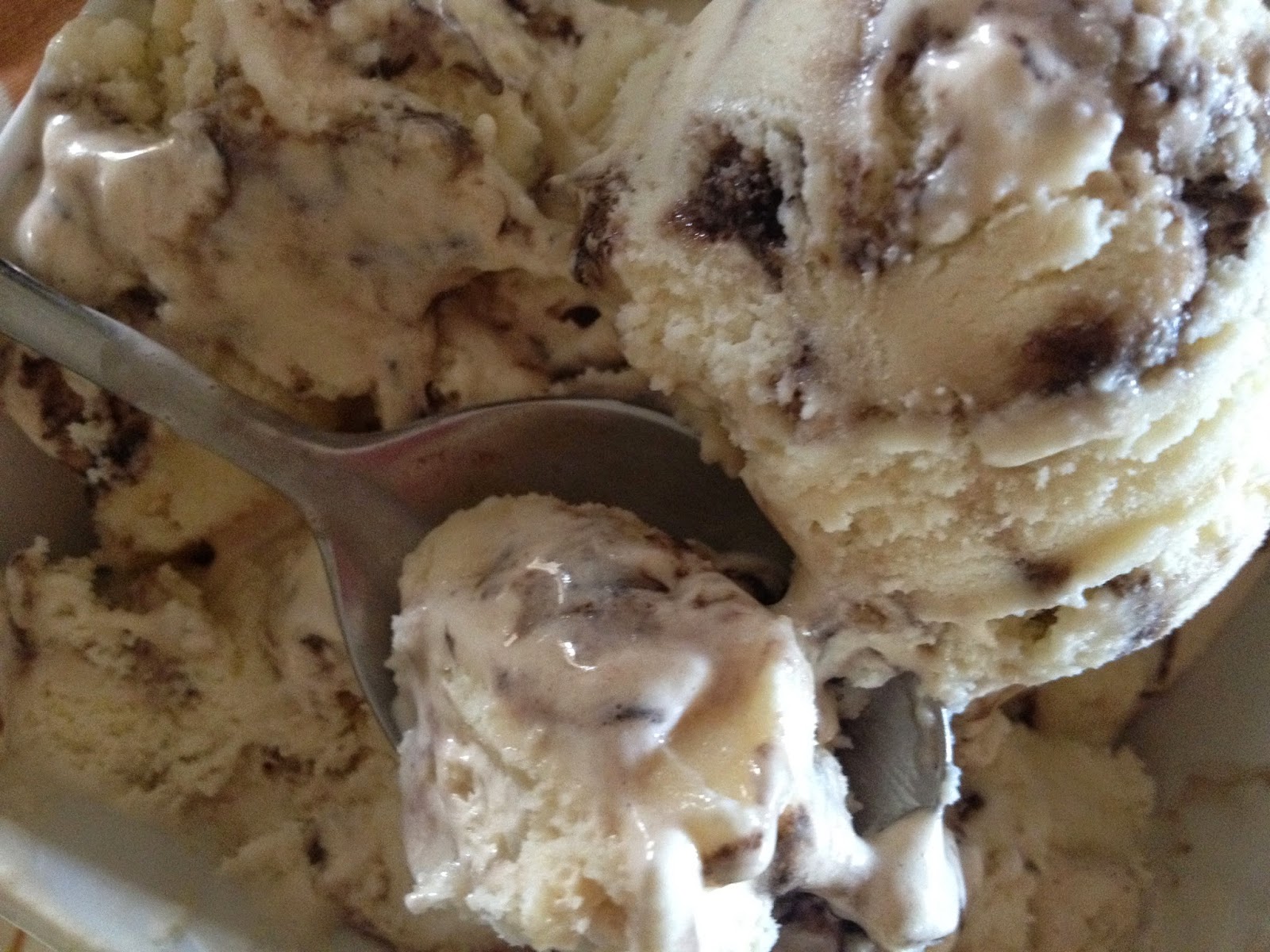 But to combat the heat of summer, which is already upon us here in Arizona, I highly recommend that you scoop it into a bowl, ladle a little more mocha syrup, and then slap a big ol' spoonful (or two) of mallow creme on top before calling it a dessert.

Now, like I said, Jenni enlisted several friends to participate in today's Ice Cream Tuesday, so if you like to choose your ice cream from those places that have more than 30 flavors, take some time to peruse all of the recipes we have to offer before you start churning on your own:
Summer and its hot days filled with cold ice cream are nearly upon us - so tell me: what flavor are you craving?


An InLinkz Link-up
Posted by Allison