Full disclosure: I forgot the ice cream at home on Thanksgiving, AND the brioche was really disappointing (the lack of rising the night before just led to rolls that were just OK).  Upside - I can have the ice cream all to myself (muahahahahahahahaha!).
However, Thanksgiving dinner was still lovely.  It was a smaller family gathering, but wonderful nonetheless.  There was plenty of food, something for which we all gave thanks.  After all, while modern media might have one think that the day is all about gluttony, the real reason behind the holiday is, of course, to reflect on how lucky and fortunate our lives are.

We had so much food, in fact, that we were able to make several lunches and small dinners out of the leftovers this weekend.  Of course, I worked to use our vegetable share into the meals, too.
We got more dill this week, but I didn't feel like pickling anything, so I found a rather simple spinach and chickpea recipe that utilized dill.  Instead of spinach, I used some arugula and mizuna, which I hoped would make up for the fact that I didn't have any onion (I also used the rest of our CSA garlic to boost the flavor). 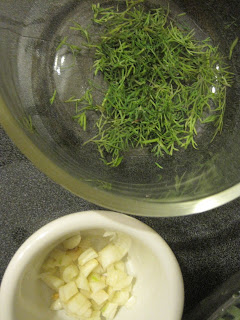 In addition, I used the last of the cranberries by putting them inside a baked acorn squash.  The color was quite pretty, but I think that since I was loathe to add that much sugar to my original cranberry dish, the finished product was a bit tart; I would use a little honey next time, which will also smooth out the squash slightly.
The chickpeas were tasty, too, although I always always always underestimate how many greens I'll need, so the greens-to-chickpea ratio was not quite balanced.  That being said, I would most definitely use the arugula in this recipe again, as I didn't miss the onion at all. 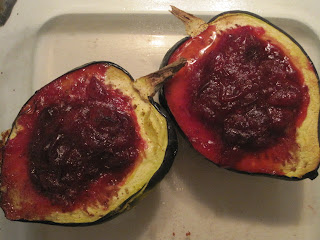 Today was a "what do we have" type of day.  I have been wanting an olive burger, something which I had never heard of until our stint in Michigan.  We cooked a few Morningstar® patties and threw on a slice of Swiss cheese.
Meh - they were OK.  I think, though, that the saltiness of the olives really works far better when there is a real beef patty next to it.  Something about the flavor of beef, the mildness of the cheese, and the olives make the taste something that can't be repeated with a veggie burger.  Oh, well.  The latkes, our side dish of the evening, more than made up for the disappointing result of the original main dish.
Instead of potatoes, we used the radishes and turnips we got in our veggie share this week.  These latkes were amazing.  They were simply flavored - just salt and pepper - but they were phenomenal.  The depth of the flavor that the radish and the turnip added made them better than any potato latke that I've ever had (and I have had some amazing potato latkes).  I was so sad that the count was only two apiece...and that hubby liked them as much as I did, so he didn't want to share. 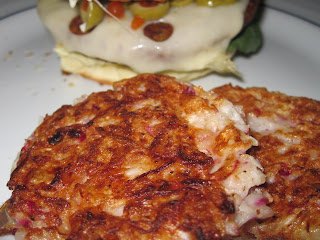 The last thing I did today was make a kalamata olive bread.  I found this recipe quite a while ago and have been wanting to make it for ages, but I'll be honest - I was too lazy to go get bread flour.  That changed today when I went to the store for other sundries (yogurt for Wee One, basically), and I decided, what the heck?
I don't like rosemary (in a similar manner to the way I don't like basil), so I just omitted that.  Everything else I duplicated as much as I could - I don't have a cloche, and if I weren't completely out of room for any more kitchen toys, I would totally be getting one.
I was pleased with this end result.  We didn't wait the full two hours to taste test it - I mean, come on - TWO hours?????  It was, instead, dessert. 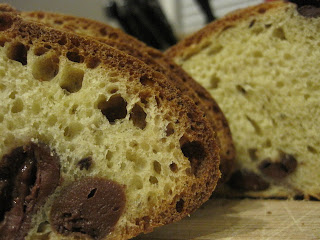 I do think I'd make two changes that were not noted in the original recipe (other than the whole get rid of the rosemary part):


But that just means I have to try this recipe out again... and again...

Last thing - I opened the fridge pickles with dinner, too.  I was really happy with them!  They were a touch sour, to I think I'd cut the vinegar and up the salt a little, but they were nice and crunchy, and I know they'll be great on sandwiches!
Posted by Allison