C is for Cupcakes!

***Editor's note:  this really isn't a "good food" post.  In fact, I highly recommend NOT clicking on the cake recipe link if you don't want to be able to hear your arteries clog up as you read.  But when your Wee One has a birthday party, it's time to get your sugar/fat/cholesterol on any way you can.
It was the weekend of the cupcake!  Princess Rufflebottom's birthday party was upon us, and I decided that cupcakes would be easier on me than a tiered cake like I did last year.
HAHAHAHAHAHAHAHAHAHAHA!
Perhaps that would have been the case were it not for the subsequent decisions I made regarding the party and/or cake:
OK, so that meant three different batches of cupcake batter and three batches of icing.  In one KitchenAid®.
Sooooo, I got up at 6 and began strong.  For many cakes in the past 5 years, I have used this cake recipe.  BE WARNED:  Do not click on this link if you do not want to see what went into the batter, which includes an entire cup of melted butter.  The recipe makes for a very moist, decadent cake, and I've been very pleased with the results before.
It may not be the best recipe for cupcakes, as every cupcake fell a touch.  No one noticed, though, since I just made sure to fill in any divots with extra buttercream.
The bonus, however, was that it makes more than the normal 2 dozen.  I got 33 cupcakes out of my first two batches, which were red velvet and yellow almond (the beauty of that recipe is that you can modify the flavoring however you want it).  After that many cupcakes, I figured it was probably a good bet that I didn't need to take the time to create a blue batch, too. 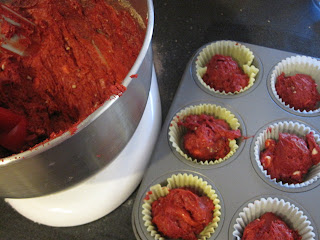 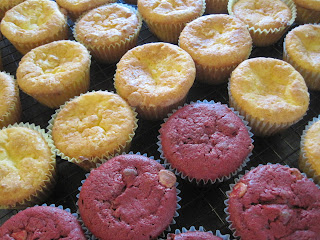 So we were on to the buttercream.  Yellow.... red which turned out more pink even though I used all the red coloring I had in the house (red, brown, and black a a major pain to create, as one has to use a LOT to make what was originally a white or off-white icing that brilliant a hue)... blue which was also a little too light for my liking for the same reason as above.  Whew!  OK, KitchenAid®, you can take a much-deserved rest; you worked hard today!
After having to modify the cake color plans, I decided to ice 16 in each color.  The red velvet cakes were either yellow or blue buttercream.  The yellow almond cakes were either red or blue buttercream.
Each icing color got its own tip - two different sizes of starbursts for the yellow (seemed appropriate) and blue, while the red ended up looking like roses (that was actually unplanned; I had visualized swirls, but when one is a lefty, the angles are always different, resulting in waaaaay different looks than normally advertised). 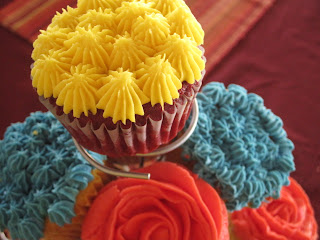 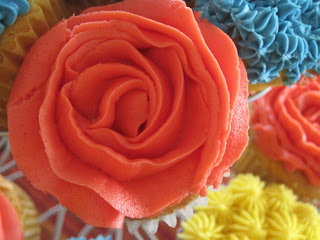 Of course, the goal was for people to enjoy the taste, not just the look, but I was really pleased with the way they all looked together.  I do think that the next time I make cupcakes on this scale, I'll have to do some work the night before so I am not scrambling to get showered before the party begins (I don't want to scare people off).  I also want to see how I can make that recipe more uniquely mine in the future... once the price of butter goes down a bit.
Posted by Allison