It's FINALLY feeling like fall.  Well, fall for Arizona.  Temperatures are chilly in the mornings and evenings, but they become pleasant enough to have the A/C off and the windows thrown open during the day.  Thus, we have entered Soup Season.
Yes, I know I made (and posted about) a soup a few weeks ago (before the technical start of the season), but since it was a touch disappointing, I thought I'd try again.  I liked the concept of a squash and apple soup, but I didn't want to feel like I was eating liquid pie - soups, if I may opine for a tick, should have more savory tones than sweet.
Thankfully, my most recent issue of Vegetarian Times included a recipe for a squash-apple-leek soup at the same time that we received not one but TWO butternut squashes from our CSA.
(NOTE - I apologize - this recipe isn't on the VT website, even though it's this issue's "cover model.") 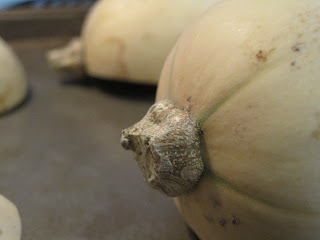 Since my mom is in town making a pilgrimage to visit HRH, I decided to make use of the long weekend that I have to make not only the soup but another attempt at my pain complet.
This time, I did three things differently:


Upon review of the original recipe, I noticed that there was only one rising, so before the lovely ball of deliciousness was popped into the oven, it sat for about 45 minutes.  I think that this, along with the other two alterations I made to my own actions, helped make the end result less dense but still chewy enough to feel like I am eating something of substance.
The soup was next.  Last weekend, I made a vegetable stock out of the veggies that were, um, looking a touch peaked.  I can honestly state that this soup was made by me from beginning to end.  And the winery that contributed the 1/2 cup of white wine.  But basically me.  Sadly, the store was out of leeks (Seriously, who was getting the leeks?  I never see people buying them; I've even had cashiers ask me what they were), so I used an onion instead.
I was joined in the kitchen by my PIC, who made a lovely salad with the remainder of the arugula and mizuna, along with some julienned Granny Smith apples, hakurei, and Easter egg radish.  If that weren't enough, he took some of our garlic and roasted it so we had something nummy to spread on the pain complet.
Topping off the meal was a hash made of the last apple, potato, sweet potato, Easter egg radishes, turnips, and hakurei, tossed in olive oil, kosher salt, and pepper. 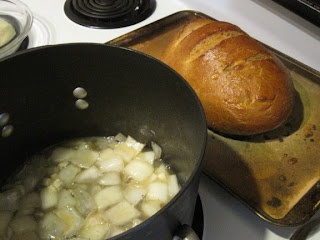 Well.... the hash was, as usual, awesome.
The bread - lovely.  It was especially nosh-able when smeared with butter and the roasted garlic.  I probably could have enjoyed that and gone to bed a happy woman.
The salad was great, too - refreshing and clean tasting.  The mizuna and hakurei melded nicely, and the arugula finished each bite off with, um, well.... a bite.
But.... sigh.... the soup was just.... lacking.  I can't lie - I've never been happy with a butternut squash soup recipe.  Every one that I have tried has been kind of "blah."  There isn't even a good word to describe how I feel about these soups.
I will say that this soup was not as sweet as the acorn squash and apple soup of last month, but to be honest, I think that the feeling that that first soup left in the mouth was bigger, and it left me a bit more satisfied.  I think I did use too much stock for the amount of squash that I had, even though I tried to add another apple to the mix to add a little "meat" to it, but it turned out really thin.
I'm not sure I'm ready to throw in the towel and admit defeat on the butternut front, but I think my next soup WILL include some different ingredients. 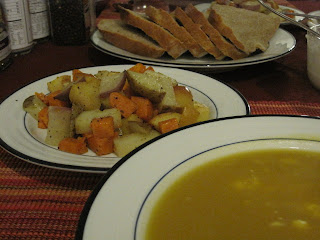