I was excited to receive dill this week in our CSA share, although that excitement quickly waned when I realized I really have no idea what to do with dill except to make tartar sauce or as a garnish over salmon.
I confess that I do enjoy a well-made tartar sauce (lots of pickles, lots of dill), but making it is beyond my abilities; I can't make anything with mayonnaise as the main ingredient.  It honestly makes my gag reflex step into overtime.  So tartar sauce is out (plus, then I'd have to make fish and chips, and that's just too much work).
And we don't have any salmon.  I know I can go out and get some, but we are in Arizona, not known for its consistently great seafood selections.
The only other use for dill, in my mind was pickles.
As luck would have it, we had an Armenian cucumber in the fridge; it was in our share last week, so I found this refrigerator pickles recipe by Martha Stewart.  I have no idea what a kirby cucumber is, but I figured that the Armenian one would be fine.
I knew that wouldn't use all the dill, and we also had a TON of okra (I'm so not tired of it yet, but hubby is, it seems), so I figured that I could pickle those, too.  So, I found this pickled okra recipe from my Food Network hero, Alton Brown.  Since this was an actual canning recipe, I sliced and salted my cukes as per instructions and then ran to the store for more canning lids and some dill seed. 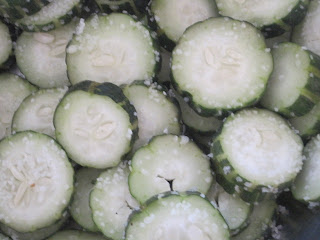 But then, after I started the process of chopping the garlic and adding it to the pot full of vinegar, aforementioned dill seed, and mustard seed, it occurred to me that we had just received a lovely bunch of jalapeño chiles, courtesy of my mother-in-law's garden (also home to what must be the world's largest basil plant).  So, I decided to change the plan and use, instead of dear Alton's recipe, one from Emeril - BAM!
I have to say, the smell of the brine solution cooking was enough to clear my sinuses.  But it was quite lovely to see the mixture come to a boil anyway. 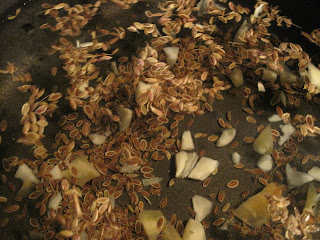 I am really, really, REALLY hoping that we get more garlic in our share next week.  We have gone through all of it, and I had to actually cut back on how much the okra recipe called for, which was disappointing.  Pickled garlic is something that I fancy a great deal; garlic is my favorite olive stuffing, too, so I'll be sure to be spearing the chunks out of the jar along with the pickles. 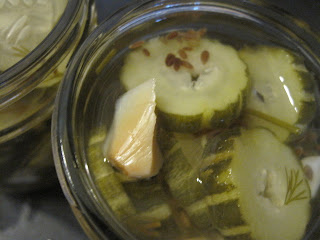 When all was said and done, I had two jars of the pickle chips and four jars of the okra.  Because we were warned that the chiles were pretty hot, I was convinced to only put one of each in TWO of the okra  jars.  That way, if those jars end up melting our mouths, we can salvage the other two (at least that's the idea). 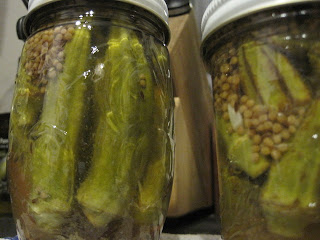 Sadly, I am not able to report on the taste of either batch.  While the pickle pickles are only fridge pickles, the recipe still instructed me to wait a week before digging in, and I don't want to be disappointed in any lack of flavor.  I'm counting down the days until I can crack open one of those jars.  The okra, on the other hand, is going to take a month to mature, so that might just be a Christmas "surprise" for us.
No matter what, I'm pretty stoked - with the exception of the two seeds in each recipe, all of the plant-based ingredients came from our CSA.  While I'm certainly no woman of the 1800s, canning and preserving because it's a way of life, I am making use of the foods that are available to me and making sure that I am not wasting them.  And that's the important thing.  In this season of gluttonous excess, the notion of wasting food when others have none is utterly repugnant to me, and if spending an afternoon smelling of vinegar and dill can help keep me from taking what I have for granted and thus focus on how I can ensure that fewer do go hungry, then it's paid for that time tenfold.
Posted by Allison