I love all-in-one dishes!  They are so much easier to make and serve.  Since my dear husband got home late this evening, I flipped through several of my cookbooks, looking for something to use our veggies - first batch of 2011!! - but that was quick.  Then I decided just to look in the fridge and throw something together.  I'm getting better at this. 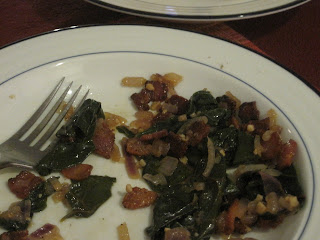 
Cook bacon is large pan at medium high heat until crispy.  Remove bacon from the pan with a slotted spoon, leaving the drippings.  Add onion and garlic; cook for two minutes.  Add the greens and toss to coat in the drippings.  Add the broth, cover, and simmer on medium heat until greens are completely wilted.  Add the bacon back to the pan and remove from heat.  Serve immediately.
Of course, the beauty of this recipe is that you can modify it in many ways.  It would be excellent with pancetta (my favorite).  If one wanted to have a vegetarian version, olive oil and vegetable broth could be substituted.  Instead of a red onion, a Walla Walla sweet or even a basic white one could be thrown in.  And naturally, any green could be used instead of the chard.  We actually had a medium bunch of chard and a bunch of some other leafy green that I couldn't identify, so I used those.
However, I really liked this version, since the saltiness of the onion and the sweetness of the red onion really melded together well with the chard and the bread, which we used to sop up every last bit of precious pot liquor.  Even though we do live in the Valley of the Sun, it's still nice to have a stash of cold-weather recipes for when the temps fall.
Posted by Allison