The Great Brisket Freakout of 2012: Aftermath 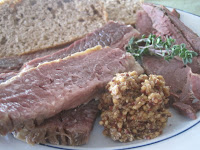 In the wake of St. Patrick's Day, I realized that once again I never actually took any photos of dinner.  It was probably because I was crazily running around, trying to iron the tablecloths (plural, because we needed two tables and still didn't have enough seats) and napkins (yes, I iron napkins - it takes attention away from the walls that only have paint samples on them), make a double batch of brown soda bread, let HRH help me bake half-and-half brownies, and get some adult conversation in while we had friends over, all while Zooey, who was banished to the backyard for both allergy and food-stealing reasons, kept trying to implore me to let her in.  I also had a half-and-half (stout and ale) myself, so I was desperately trying to enjoy that, too.
My parents used to hold rather large dinner parties, and I recall me always being in the way when they were cleaning.  I hated it then, but I totally get it now.  There is always way too much to do and not enough time to do it, even though your real friends really don't care if you vacuumed under the couch or dusted the baseboards (for the record, we did vacuum under the couch, but the baseboards were left to fend for themselves).  Poor HRH was pretty pissed by the end of the evening, even though there were other kids over to play with her.  At one point I let her help me make brownies, as I could tell that all she wanted was to spend some time with her Momma, and she is truly a great kitchen assistant, especially where baked sweet treats are concerned.  Other than that, I used the time-honored parenting tradition of keeping her pumped full of sugar to keep her mood elevated until she just crashed out, with chocolate all over her face, in my bed, snuggled up next to me.  No regrets, people.
Despite the insanity of the day, it was a great time.  We had a house full of good friends to help us enjoy (and take home) a large portion of The World's Largest Brisket Purchase - the "goodie bags" of pastrami instead of dollar store junk went over EXTREMELY well, and I'm starting to worry that this will become The Husband's New Thing To Do At Events - "Here - take home a baggie of turkey giblets for the kids!"  The Husband ran to the store and got way too many things right before people came over, so he made bite-sized Reubens (sans Thousand Island dressing....ewwww) as an appetizer, while I whipped up a batch of green hummus (regular hummus with some kale in it) and put out some pita.  That was gone in about three minutes.
Our friends brought over cheesecake (curse you, friends, for leaving said cheesecake here for me to deal with, alone, during the week) and a loaf of soda bread from a different recipe than I used, and of course everyone brought beer, so we were well stocked for the evening.

Last year, when we had family friends over, I pulled out my china.  And then spent half of the next day washing it.  This year, The Husband suggested that we use the "fine Chinette."  So we did.  I have mixed feelings about creating all that trash, but I probably used more water last year than is appropriate to admit when you live in the desert and water is a touchy subject in the legislature.  So really the only cleanup was the washing of the various pots and pans that we used to make everything else.  So... everything in our kitchen EXCEPT flatware was washed.  But at least it didn't take half a day.

And now that I've had 25 pounds of brisket to ruminate upon (which fortunately meant that while I didn't take pictures at dinner, I had plenty of leftovers to snap), I do think that I can say with certainty that I do prefer pastrami to corned beef.  The smokiness and the flavor of the black pepper rub added to the flavor of the brine makes for a great sandwich.  The Husband and his mom have repeatedly said that it was "really salty," but I love salty food (she wrote as she sucked down 16 ounces of water), so maybe that's why I loved it so much.
I think, however, after the drama that I created for myself over the excessive brisket purchase, next year I want to go down a different St. Patrick's Day path and go for a menu that is, you know, actually Irish.  Corned beef and cabbage is not actually Irish, and from what I have read, no one really knows how it became associated (in America, at least) with Ireland.  So while The Husband loves corned beef and cabbage, I am going to lobby for something more traditional and, you know, actually Irish.
But you can be assured that whatever we have, we'll have goodie bags.
Posted by Allison