One Kitchen, Many Hearts - Halfway Point

I have to admit that while I do love getting the gifts from my blogging besties, I really do love the sending of gifts more.  This month, we were at the halfway point, which meant that we sent packages to the people who were sending us packages.  Megan over at Wanna Be a County Cleaver and I were package buddies this time, and I feel like it's kind of fitting, since we are both native Washingtonians and share a huge love of beer.
I was terrified that my package would get there in pieces, but I'll have to send you over to her page to see what the end result was.
Megan's package was basically an In Case of Emergency theme, which was perfect timing, as it came smack dab while The Husband was off on not one but two business trips (he was home for about 48 hours between the two), so I was flying solo for all of HRH's meltdowns, hissy fits, and tantrums.
So that In Case of Emergency basically became When You Open This Box. 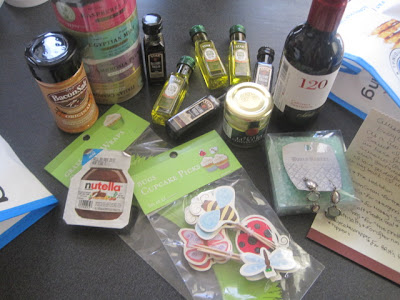 My girl knows what my emergencies entail.
The contents:


The Bacon Salt, while containing no actual bacon, has a rather delicious bacon-y flavor.  It is great on a hard cooked egg!
The Nutella and cream were devoured with the wine one evening after HRH had been particularly keen on throwing hissy fits; it was the night TH got home from his second trip, and I was worn out.  The combo of the chocolate and cream on toast (I was fresh out of English muffins or crumpets) along with the wine - which I nearly just drank from the bottle with one of HRH's crazy straws - was just what I needed to unwind.
We haven't used the cupcake toppers yet; HRH needs to show a little attitude adjustment, and this heat is making us all basically turn into bears.

Fun fact - if you are headed to a family reunion or some other event that may have you stalling for conversation, get yourself a six pack (or more) of these little travel bottles - they are perfect for The Handbags.

What was so fun was Megan's choice of packing material.  Since she was lucky enough to go to Blogher Food in Seattle, she had an abundance of goodies, including several Pretzel Crisp shopping bags, so she used them to pack everything in.  She knows me too well - reusable bags as the reusable packing material!
The only down side of this is that when I use said bags at the grocery store, the clerks all feel compelled to tell me that Pretzel Crisps are on sale or that they just got some in stock that day like I'm some Pretzel Crisp junkie who can't stop.
Which might be true.  I can't verify that right now.
Having friends such as these five ladies really shows that The Internet isn't as scary as a place as some people might think, and boy has it been fun getting to know them all.  While some day we hope to all live on the same street à la Desperate Housewives but without The Crazies, for now, these packages share a lot more than just gifts; they are creating a bond that time zones and state lines can't contain.

Check out what everyone else received at the 50-yard line of The Packages, too!
Then, round up your favorite blogging buddies or other friends from across the country and schedule a gift exchange of your own!
Posted by Allison