Happy Independence Day (and a belated happy Canada Day to my neighbors to the north)!!!!!

Case in point: today.
Until I start "officially" training for my next half marathon, I'm running on Mondays, Wednesdays, and Fridays, so today is a running day, regardless of the holiday situation.  Since it's been ohmigosh-so-stinking-hot round these parts (and basically every other part of the country), motivation to get up and head outside for a run has been.... ummm.... rough.  I am careful not to overheat Zooey (who gets almost two full bottles in my hydration belt all to herself) or myself, but I don't want to contain myself to short down and backs.  Almost as boring as running laps on a track - blech.
I like variety in my scenery, thank you very much.
Thankfully, we've had a bit of cloud cover, which has helped cool the temps down a bit.
A bit.
Comparatively, I mean.  It's not like we're back to the 60s or anything.
But even a small difference in the heat can mean that I'm willing to stay out a bit longer before heading back in.
I'm a little concerned about how things will go when I do start that "official" training.  During August, even my long, slow weekend runs are going to be short enough that I'm comfortable bringing Zooey, but September can be just as miserable as August.  I always hope that the temps will cool off earlier than usual, but every year I'm disappointed that I'm cursing the heat well into October.  There is the chance that we will see evening (and subsequent early morning) cooldowns, which will make running at 4:30 tolerable again, but really, who knows?
Currently, The Husband and I are still in talks regarding possible treadmill purchase/gym membership.  However, Agnes, our Buick, decided to crack her head gasket, so we're currently in the market for a new(ish) car, which takes precedence over either a treadmill or gym membership. Soooooo... whichever one of those we end up choosing will have to wait.  In the meantime, I'll be sweating it up along the canal.

On a more positive front, I'm making strides in the Hundred Pushups Challenge.  I did take a small step back and repeated Week 3 last week, which, the time around, was almost too much for me.  While I didn't love repeating the week, I think it was a good decision, as this week I've felt stronger as I began Week 4 with 63 on Monday. 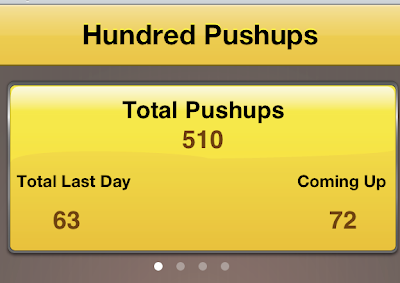 I have done more pushups in the past 5 weeks than I think I have combined in my life; the only time I remember ever doing them prior to this challenge was during the Presidential Fitness Test in grade school, and I'll be honest - it's not like I went out there trying for those.
I had to save my energy for rope climbing.

If you read this blog with any regularity, you'll remember that I posted a week or so ago about how my focus is changing here.  A further epiphany I had this week was that I now follow more runner and running-types on Twitter than I do food bloggers.  While most of the people I have met via The Twitters are truly a friendly group of people, I'm continually impressed with the welcoming atmosphere that these running Twitter-ers (tweeters?) have for others who enjoy running.
I still consider myself a "baby" runner, having only run for about two years with not that many races under my belt, and I'm constantly awed by those who are training for their bazillionth marathon, ultra marathon, or Ironman but still are kind enough to say hello during Sunday #runchat.
Defense Exhibit A: Bart Yasso (read: BART FREAKING YASSO!!!!!!!) 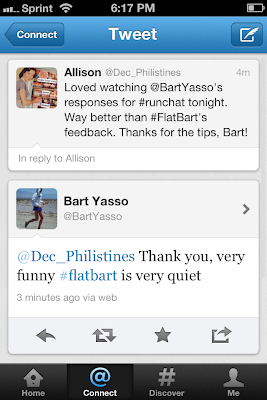 Alex (@alexbridgeforth) is another - non-famous - runner I've met this way; it's always nice to meet fellow runners here in Arizona.  He's one of those people who is currently training for his bazillionth marathon, and he's one of those people you can just tell greets everything with enthusiasm and excitement.  His positive outlook is contagious!  Alex blogs over at Addicted to Running, where he regularly interviews fellow runners, including moi.  You can read (and see, via the magic of Skype) the interview here; thanks a lot, Alex - it was a lot of fun to chat with you!
(if you would like to take part in Alex's interview series, let him know - I'm sure he'd love to chat with you as well!)
Oh, and it was also pretty awesome that Bart Yasso tweeted me AGAIN (he is one of the people I told Alex I'd love to run with someday). 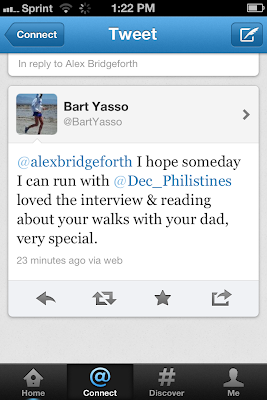 Yes.  When Bart comes to Phoenix, you can be sure as shooting that I'll skip work to run with him.
And blog the s*** out of that experience.
Stay tuned.

This weekend, we're headed to San Diego, and I'm so looking forward to running along the beach that I can hardly contain myself.
I actually may never come home.

How are you spending the holiday weekend?
Do you pack your running gear for vacations?
Has anyone famous ever posted to your Facebook or tweeted you?
What is your vehicle's name (yes, I'm assuming everyone names their cars)?
Posted by Allison