When a Friend of Yours Gives You a Bazillion Lemons, Part III

FINALLY!!!!!
Finally, I was successful in getting good-tasting marmalade to set!
Mostly. 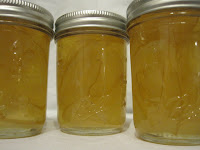 It's still a little more liquid than I'd like it to be, but after a taste test (on some freshly baked bread), I determined that this batch - #3 of lemon, #4 overall - is going to count as real lemon marmalade and NOT a failed attempt.
Of course, since we still have lemons, I'll be tweaking things in a fifth go around.  But, basically, I used this recipe as my starting point, modifying from what I've learned in previous attempts: 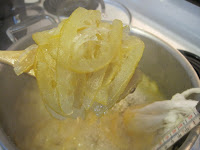 Next time, I need to cut the lemons into fourths rather than half, as the rinds were a little long.  But overall, I am extremely pleased with the outcome; I have never been a fan of marmalade, but right now, I am trying to decide how many half-pint jars I can justify keeping.

So far, I've been able to make the lemon marmalade, the grapefruit marmalade-come-syrup, and a rhubarb lemon chile preserve that is going to be awesome with cheese and crackers.  I also started the process of making limoncello, which will net the results in about three more months, and I tried to make that Shaker lemon pie; I would be willing to give that a second go.  I still have plans to make lemon curd with scones and some preserved lemons.  And what about the grapefruit?  I'm thinking candied peels with the remains from some tasty breakfast sides.
Posted by Allison