When a Friend of Yours Gives You a Bazillion Lemons, Part IV 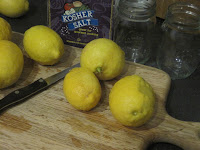 I actually shipped off some of my precious, precious lemons (and grapefruit) to three of my friends earlier this week, so I am running low and may need to go steal some more off Danielle's tree (pretty sure she'll let me).  I'm looking forward to finding out what they make!
Last night, I decided to preserve some of the lemons I have left.  Preserving lemons is pretty simple.  The secret ingredient is salt.  No, really - you take kosher (or sea) salt and lemons that have been scrubbed clean, and stick them in a sterilized jar... voilà!  Preserved lemons!
OK, there is a bit of a process.  First, cover the bottom of the jar (I would not recommend pint jars like I used - still too small) with salt.

Then, take your lemon and cut off the stem and the little bump/nub at the other end.  Slice them nearly in half; turn 90 degrees and repeat; what you'll have a lemon that is almost cut into quarters, but it's still all attached.  Do this to all your lemons (duh).
Confession - I did accidentally slice all the way through two of my lemons.  I totally squeezed them together and pretended I didn't and then shoved them into a jar where there wasn't enough room to tell the difference anyway.

Pack a bunch of salt into the lemon - a tablespoonish amount appears to be the norm for recipes you'll find online.
Once finished, shove the lemon into the jar and repeat the process, adding a layer of the salt between each layer of lemon.  You may have to really truly shove at the end to get everything in.  End with a final layer of salt.

Now, in Morocco, different spices are added, and I would love to add a little cinnamon and whatnot into some jars next time (read: when I can get some bigger jars and a few more lemons) to see what flavors I end up with.
Regardless of the different spices that may or may not be added to the jar before sealing, once the jars are sealed, they can be left on the counter (where you can't forget them) for two or three days.  Every time you go into the kitchen, give the jars a little shake.  This helps spread around the salt AND get those juices flowing (it's helpful to have juicy lemons - look for lemons that are heavy for their size; that means they have a lot of juice - same goes for any citrus).

After three days, the lemons should be completely submerged in their juice.  If not, add more from another jar or another lemon that has been relieved of its zest for another tasty endeavor.  Then, throw them in the back of the fridge, where they need to "age" at least three weeks before using.
I am not completely certain what I will use these lemons in, but I'm thinking a salad would be nice as well as perhaps a fruited couscous or even add an accompaniment to fish... as well as perhaps snacking on them right out of the jar (once properly rinsed, of course).
I'm also thinking about what I could do with the brine.  It will be more acidic than your run of the mill brine made with water, but I would hate to just pour it down the drain.  At first I thought of having a salty dog party, but those are with grapefruit, and THOSE certainly won't fit into pint jars!
Any suggestions???