You might think that I'm cheating on the title so I don't have to give a recipe.  But the joke's on you!  This post is about GRAPEFRUIT!
Yep, I decided to try grapefruit marmalade.  Even tart grapefruit is sweeter than lemons, right?  So it can't be that hard to screw up, right?
Hahahahahahahahahahahahahahahahaha! 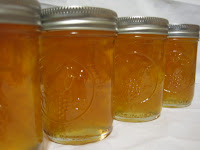 I found what I thought would be a pretty fail-safe recipe (clearly, I am Einstein's definition of insanity, right?).  The most difficult part of it, really, was removing the pith.  Grapefruits have a s*** ton of pith, by the way, in case you were curious, and it took a good long time to scrape it all off but keep the peels in tact.
The biggest difference between a marmalade and a jam (yes, I totally looked it up) is that marmalades don't use an "outside" gelling agent (like Sure-Jell®).  All the pectin is found in the fruit; marmalades generally use citrus, and in fact the pectin that is used to make store-bought pectins generally comes from a type of lime (fun fact of the day, right?).
Thanks to our limoncello making party, I had an entire gallon sized zip top bag filled with pithy lemon rinds, so I tossed those into a cheesecloth bag while my concoction of grapefruit, grapefruit juice, grapefruit peel, water, and sugar boiled away to ensure a lovely spread buddy for my peanut butter.
After the allotted 30 or so minutes, I started gel testing with the saucers I had frozen the night before (when I started the process - it would seem that most marmalades are a multi-day project).
First saucer - runny.
Second saucer - runny.  I put the first saucer back in, just in case I needed it.
Third saucer - runny.  I put the second saucer back in the freezer, too.
Fourth saucer that was really the first saucer used again - runny.
Fifth... second saucer - runny.
I was now at over 45 minutes AND, of course, HRH decided to take a really short nap (even though she was sick and needed a good long sleep), so I did what I could, but at some point, I had to jar this stuff.
So I did, hoping against hope that, like gravy, it would "thicken as it cooled."
No dice.
For the count, that would be three marmalade batches that turned out less than expected.
However, at least I got the taste down on this one.  I think.  I mean, basically, what I have is... grapefruit syrup.
So I did what any self-respecting wannabe home chef who has failed at all marmalade attempts would do: I had ice cream.
I think it's good, but I'm not sure how it's SUPPOSED to taste.
Fortunately, I was able to see our friend Ellen for coffee this morning, and I gave her a jar.  I did tell her that I wasn't totally certain of it's tastiness factor and to be honest with me (and to pour it down the sink if it really is flat terrible).
I have a few more friends who, I hope, will be willing guinea pigs for this.  Who knows - perhaps this is going to be the best waffle topping since peanut butter and maple syrup.
But I have another batch of lemons waiting to try their turn even as I type this.
Posted by Allison