Word of Warning - When You Hit the Trail, the Trail Hits Back

Since I've come back from my Pat's Run slump, I've been running almost completely naked.
In case you're not a runner and sat at attention there, running "naked" means that I'm not strapping on a GPS or heart rate monitor to constantly tell me my pace, speed, etc.  I'm not actually running naked.  I can't imagine how uncomfortable that would be.
For me or any passers-by.
Anyway, I say "almost completely" because I still take my phone, on which I have my GPS, but I have set the GPS to stay quiet and not give me any feedback; it only tracks my mileage overall.  I'm using that because we have already established that I am TERRIBLE at The Maths and thus need some extra help in calculating when I need new shoes (I am due for a new pair but am holding out for the end of the month).
I've been working hard not to obsess about how far or how fast I am going (or not going) and to just have fun running instead.  If it ceases to be fun, I really don't want to do it anymore.  But since it's getting hotter here in the Valley of the Sun, I've been sticking close to home on the canal, making for a bit of a Groundhog Day-esque running experience.
What's a girl to do in order to spice things up around here?
I've been thinking about adding trail running for a while now but had originally planned to hold off until the weather started cooling back down this fall, but when Kat called upon the Running Pack in the Sky for this weekend, I could not help but heed that call.
Zooey and I went for our usual run Friday morning along the canal, and as we ran, I decided that I just needed to stop saying "later."
So "later" became "tomorrow."
As in today.
While it's been hovering in the low 100s during the day, the Arizona nights are still cooling off, so I knew that as long as I kicked off as early as possible, both Zooey and I would be all right.
My location of choice was one of our favorite hiking spots - San Tan Mountain Regional Park, about 30 minutes away in Queen Creek.  I mapped out a route that was mostly a loop (there was a bit of out and back) that ended up being just slightly longer than a 5K, which was about as far as I wanted my first trail run to be.
I'm crazy.  Not stupid.
Usually, Zooey and I get up at 4:30, but since the park doesn't officially open until 6AM, I timed my alarm to make sure we got there shortly after gates opened.


Friends, I am here to tell you this - trail running is awesome.  Simply awesome.
Also, on a related note, I am quite certain that getting out of bed will prove next to impossible tomorrow.
The trails at San Tan are appropriate for hikers, cyclists (there were about a bazillion there this morning), and horses; there are some deep dips on several trails, and on all of them, there are inclines, declines, and washes, which are usually dry.
It was the hardest run I have ever gone on.  I think, quite honestly, that it was a greater workout than even my half marathon.
In other words, trail running totally kicked my ass.
Call me a masochist; I can't wait to go back. 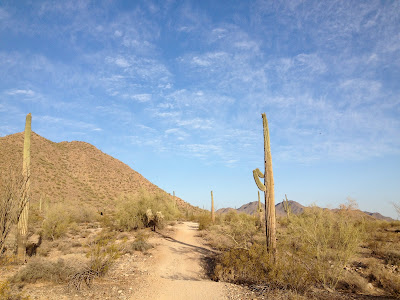 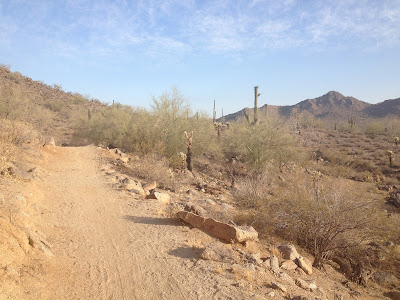 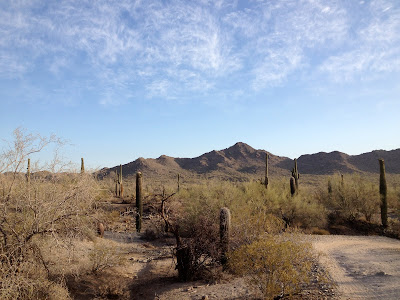 What do you do to change up your running (or other exercise) routine?
Have you ever gone trail running or hiking?
Do you run naked or fully geared?
Posted by Allison