Workout Wednesday - Cocktail Week Edition (Or, A Shandy is Dandy, but Nothing Rhymes with Radler)

I fully admit that I never really cared for beer until I studied in Germany.  That summer of 1999 was when my world was rocked to its core.

To my credit, you can't really call the carbonated yellow water that is generally offered at college parties as real beer.  Sorry, Keystone Light, but you certainly didn't make a connoisseur out of me.

So imagine the overwhelming joy at my first sip of a Pils vom faß (the pilsner on tap) at a local Regensburg restaurant my first full day as a student abroad.
Oh, my stars.
It was like hundred of tiny fairies were dancing on my tongue.
Truth.

Regensburg is in Bavaria, home to the 1516 Reinheitsgebot (purity law), which mandated that beer could only be made of barley, hops, and water (the law was lifted in 1988).  Thanks to many a Samuel Adams commercial, you probably already know that Bavaria grows the world's best hops.  You can infer from that, then, that Bavarian beer is some of the best in the world, specializing in Helles (light), Weißbier (like hefeweizen), and Pilsner, as well as the smoky Rauchbier.  You can also get a slew of other styles of beer, so if you have a hankering for a Dunkel, don't fret - you'll find it.

Another Bavarian contribution to the annals of beer history is the Radler.  Shortly after the end of World War I, cycling became extremely popular across Germany.  One innkeeper, Herr Frank Xaver Kugler, came up with the idea to have a bike path leading from Munich through the forest to his inn - the Kugler-Alm.  Thus, cyclists would stop off at his inn for something refreshing to drink on those hot, humid summer days.

Herr Kugler was not prepared for the thousands of cyclists who took the opportunity for a little weekend cycling.  Frantic, he mixed some of his remaining beer with a lemon soda and served it up, calling it a Radlermass (Radler - cyclist, Mass - liter of beer, the amount that was served) and claiming he had done so to ensure that his dear customers would remain safe and on their bikes on their way home (translation: don't drink and bike).

The cyclists loved it, and it became an instant hit.

Originally made with a Dunkel, as Bavarian taste evolved to the lighter beers, the Radler evolved as well.

You can get a Radler anywhere in Germany now; many breweries even bottle it and sell it on shelves.  But unless you're at a German restaurant here in the states, you'd be hard pressed to find one.  Most English pubs will offer the British version, the shandy (half beer - usually an ale - and half ginger beer or ginger ale).  I like the shandy and will often order one when I'm out at a pub, but I prefer just to make my own Radler at home.
There is, of course, the story of The Incident at the "German" Restaurant in Which No One Knew What a Radler Was Nor Would Anyone Make Me One Once Defined.  It was ugly, folks.  Then the poor waiter tried to convince me that the specialty of the house was a traditional German dish; for the record, anything with cranberries is NOT German; cranberries are indigenous to America.
Also, German chocolate cake is not German.
But I digress.

The Radler is the perfect drink when you want something a bit sweet but not "girly" sweet, something bubbly but are out of Prosecco after your indulgence in Peach Pie Prosecco Palmers, or something light but not a light beer.
And it's easy, too.

Radlermass
Combine equal parts in a tall pilsner glass (or, really, any glass that you want).  Enjoy, preferably with some bratwurst and sauerkraut slathered with thick, spicy German (or homemade) mustard. 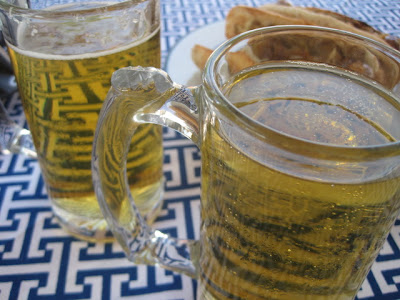 Seriously, it's that easy.

Since American sodas tend to be a bit sweeter than the lemon soda you will find in Germany, I generally use a little less of the soda than the beer.  We also are in the "pour the soda in first" camp, but it really doesn't seem to matter.  The Husband would also like me to let you know that if you add the soda to the beer, that foamy head will be created, which, in his estimation, is a complete waste of time and beer.
The important thing is that you find the combination that tastes best and is most refreshing for you.  Especially after that long, grueling bike ride.
Or that feat of mowing the yard in the sun.
Or just because. 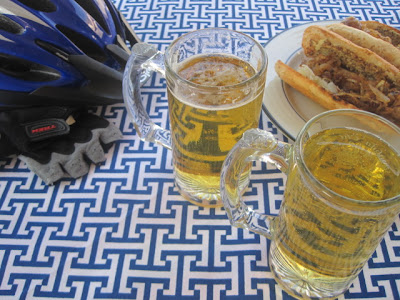 Hopefully, you're enjoying this virtual pub crawl we're calling Cocktail Week.  So far this week we've sampled:
...and we've only just begun!  Still on tap this week are at least six more lovely drinks to wet your whistle and keep you cool, so make sure that you come back for another round tomorrow!
Posted by Allison