#Reverb13 is a prompt-a-day series for the month of December that is meant to give participants the chance to reflect on the past year and take the opportunity to write down some hopes for the coming year.

ADVENTURE (according to Merriam Webster)

ad-ven-ture    noun    \əd-'ven-chur\
1. a. an undertaking usually involving danger or unknown risks
b. the encountering of risks <the spirit of adventure>
2. an exciting or remarkable experience <an adventure in exotic dining>
3. an enterprise involving financial risk

Reverb is turning out to be an exercise in redefining those words that I'd thought were already defined.  Challenge.  Victory.  Adventure.  To be able to make those words applicable to my workaday, everyday life is...refreshing in its own right.  We tend to think - not incorrectly - that adventure takes place in faraway places and require runaway boulders or ancient treasures.  But in all reality, anything that is, as the second bullet above notes, exciting or remarkable, can be an adventure.  And I hope that all my friends and readers have experienced something exciting, remarkable, and new this year.  If they didn't, I hope that 2014 holds many of them.

An argument could be made that my running has been an adventure this year.  But I think I've already talked about that plenty, and I'm sure that the opportunity will arise for me to talk about it again (and again...).

Because Going on An Adventure also means Board the Hound and maybe even Find a Weekend Sitter for the Kid, adventures aren't commonplace in the Philistines household.  But in the past few years, Husband and I have started to make our anniversary weekend as an opportunity for some sort of adventuring, even if it's just a restaurant in town that we haven't tried yet.

This year, I insisted that we once again take up what we had enjoyed while we were in Michigan, and go away for our anniversary.  While we lived in the Mitten, we drove up to Traverse City (if only for the day) and spent a long weekend in Chicago.  We also spent one anniversary in Washington, DC, while Husband was working in an externship for the district.  Less footloose and fancy free now, this year, we drove up to Jerome.

Like many rural towns in Arizona, Jerome came into being as a mining town.  There were copper in them thar hills!  But, like many other mining towns, Jerome's renaissance has really come and gone, and today, it's hard to imagine that it once was the fourth largest city in the entire Arizona territory.  It's now known more for its "ghost town" tourism, for, like other mining towns, many sites, including the Jerome Grand Hotel (which used to be the hospital), are considered to be haunted, which attracts paranormal hunters as well as artists of all kinds.

I admit: I love ghost hunting shows.  I watch... most of them.  Husband, on the other hand, scoffs at the mere idea of the paranormal, so I knew if we were going to spend a weekend in Jerome, I needed to make sure that we were NOT there to be amateur ghostbusters.  This proved hard for me to plan, since the Jerome Grand Hotel offers a ghost hunting PACKAGE.  Be still my beating heart.  To make sure I didn't cave to temptation, I opted to stay at a bed and breakfast "downtown" instead of the hotel.  And thankfully, the Verde Valley in Arizona has one more thing that we both enjoy to offer - vineyards.

As such, we dropped off the hound at the doggie hotel, dropped HRH off at my mother-in-law's, and headed north. 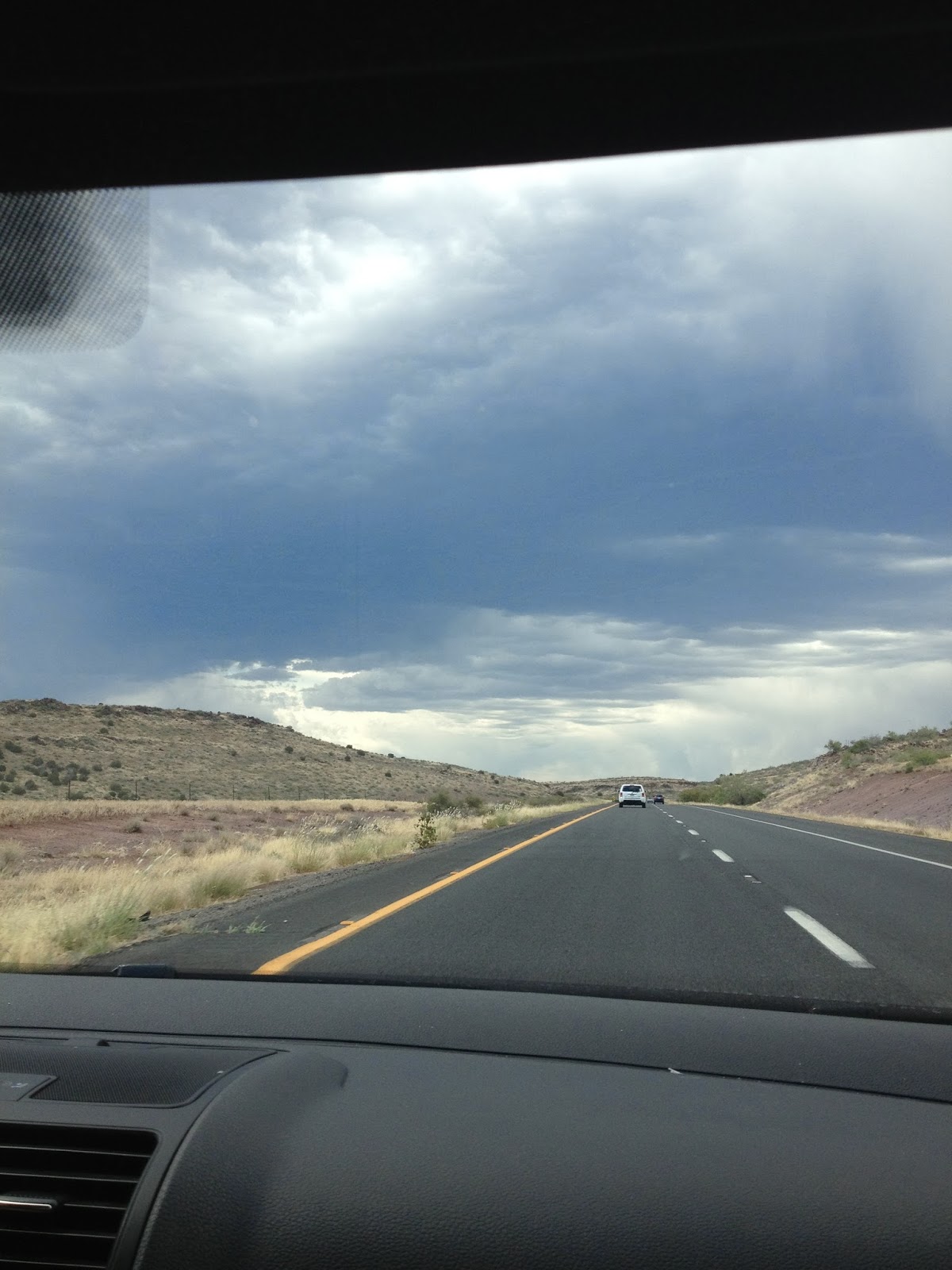 Just as a note - the weekend we were in Jerome, a lightning-sparked fire started outside the town of Yarnell, a fire which ended up taking the lives of 19 of the Granite Mountain Hotshots, a team of 20 firefighters who had special training in fighting wildfires.  As we drove to Jerome, we saw dozens of lightning strikes, which at the time, were as beautiful as they were frightening.  Arizona, as a desert state, suffers many wildfires each year, and I am grateful to those who risk - and sacrifice - their lives to fight these fires.

Our first stop was Page Springs Cellars, which is in Cornville.  Not totally on the way to Jerome from the Phoenix Metro Area, but not that far out of the way, either.  The tasting room offered nibbles on the patio, and once we were finished, we took our glasses and meandered through the vineyard. 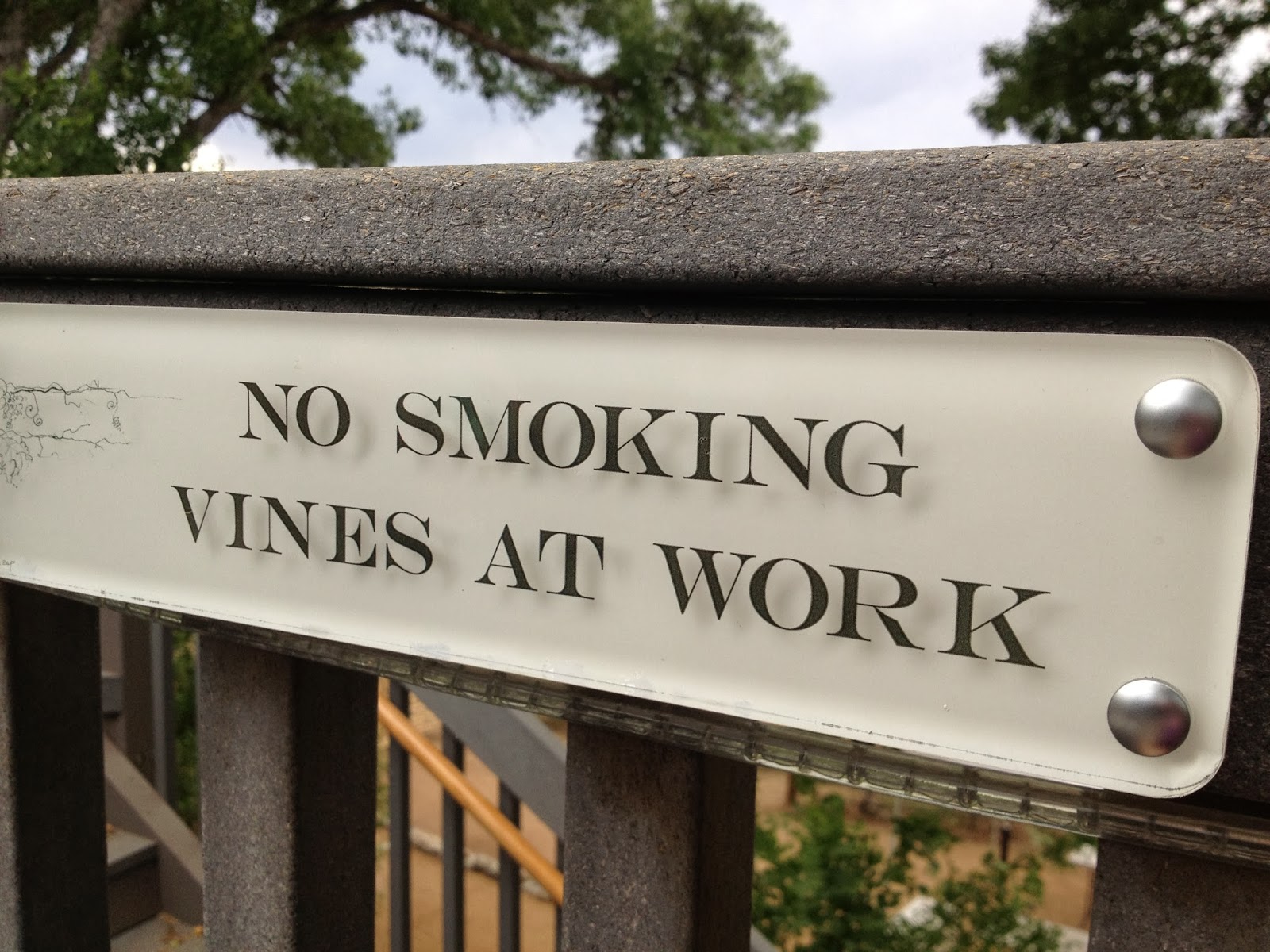 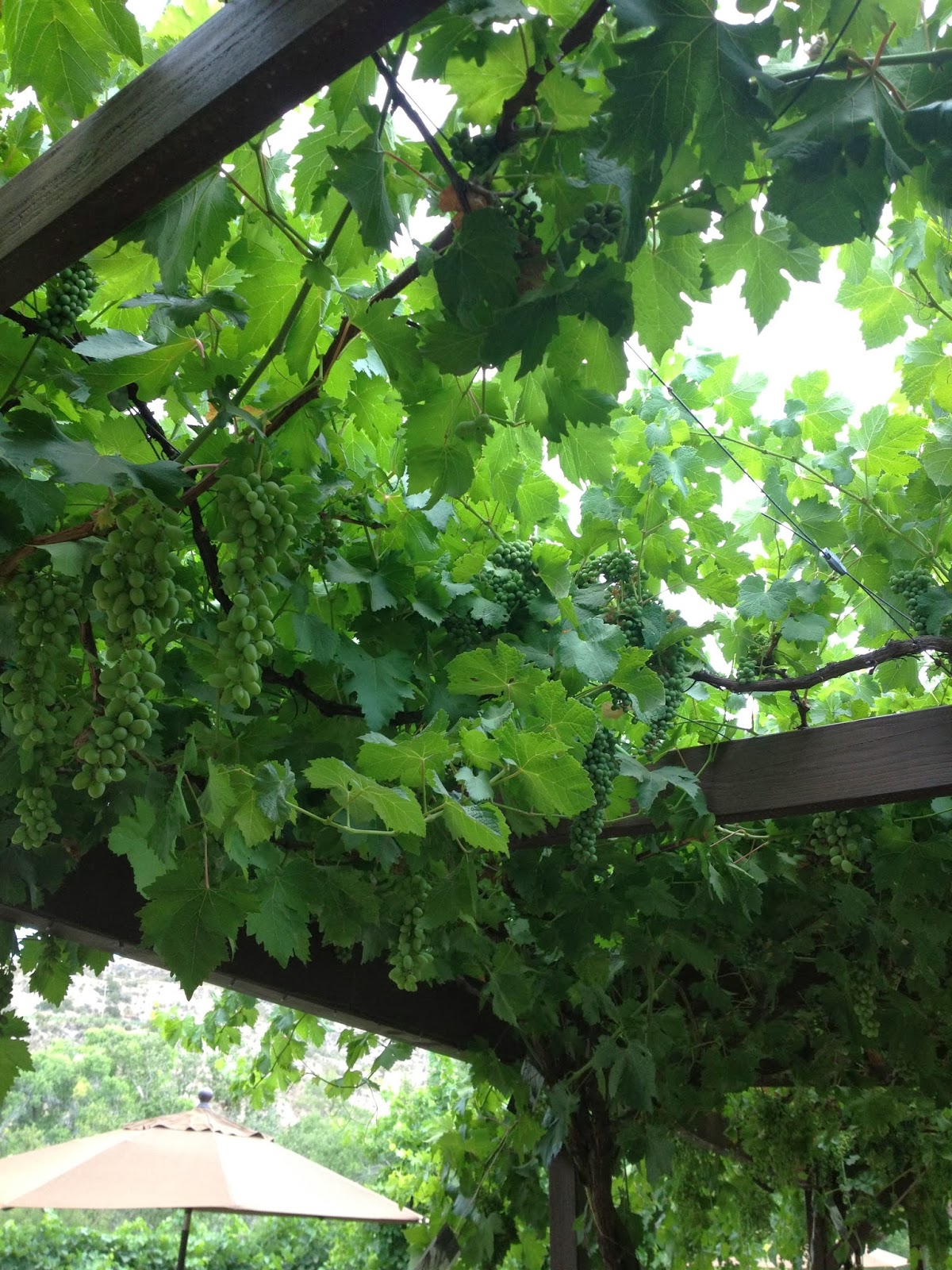 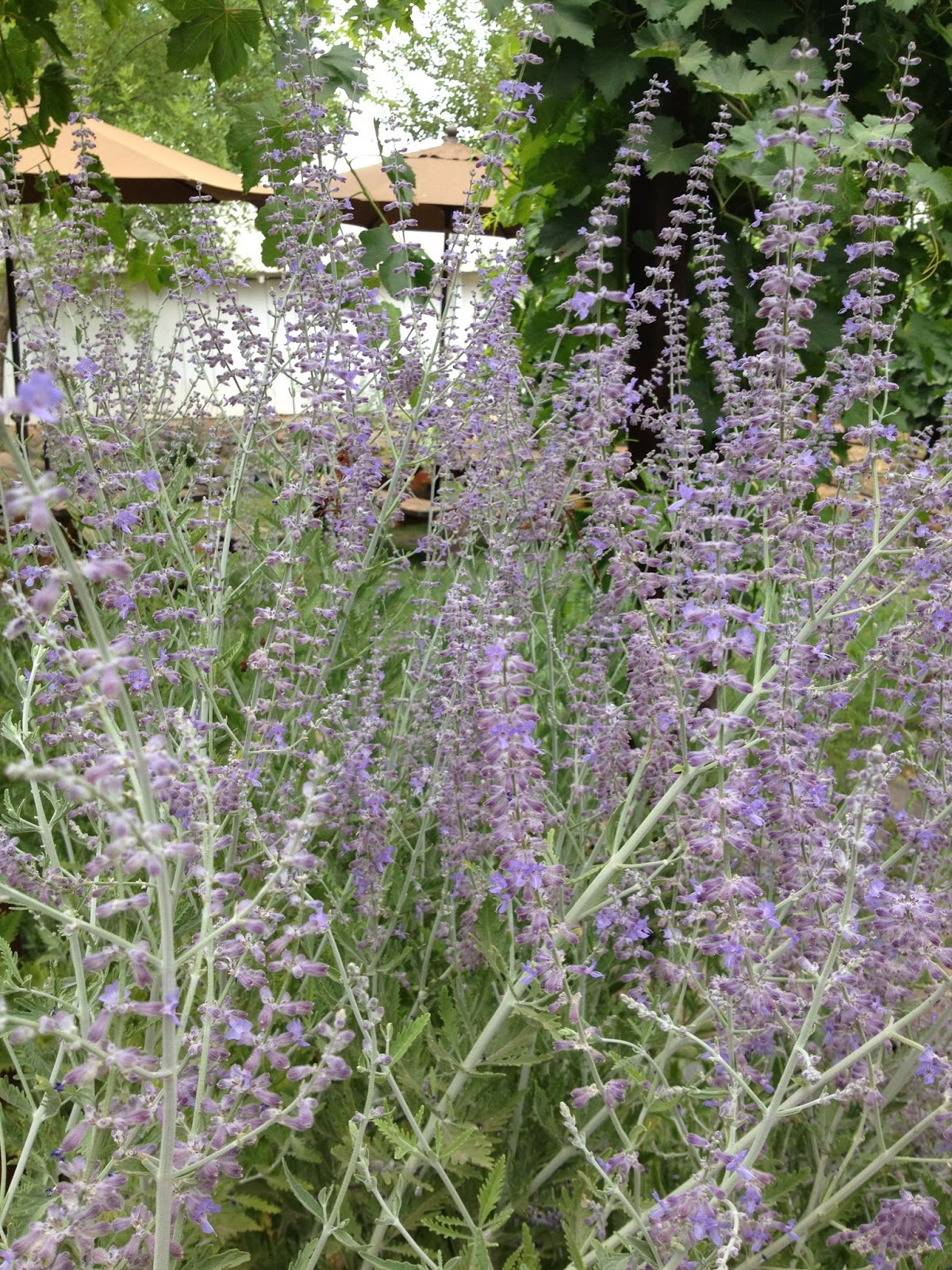 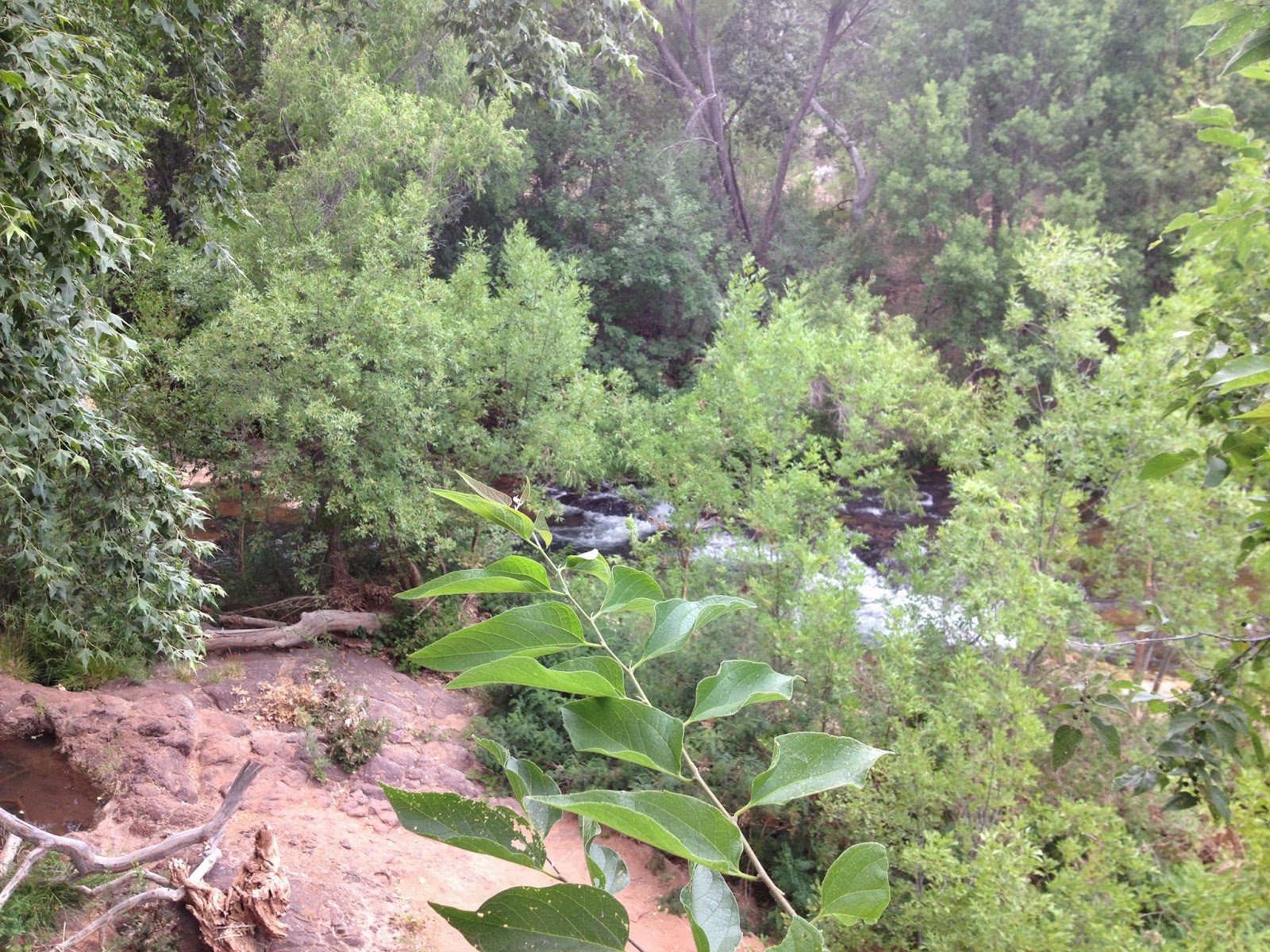 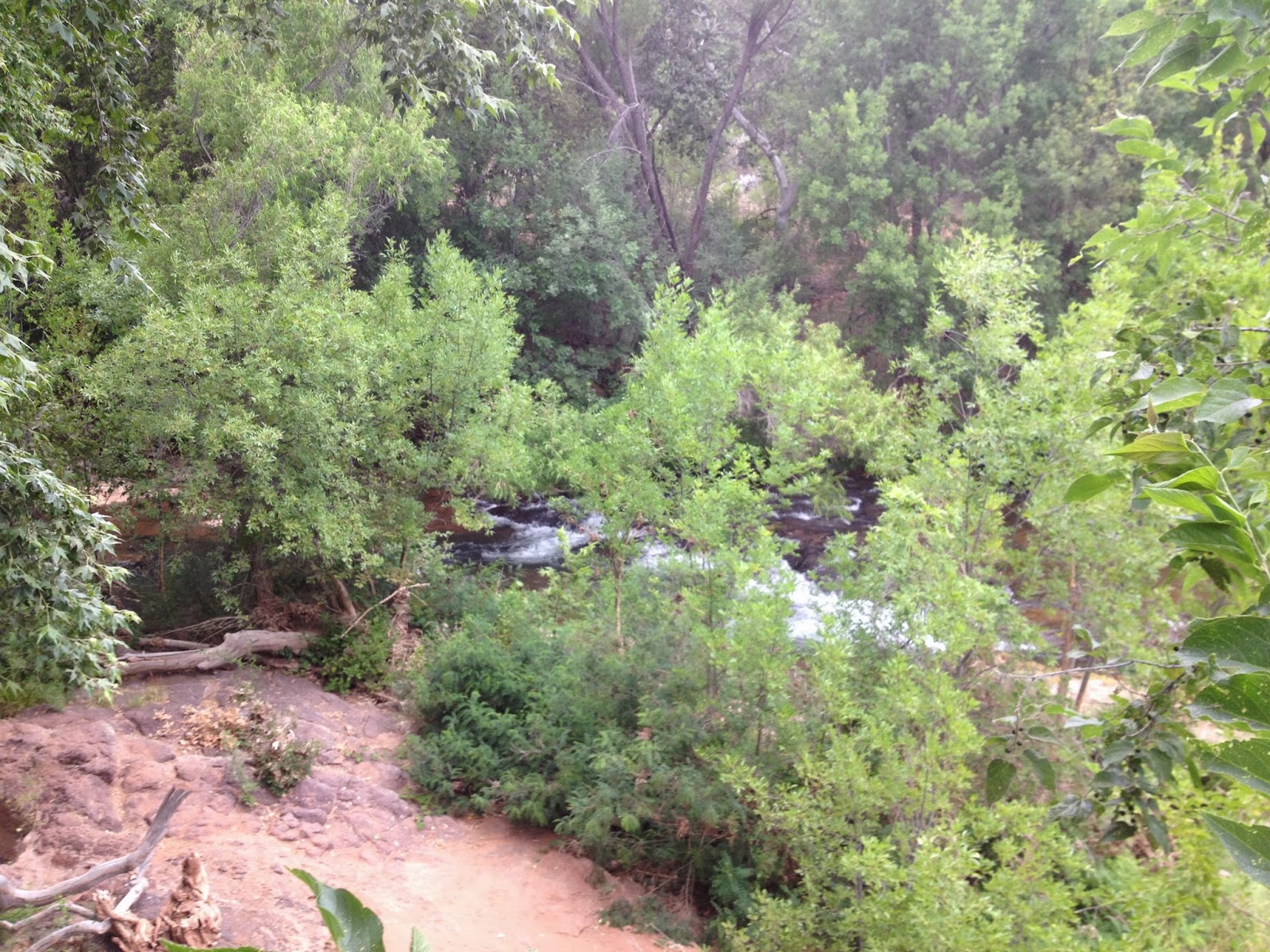 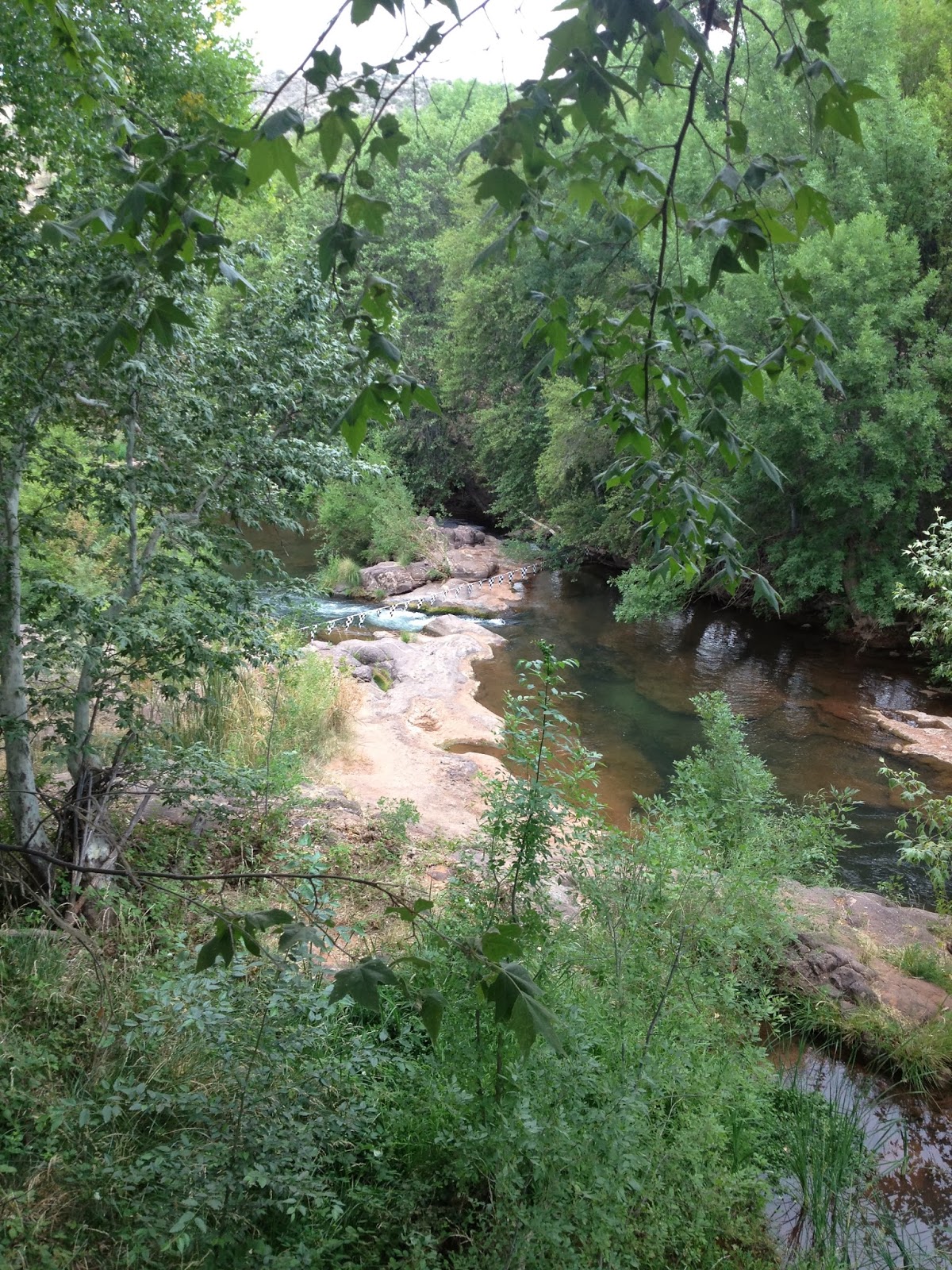 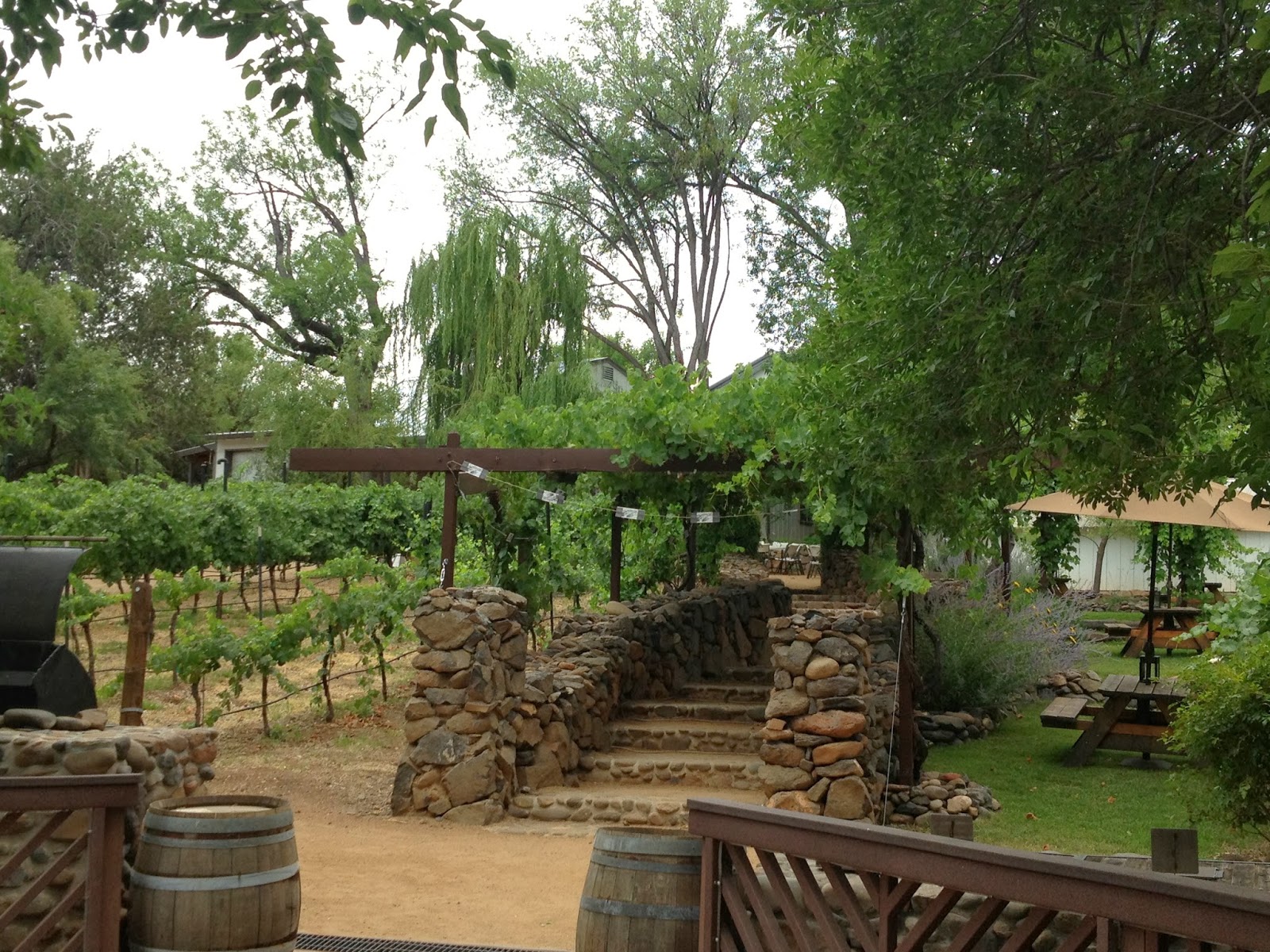 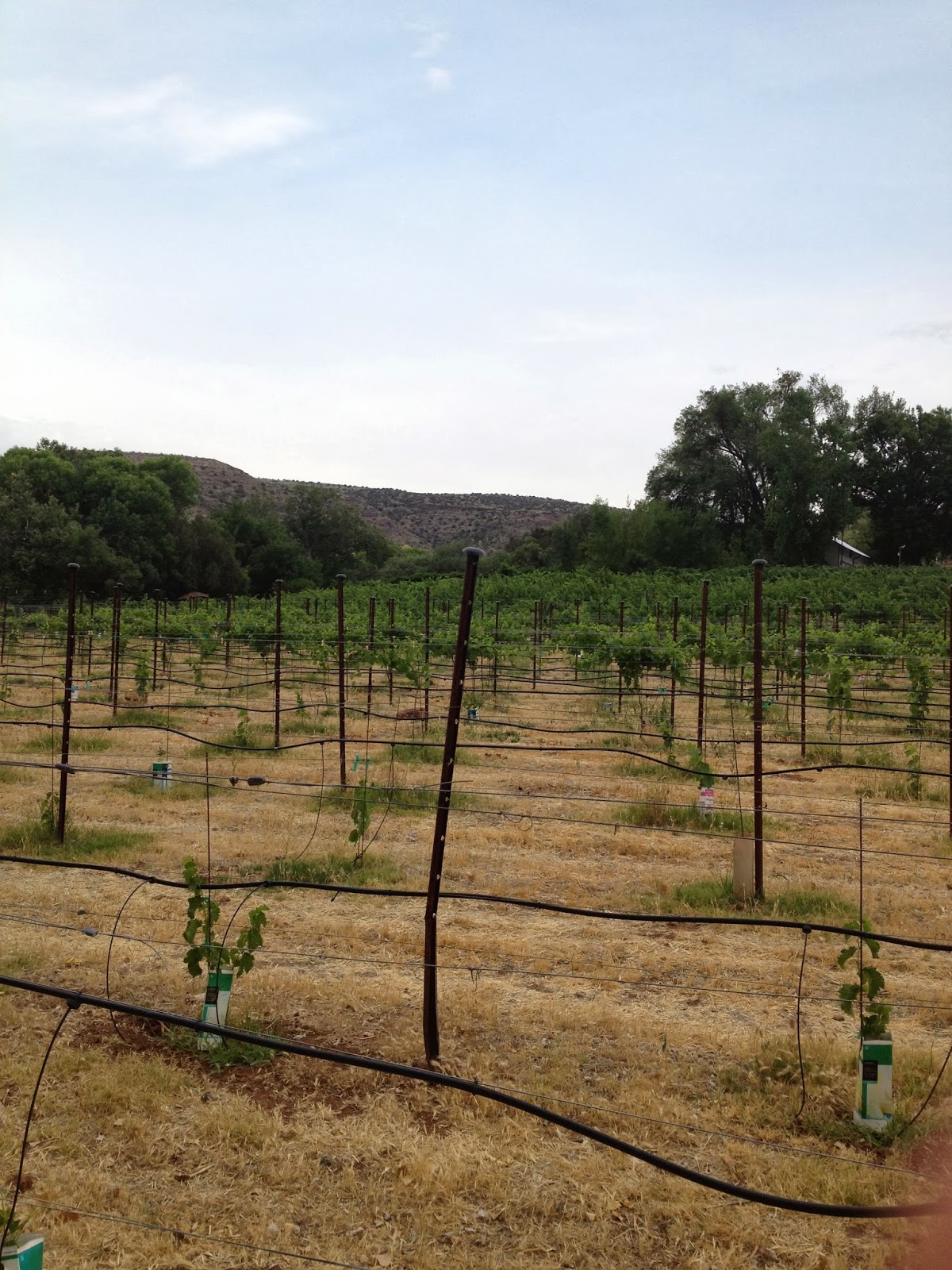 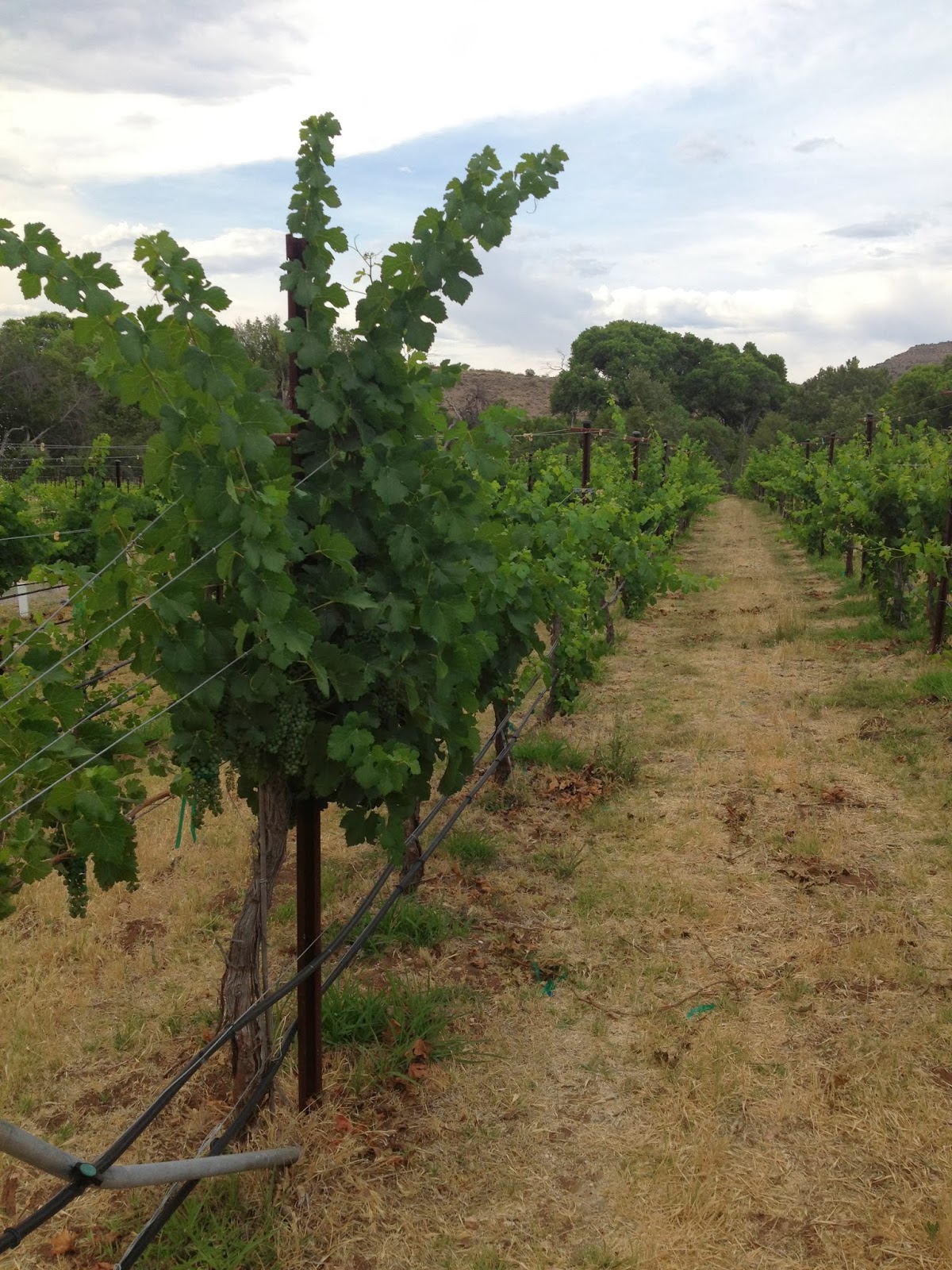 This was my first time as an adult spending time in a vineyard.  The last time I'd been to one, as a pup at the Ste. Michelle winery north of Seattle, I was scratched by a squirrel.  (my dad has suggested I try to feed the damn things).  Walking, with no timeline, through quiet rows of grapevines, glass in hand, no rodents in sight, was therapeutic.

But since you can't spend the night in a vineyard (I mean, I suppose you can, but I have a feeling that it's frowned upon), so we eventually made our way back to the car, the proud owners of a few new bottles of wine.

Now, Jerome itself is tiny.  One can see everything (I am not exaggerating - EVERYTHING) in town over the course of a long weekend.  And we did.  We went to the different tasting rooms (I was saddened that the Jerome Winery tasting room, where my mom and I had gone last year, was closed), walked to the state park - housed at the Douglas Mansion - and back (apparently, not too many people walk to the museum, less than a mile from our B&B, as we got plenty of odd stares from passing cars), lunched with different Arizona beers, and had our anniversary dinner at the Jerome Grand Hotel (sadly, I didn't see any ghosts while we were there - maybe next time). 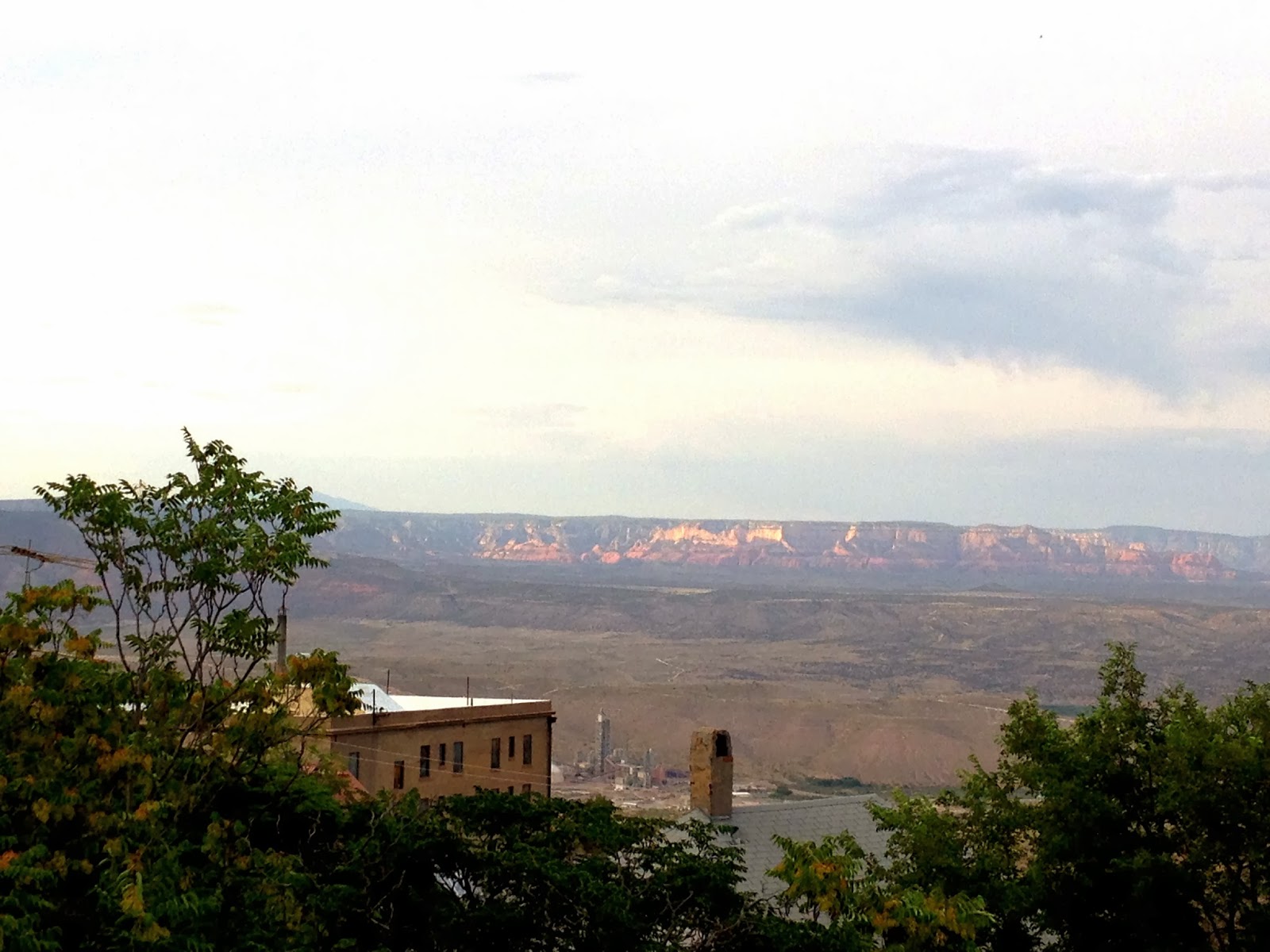 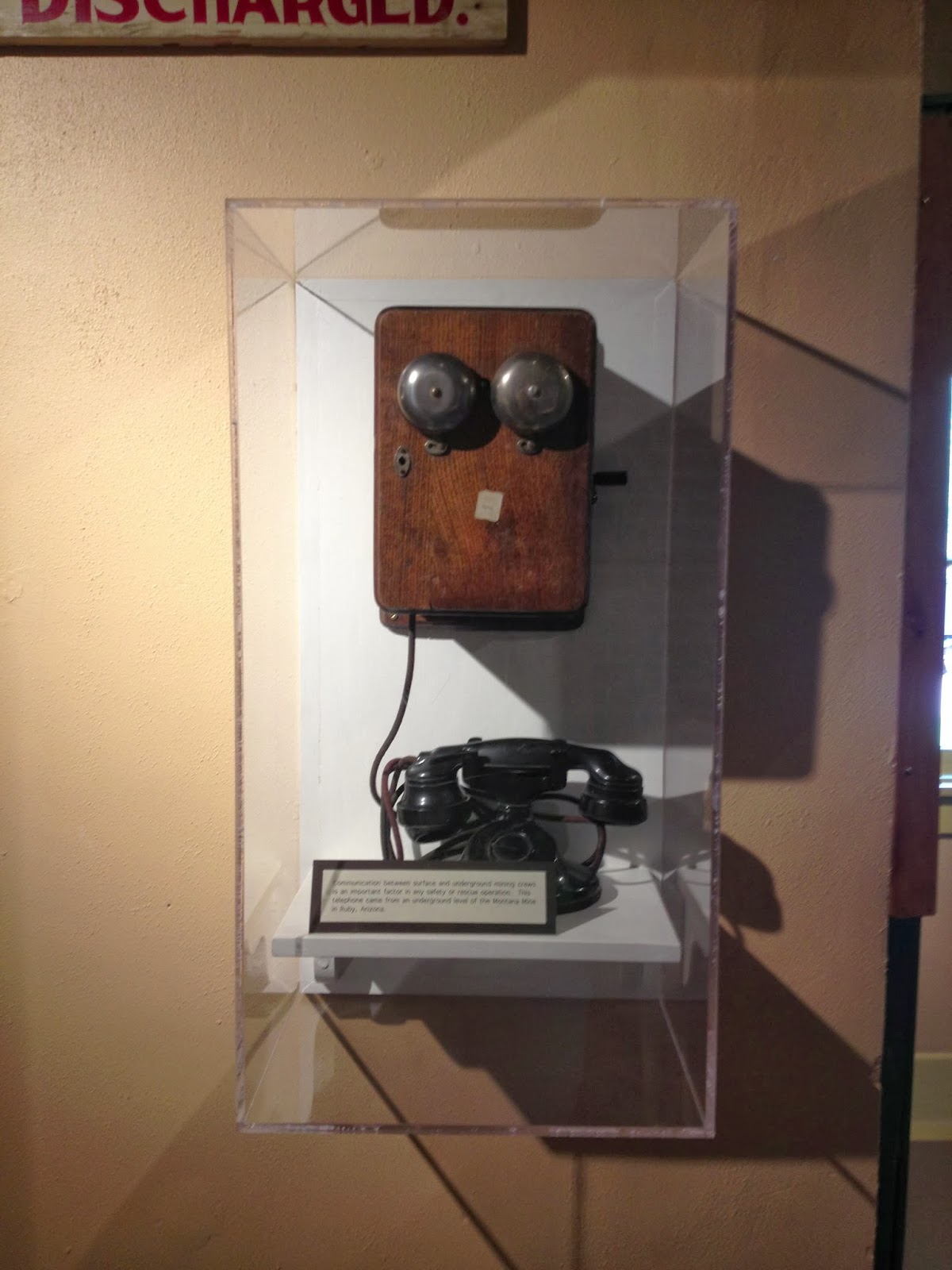 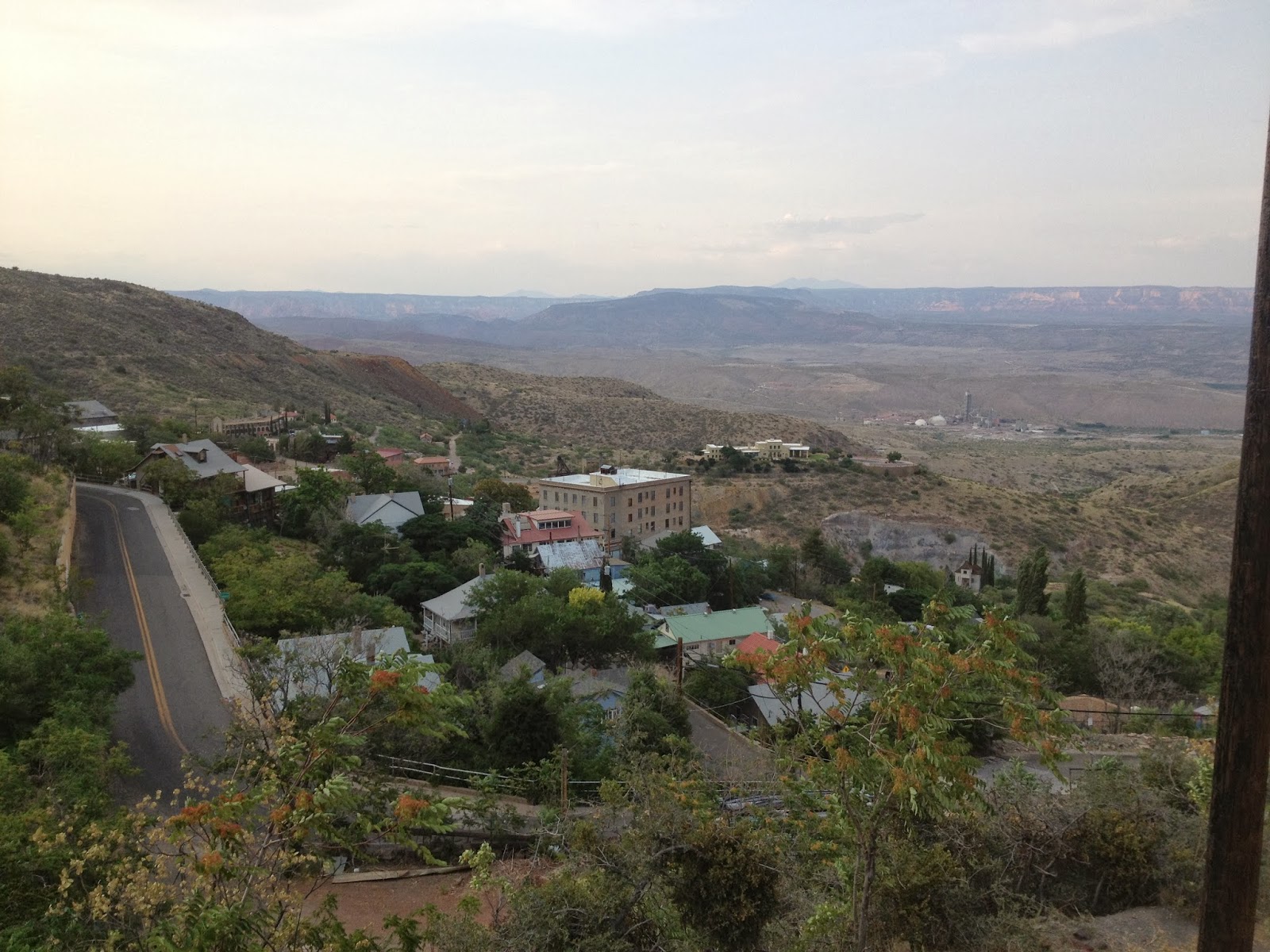 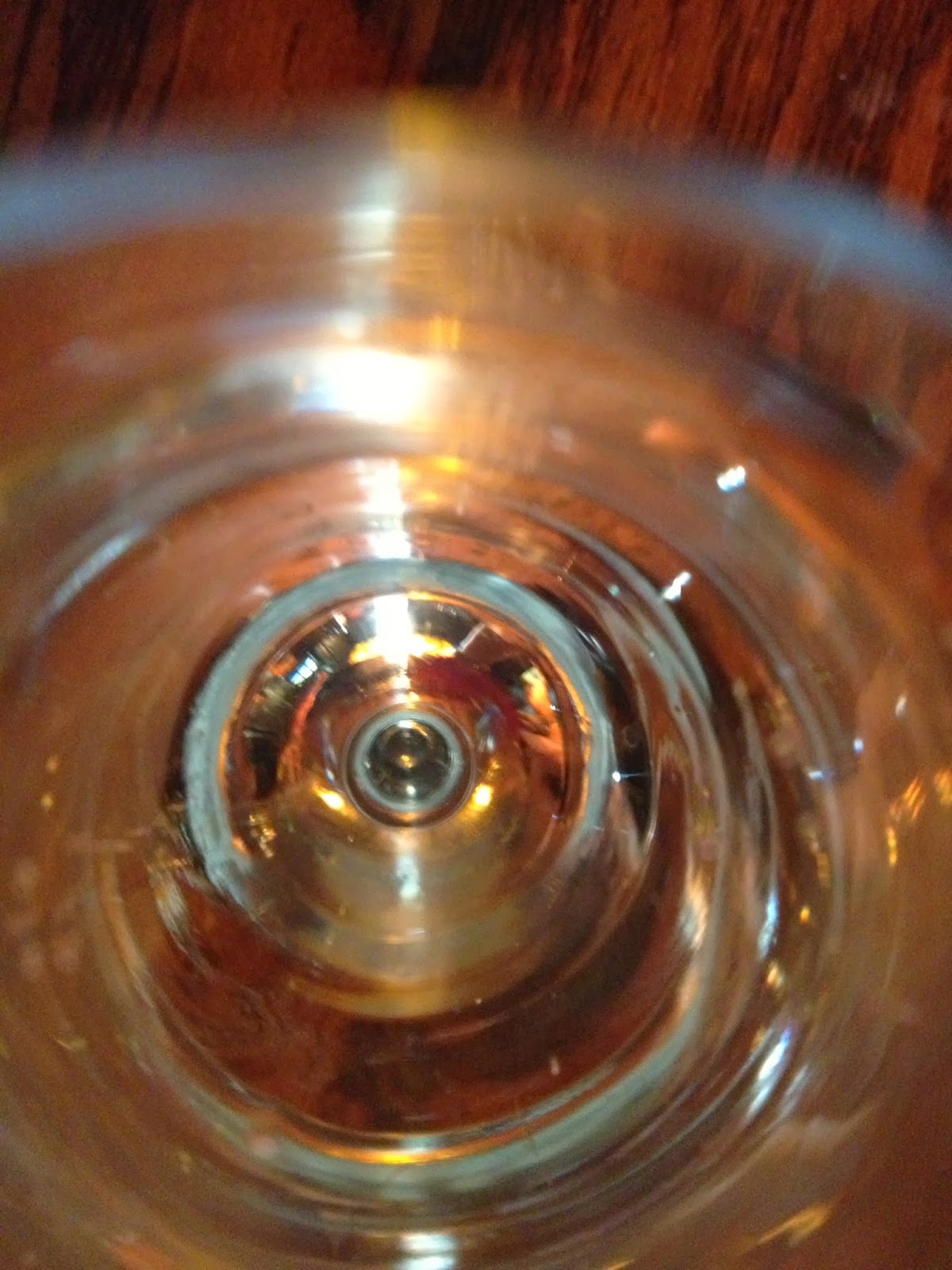 Our last morning offered time only for breakfast before we headed back down the hill to Phoenix.  Jerome itself is on a hill, and that combined with the less than stellar Arizona soil, not much variety grows in Jerome.  However, apricot trees were in full fruit, and our last stop, the Flat Iron - one of the smallest restaurants into which I have ever set foot - offered these amazing waffles with freshly made apricot compote. 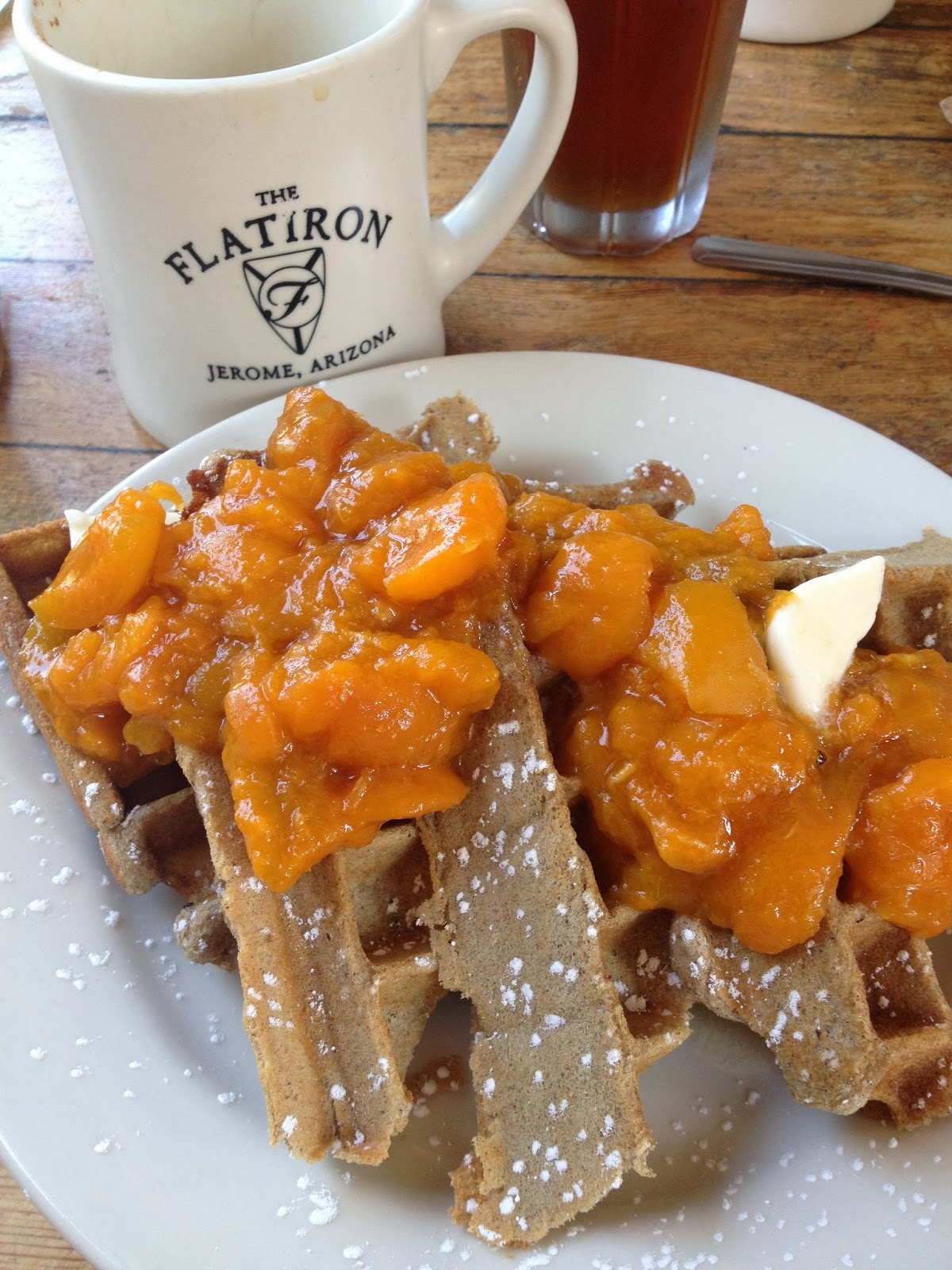 Husband was, truthfully, reluctant at first to head out of town for the weekend, especially to a place where he feared I might geek out over the possibility of ghost spectating.  But as we drove home, exultant and appreciative of being able to spend a weekend together as a reminder of why we got married in the first place, we started talking about where we can go and what we can do next June for anniversary 12, and he was just as engaged in the idea sharing as I was.

Certainly, then, 2014 will host at least one more adventure for the books.
Posted by Allison