For the Love of Dog 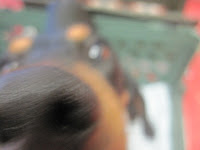 As soon as my bloggy besties and I  decided on cakes for our next round of a theme week, I knew where I was going to turn - pupcakes.  Kat would say that The Universe was telling me to do it.  And honestly - when The Universe says jump...
Since The Husband isn’t a fan of cake but HRH and I are, I knew that having human cakes in the house was just going to be a Bad Idea.  But pupcakes... I can NOT eat those all day!  And, when stored in an area that requires opposable thumbs to enter (a.k.a. the pantry), they can be meted out to those non-thumb-owning beings (coughZooeycough) in an appropriate manner instead of all at once like some nameless coonhounds would prefer to do.
But here’s the thing.  I lavish love on Zooey all the time.  Sometimes it’s in the form of dehydrated cow heart.  Sometimes it’s in the form of a run along the canal.  Sometimes it’s in the form of making eyepatches with her ears to turn her into Pirate Zooey (yarrrr!).  But the important thing is that she is loved every day (yes, I know Cesar tells us that affection is given only after exercise and discipline, but I don’t think you want to read about all the times Zooey has been held in an alpha roll for some transgression).
So when I decided to make pupcakes, I actually had an entirely different audience in mind: the dogs at the Beagles of Arizona Rescue Club (BARC).  This group rescues beagles, tall hounds, and beagle or hound mixes in Arizona.  It is one of the few rescues in the state that helps rescue coonhounds.  I discovered BARC when Zooey was a puppy; I took her to PetSmart (an Arizona-based company) to have her picture taken with Santa, and BARC was the group running the Santa pictures as one of their fundraisers.  Cynthia, one of BARC’s main volunteers, immediately recognized Zooey as a coonhound, which basically sealed the deal - usually people ask if she is a Doberman and give me weird looks when I say the word coonhound.
Many of the dogs at BARC have been abandoned or abused, and some have had to have life-saving surgery (one little guy they have right now had to have his leg amputated after being hit by a car).  Most of them have probably never known what it’s like to get onto the bed to snuggle with loving humans.  Many of them, too, are underweight or have other health issues related to abuse and neglect.  These are the dogs for whom I made my pupcakes, those pups who need to know that not all humans are unkind.

I’ve been wanting to volunteer with BARC for a good long time, but the adoption center is on the north side of the Valley while we live on the south side, so it’s not the easiest to just pop over and visit.  I’m going to try to volunteer once a month at the adoption center, though, as my afternoon was a great time.  I walked Ethel, a beautiful American foxhound, and Autumn, a terrier mix.  Autumn wasn’t so sure about me, but Ethel was excited to sniff every inch of ground she could.  Next time I volunteer, I’ll bring a Gentle Leader or two, since all those scent hounds can be mighty stubborn on the leash.
I honestly fell in love with all of the dogs, even Marbles, the little chihuahua who had to be in the highest fenced area because he climbs out of everything else  I really hope that all of these dogs - and all other rescue pets - will be able to find that loving forever home that they really deserve.  But Darla... I almost actually brought her home.

Darla is a 2-year-old black and tan coonhound who was rescued from Show Low.  She is small - even smaller than Zooey, and I am going to guess that she will never be more than about 45 pounds.  But she is beautiful and sweet and has a lovely bawl mouth (she treated me to her singing a couple of times, but overall she’s pretty quiet and mellow).  I haven’t been able to stop thinking about her, to be honest, and it was hard for me to leave her there in the first place.  However, I learned just last night that she has found her forever home, which makes me so happy for both her and her new human family.  And the good news is that now BARC can take in a new dog who needs to find its forever home, too.
Each of the dogs gobbled up the mini-pupcakes I made (regular sized pupcakes are great for larger dogs like Zooey, but Buster the dachshund, who along with Zooey helped quality test the original batch, struggled until we cut his up for him), some of them horking the treat down whole and some of them licking off the tofu-pumpkin “icing” before enjoying the cake.  I left plenty for another round or two of treats in the fridge, and I’m sure they’ll enjoy those just as much.
While Zooey did not come from a shelter (an illicit love affair at the home of one of The Husband’s former co-workers resulted in a litter of pups), Holden came from the Arizona Humane Society, and I know our next furry kid will come from a rescue.  There are too many animals in shelters or rescues for me to be able to seek one out at a pet store.  I encourage all my readers to consider adopting a shelter pet; many animals are purebreds, so you may find the breed you are hoping for at these places (there are also many breed-specific rescues, like BARC), and you’ll end up saving a life.  What better way to start a relationship than to become someone’s hero?
And when you bring that new family member home, make sure you have a few pupcakes on hand to celebrate. 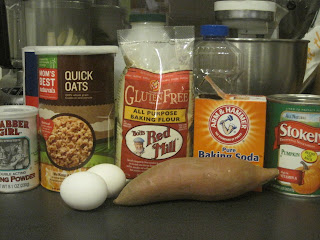 Preheat the oven to 400°.  Spray muffin tins (regular or mini) with cooking spray.
In a large bowl, whisk together the dry ingredients.  In another bowl, combine the pumpkin, water, oil, honey, and eggs.  Once the mixture is evenly combined, stir in the sweet potato and the cheese.  Pour the wet ingredients into the dry ingredients; stir until just combined.
Spoon the batter into the muffin tins, filling nearly to the top (gluten-free flours tend not to rise as much as all-purpose recipes might).  Bake for 10-12 minutes (8-10 minutes for the mini-pupcakes) or until a toothpick inserted into the center of a cake comes out clean.  Let cool completely in a safe, dog-free location. 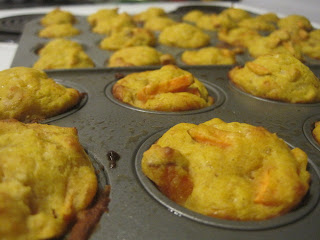 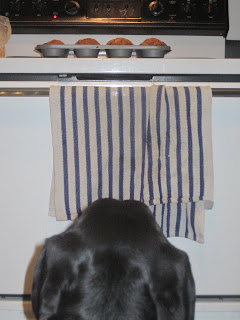 For the “Icing”
Blend the tofu and the pumpkin in the food processor until the consistency is similar to medium firm buttercream icing.  Spread onto the pupcakes with a knife.  Top pupcakes with dehydrated sweet potatoes (because dogs totally appreciate presentation).

You can also use peanut butter or almond butter as the frosting, but I recommend that you use an all natural brand (or homemade) to make sure there aren't yucky things that will make your beloved puppers sick.


In these themed weeks that we’ve had, I think you’ve gotten to know all of us a little better.  Now it’s time to get to know our fuzzy family members.

Huckleberry (a.k.a. Huck, The Dude, Huck-Man, Hey You - Hound - Knock That Crap Off!)
Momma: Megan at Wanna Be a Country Cleaver
Breed: Yellow Labradork (a specific member of the labrador family, not yet recognized by the AKC)
Age: 4
Sign: Capricorn
Likes: Food, treats, a good ass-scratching, feeling the wind whip his ears out a car window, taking up Mom’s space on the bed
Dislikes: People who want to cuddle with him IN BED, getting his feet tickled, his people leaving him
When he grows up, he wants to be: a tracking dog with a search and rescue group, but he’ll be happy to moonlight as a janitor cleaning kitchen floors

Ziggy
Momma: Jeanne at Inside NanaBread’s Head
Breed: Boston terrier (but he does not pahk his cah in Hahvahd Yahd)
Age: 13 in April
Sign: Taurus
Likes: Vanilla soft serve, bacon, long walks on the beach, snuggling, Thai massage
Dislikes: celery, rainy days, bitchy cats, vacuum cleaners
When he grows up, he wants to be: him; he’s not stupid, and he knows he’s spoiled rotten. 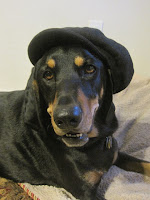 Zooey (a.k.a. Zooey the Devil Dog, Spastic the Blunder Hound, Dammit Zooey)
Momma: Allison - hey, that’s me!
Breed: Black and tan coonhound “mix” (whatever is mixed in there wasn’t mixed well)
Age: 4 in May
Sign: Taurus on the cusp of Gemini
Likes: Sweet potato, pumpkin, kefir, peanut butter, turkey necks, anything stolen off the counter, running with Momma, barking at everything
Dislikes: Ear washings, baths, the cat sleeping on the bed, being left at home
When she grows up, she wants to be: a quality control tester at a natural peanut butter company


Of course, our fur baby family wouldn’t be complete without the feline contingent. 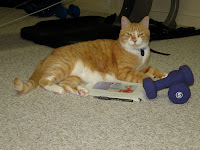 Holden
Momma: Me again
Breed: American shorthair (code for “who knows?”)
Age: 14
Sign: unknown (when we adopted him, all we learned was he was “about 3”), but considering his aloof and unforgiving nature, I’m guessing Scorpio
Likes: Goldfish, tuna, crunchy treats
Dislikes: that damn dog
When he grows up, he wants to be: the benevolent dictator of Earth

Spot
Momma: Kat (although he now lives full time at Kat’s parents house; I’m sure it has to do with treat ratios)
Breed: Siamese (traditional apple head with seal points)
Age: 9
Sign: Gemini (Chinese Zodiac - horse)
Likes: Olives, maple and brown sugar oatmeal, biting ankles, hand-tied fleece blankets, squeaky mice, going outside on the leash
Dislikes: Getting off the table during dinner time, red-tailed hawks, the neighborhood fox, most non-family members, the doorbell
When he grows up, he wants to be: Kat’s grandmother, who was a lifelong smoker.  Even though there is no tobacco at his domicile, Spot sometimes smells like he just smoked a pack, so he may in fact be a reincarnation already.
One last thing - don’t forget that Kirsten is hosting a link party for the cakes that you love, and if you missed one of my girls’ cakes, don’t delay - all the other ones are intended for human consumption!
Monday - Raspberry-Filled Cupcakes with Milk Chocolate Icing from Kirsten at Comfortably Domestic
Tuesday - Molten Lava Cake from Mads at La Petite Pancake
Wednesday - Ice Cream Cakelettes from Jeanne at Inside Nanabread’s Head
Thursday - From-Scratch Funfetti and Sprinkles Bundt Cakes from Kat at Tenaciously Yours,
Friday - Sweet Potato and Pumpkin Pupcakes from Yours Truly
Saturday - Ombre Rose Cake from Megan at Wanna Be a Country Cleaver