New Orleans is one of my "bucket list" Locations To Visit.  While part of me would rather visit during a less crazy time, there is something intriguing about heading there for the biggest party of the year.
Since The Husband and I are both busy, especially on a week that begins for us on a Tuesday, we celebrated Mardi Gras on Monday - Lundi Gras!

Our appetizer was orange-glazed beets.  This is definitely an 11/10, and I was left wishing we had a LOT more beets.  The original recipe calls for canned beets, but I would recommend using fresh and roasting them in a bit of extra virgin olive oil to get that caramelization that only roasting can give you; it adds some amazing depth and texture. 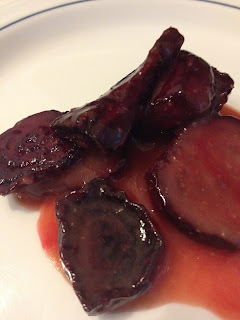 Then... slow cooker red beans and rice.  I really liked this recipe - and The Husband went back for seconds!  WOO HOO!  I used a red onion, green red onions, and green garlic for the added veggies, but I definitely think that this is a recipe that's versatile, and I also think that next time I might add another tablespoon of Tony Chachere's (I think I may have accidentally inhaled too much of it - hello, runny nose!). 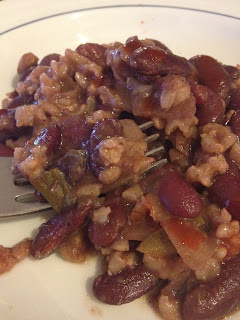 And finally, the pièce de résistance (hey, we're going with a French theme here) - the King Cake.
I used a dried kidney bean for the Cake Baby.  The thought of baking a piece of plastic into my cake kind of freaked me out.
HRH's favorite part was the colored sugar sprinkles, but I love that since this is a yeast-based cake, and one that really isn't too sweet (unless you drown it in the icing), I can use it for French toast or even a sandwich should I feel the urge.  I did use dried cranberries and apricots instead of the candied citron, and I used less nutmeg than called for but added a good deal of cinnamon for a flavor that both The Husband and I would like (HRH just likes cake in general; she wasn't going to complain). 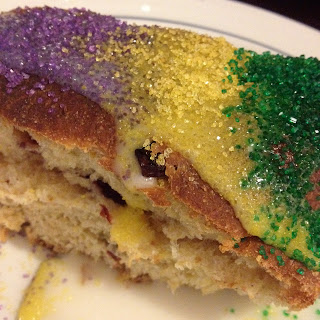 Sadly, I didn't get any beignets or even Pazcki, but there's always next year.  Or later this week. :)
Posted by Allison